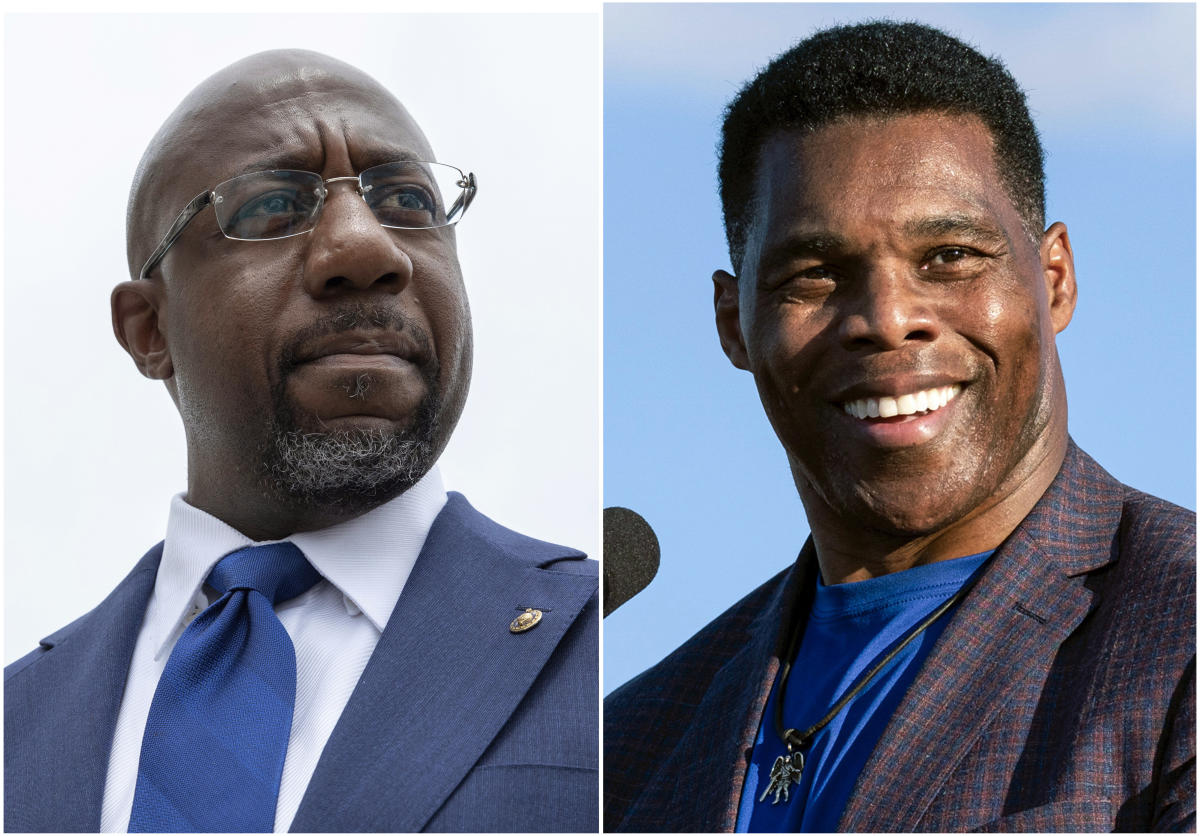 ATLANTA (AP) — In-person early voting for the last U.S. Senate seat is underway statewide in Georgia’s runoff, with Democratic Sen. Raphael Warnock working to get the jump on Republican challenger Herschel Walker who is putting less emphasis on advance balloting.

After winning a state lawsuit to allow Saturday voting after Thanksgiving, Warnock spent the weekend urging his supporters not to wait until the Dec. 6 runoff. Trying to leverage his role as pastor of Martin Luther King Jr.’s church and Georgia’s first Black U.S. senator, Warnock concentrated his efforts Sunday among Black communities in metro Atlanta.

“What we are doing right now is soul work,” Warnock said at Liberty International Church southwest of downtown, where he rallied supporters before leading a march to a nearby early voting site where he cast his ballot. “We are engaged in a political exercise,” Warnock continued, “but this is moral and spiritual work, and for us that has always been based on the foundation of the church.”

Warnock led Walker by about 37,000 votes out of about 4 million cast in the general election but fell short of the majority required under Georgia law, triggering a four-week runoff blitz. Warnock first won the seat as part of concurrent Senate runoffs on Jan. 5, 2021, when he and Sen. Jon Ossoff prevailed over Republican incumbents to give Democrats narrow control of the Senate for the start of President Joe Biden’s tenure. Warnock won a special election and now is seeking a full six-year term.

This time, Senate control is not in play, with Democrats already having secured 50 seats to go with Vice President Kamala Harris’s tiebreaking vote. That puts pressure on both Warnock and Walker to convince Georgia voters that it’s worth their time to cast a second ballot, even if the national stakes aren’t as high.

As of late Sunday, almost 200,000 ballots had been cast in the relative handful of counties that opted to have weekend voting. That total was built on long lines in several heavily Democratic counties of metro Atlanta, enough to give Democrats confidence that their core supporters remain excited to vote for Warnock. But the total remains a small fraction of the nearly 2.3 million early in-person voters ahead of the Nov. 8 general election.

And Democrats remain cautious given that the early voting window is much shorter than two years ago, when the second round spanned two months between the general election and runoff. Voting on Saturday was allowed only because Warnock and Democrats sued amid a dispute with the Republican secretary of state over whether Saturday voting could occur on a holiday weekend.

The senator followed up with a parade of Black leaders for weekend rallies and a march reminiscent of voting rights demonstrations during the civil rights movement.

“We have one vote here that can change the world,” Andrew Young, a former Atlanta mayor and onetime aide to King, implored Black voters on Sunday. Rising from his wheelchair to speak, the 90-year-old former congressman and U.N. ambassador reminded the assembly of the congressional compromise that ended post-Civil War Reconstruction and paved the way for Jim Crow segregation across the South.

“One vote at the end of the Civil War pulled all of the Union troops out of the South and lost us the rights we had fought for in the war and that people had fought for us,” he said, starting “a struggle that we have been in ever since.”

Warnock was shifting to a suburban focus late Monday with an evening concert headlined by the Dave Matthews Band.

Walker, for his part, has drawn enthusiastic crowds in the early weeks of the runoff, as well, and his campaign aides remain confident that he has no problem among core Republicans. His challenge comes with the middle of the Georgia electorate, a gap highlighted by his shortfall compared to Kemp.

“I feel Herschel Walker benefited by having Brian Kemp in the original election on Nov. 8, and I think Kemp not being there will hurt the Republicans a little bit,” said Alpharetta resident Marcelo Salvatierra, who voted for Republican Kemp and Democrat Warnock and still supports the senator in the runoff.

Salvatierra said he backed Kemp’s re-election “because it seems to me Georgia has done well.” But Republicans at the federal level, he said, never offered a serious counter to Democratic control of Washington, while Walker also comes with considerable personal baggage.

“Character matters and I sense he doesn’t have character,” Salvatierra said.

Warnock has encouraged that sentiment among core Democrats, independents and moderate Republicans. For months, he’s said Walker, a former football star making his first bid for public office, was “not ready” for the Senate. In recent weeks, he’s ratcheted up the attack to say Walker is “not fit,” highlighting the challenger’s falsehoods about his accomplishments in the private sector, along with allegations of violence against women and accusations by two women that Walker encouraged and paid for their abortions. Walker, who backs a national ban on abortions without exceptions, denies that he ever paid for any abortions.

Check out https://apnews.com/hub/explaining-the-elections to learn more about the issues and factors at play in the 2022 midterm elections

Police wrap probe into woman who escaped handcuffs, jumped on I-485 in Charlotte