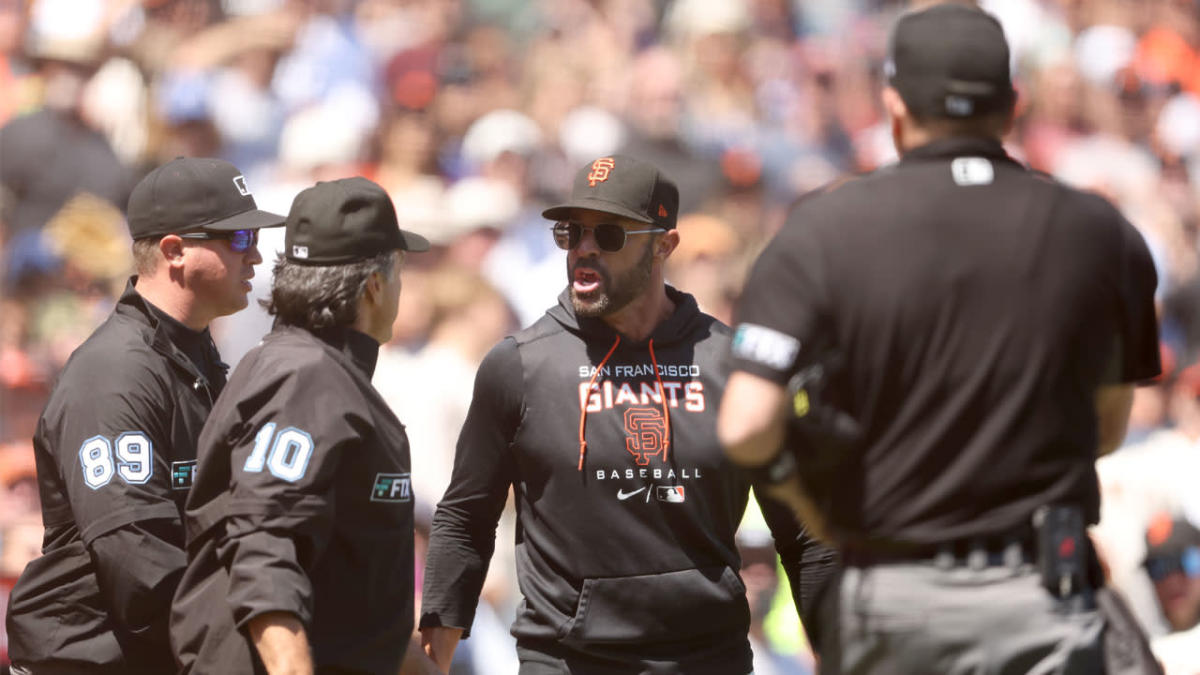 SAN FRANCISCO — Gabe Kapler has spent a lot of time this season preaching the importance of keeping your cool. Carlos Rodón has been his best player, but at times after Rodón’s emotion has shown on the field, Kapler has talked about how it’s important to conserve that energy for the mound.

But there was none of that in the sixth inning Thursday. For the first time in 328 games as Giants manager, Kapler did not finish the game on the top step of the dugout. He was ejected after arguing with crew chief Phil Cuzzi, which followed left-hander Jarlin García’s brief exchange with Los Angeles Dodgers star Mookie Betts.

It all could have been much ado about nothing, but the frustration has boiled over for the Giants. Pitchers are throwing their arms up in disbelief when balls sneak through the shift. Players are often seen slumping on the dugout rail. And on Thursday, Kapler was ejected after trying to protect a pitcher who chose about the worst possible time to taunt the Dodgers.

“Who wouldn’t be frustrated,” Kapler said afterward. “We’re all frustrated. We don’t want to play like this.”

A fiery Gabe Kapler was ejected following Jarlin GarcÃ­a’s exchange with Mookie Betts to end the top of the sixth inning ð® pic.twitter.com/nTdngYWJCw

Kapler does not believe that making a public show of your displeasure is a realistic way to fire up a team, and he’s probably right. The Giants went down in order the next three innings. Trea Turner added insult to ejection by hitting a homer to pad the lead and then doing the Dodgers celebration — which Garcia had mocked — on his way past the Giants dugout.

The Giants lost 5-3, falling to 3-12 since the All-Star break. Eight of those losses have come against the Dodgers, marking the first eight-game losing streak to the Dodgers within one season since 1979. You have to go back an additional two years to find the last time the Dodgers came to San Francisco and swept a four-game series.

This is a search for rock bottom right now, and the Giants are falling further and further back in the NL Wild Card race. They trudged back to the clubhouse on Thursday with a six-game deficit. They are closer to the Arizona Diamondbacks in the standings than they are to the St. Louis Cardinals or the Philadelphia Phillies.

Kapler came from Philadelphia, and he got ejected four times there. But he has been a picture of zen in San Francisco — until Thursday.

A fiery Gabe Kapler was ejected following Jarlin GarcÃ­a’s exchange with Mookie Betts to end the top of the sixth inning ð® pic.twitter.com/nTdngYWJCw

Garcia, who has had a rough stretch on the mound, struck out rookie James Outman and then glared into the on-deck circle, where Betts — who had won a game with a homer off Garcia last month — was standing. Garcia mocked the Dodgers’ celebratory head-tap.

“I did the same gesture that they do when they hit a home run,” Garcia said through interpreter Erwin Higueros. “He did that against me the other day when he hit a home run and I thought, let me do the same thing. He signaled for me to come towards him and that was it.”

Kapler wasn’t thrilled with the taunting and was ready to address it when Cuzzi came over to warn both benches and eject Garcia. Soon, Kapler was letting him have it. It was certainly as fired up as he has been on the field since taking over in San Francisco.

“I didn’t think it was an appropriate action,” he said of the conversation with the umpires. “If I could have slowed down and just articulated exactly as I just did, I would have. But I wasn’t happy with it and probably didn’t handle it perfectly.”

The Giants will have a day to cool off, as the schedule has given them an extremely rare off day on a Friday. Then it’s two against the Oakland A’s, who are rebuilding but have won nine of 13 and always play the Giants tough. After that, a trip to Juan Soto’s new home: Petco Park.

It won’t get any easier for the Giants, and they’re running out of time and answers. Even Kapler’s first blow-up didn’t fire up the group. Less than an hour later, the rest of the Giants joined him in a quiet clubhouse.