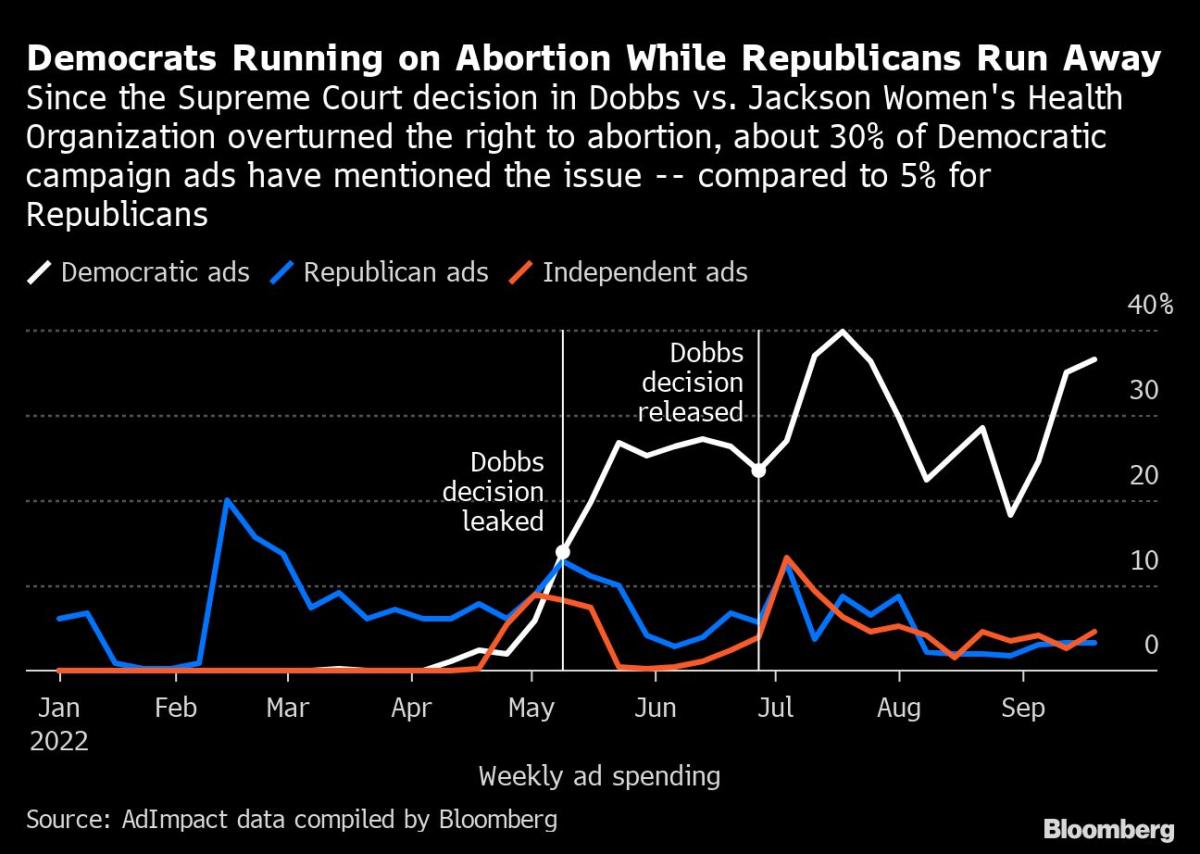 (Bloomberg) — Senator Lindsey Graham’s proposal for a nationwide abortion ban has jolted the Republican strategy for dealing with the contentious social issue and gives Democrats a new line of attack less than two months before the midterm elections.

Since the Supreme Court overturned the Roe v Wade decision legalizing abortion many Republicans have been trying to straddle the gap between the party’s core voting base — which has long sought that outcome — and independent voters who polls show are in favor of abortion rights and whose support will be key to the outcome in several electoral battlegrounds.

That has meant playing down the issue in many Senate campaigns and deferring to the states. At least a dozen have bans and more are considering restrictions. Graham’s proposal, announced Tuesday, for a ban after 15 weeks of pregnancy, with exceptions in cases of rape, incest or to protect a woman’s life has tossed the issue back into the congressional campaigns.

The conflict was illustrated Wednesday as the most endangered Senate Republican, Ron Johnson of Wisconsin, treaded delicately in a hallway interview with reporters.

“I believe, as I’ve always believed, that the profound moral issue of abortion should be decided by we the people in 50 states,” he said. “At this point in time, I don’t think we should replace nine justices with 535 members of Congress.”

When asked about his support for previous version of the Graham bill, which had banned abortions after 20 weeks, Johnson said circumstances have changed.

“That’s when Roe was in place,” he said. “Now the decision is going where it should be made, by we the people in 50 states and that’s what I support.”

Republican leaders had been focusing the party’s midterm campaign on President Joe Biden’s handling of the economy, particularly inflation. But Graham changed the subject to abortion, an issue that has benefited Democrats, on the same day that the government reported that the Consumer Price Index shot up more than forecast in August.

Senator Mike Rounds, a South Dakota Republican, said that any of his colleagues had the right to propose legislation, but that it would be better to keep the spotlight on the economy.

“I think the subject should be on what most people are worried about right now, which is the kitchen-table issues,” he said. “Inflation is still running well over eight percent.”

Democrats have eagerly seized on the initiative by Graham, a South Carolina Republican, to highlight the differences between the two parties on abortion. Senate Majority Leader Chuck Schumer said the GOP is “like the dog who caught the bus.”

Democrats in many pivotal Senate races have been campaigning on preserving abortion rights since the Supreme Court’s ruling in June, bringing the subject up in speeches and ads.

The approach is bolstered by polling. Six in 10 registered voters surveyed in an August Wall Street Journal poll said abortion should be legal in most or almost all cases, up from 55% before the Supreme Court ruling. More than half of those polled — 56% — said the high court’s decision makes them more likely to vote in November, a number that jumps to 83% among Democrats.

Republican candidates for the Senate are divided in their approach, which swiftly became apparently after Graham made his announcement, particularly among those in the tightest races that will decide control of the chamber.

Don Bolduc, who won Tuesday’s GOP Senate primary in New Hampshire to run against the Democratic incumbent, Maggie Hassan, said he wouldn’t support Graham’s legislation because “it makes no sense.”

“The Supreme Court has already decided that this is a state issue,” he said in an interview with Fox News. “The states have it. That’s where it needs to be.”

In Arizona, Republican Blake Masters, who is challenging Senator Mark Kelly, the Democratic incumbent, had scrubbed his website on abortion rights last month to de-emphasize the issue, NBC reported.

But Masters released a statement saying he backs Graham’s measure.

“I hope it passes. If it doesn’t, I suggest and will introduce a third-trimester standalone bill. Certainly we can all agree that in America, we shouldn’t tolerate late-term abortion like China and North Korea do,” he said.

Yet not all Republicans are conflicted. Marco Rubio of Florida, who also is facing a close race for re-election, said he supports Graham’s effort and that politics isn’t part of his considerations.

“I’ve never analyzed this politically. We’re talking human life. I’m pro-life. That’s never been a mystery, I’ve never hidden that, and I’ll vote for any bill that helps it,” he said.

Rubio, however, said Graham’s bill wouldn’t pass, and predicted the issue would be decided in the states. He said the onus should be on what restrictions Democrats would support.

The Democratic-controlled House in July passed legislation that would codify the rights under Roe v Wade. It would bar limits on performing an abortion before fetal viability — typically around 24 weeks — as well as abortions after fetal viability when the pregnancy poses a risk to the patient’s life or health.

Roe and the 1992 Planned Parenthood v. Casey decision protected the right to abortion until about 24 weeks of pregnancy.