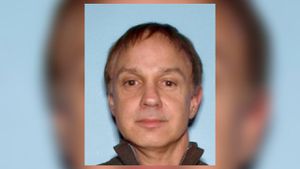 The United States Marshals Service has captured a international fugitive and child sexual predator and returned him to Georgia.

Marshals had been searching for Brad Hatter since he went into hiding five years ago.

The USMS said Hatter organized a meeting with the young girl online and then went to the planned location, where he was arrested.

In May 2007, he was convicted of attempting to entice a minor to engage in sexual activity and sentenced to 108 months in prison. He was released from detention in September 2017 and required to register as a sex offender.

On January 21, 2018, officials said Hatter stopped reporting to his probation officer and stopped registering as a sex offender.

Probation officials then contacted the U.S. Marshals, who began their hunt.

The USMS said during the five-year search for Hatter, they learned that he had left the United States and traveled to the Philippines. Later, he was located in Mexico —where he worked as a teacher. On Saturday, after a brief pursuit, Mexican authorities captured Hatter.

US Marshal for the Northern District of Georgia, Thomas Brown, spoke about the investigation and arrest.

“Since 2018, Mr. Hatter has been looking over his shoulder, knowing one day Deputy United States Marshals would find him. On Saturday December 3rd, that day arrived. The U.S. Marshals would not give up their hunt. Hatter is now back where he belongs, in the custody of the United States Government,” Brown said.

Hatter was returned to the United States on Sunday and placed in detention.