Five animal hearts laid out in a pattern and surrounded by a circle of candles have been found at a beauty spot as part of an apparent Satanist ritual.

Photos show the meat laid on a triangulation point following an elaborate ceremony at the top of Stagbury Hill in the New Forest.

A member of the public discovered the hearts and cleared them up before reporting it to the police – who told locals they are patrolling the area in the national park.

The grim scene was found close to a church where a dead cat was last month found by congregation members hanging ‘horribly’ from a flagpole, forcing the vicar issue a warning about the prospect of witchcraft. 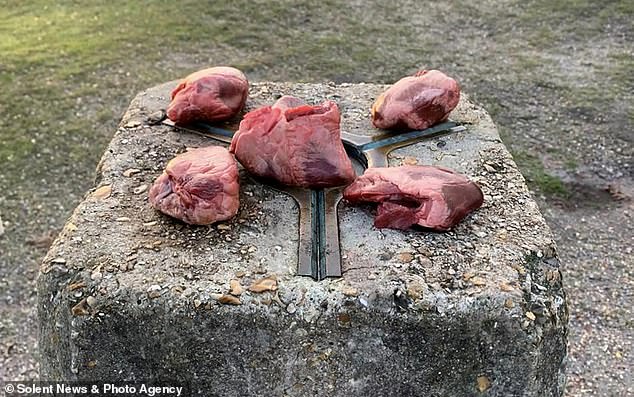 Five animal hearts surrounded by candles have been found at a beauty spot at Stagbury Hill, the New Forest, as part of an apparent occult ritual 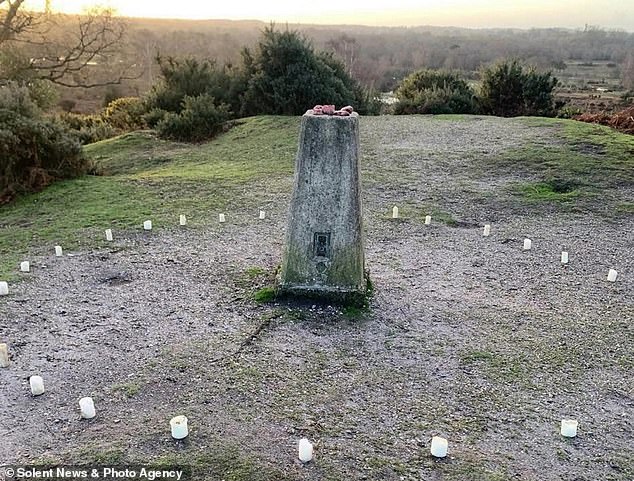 Last month the vicar of the church in Bramshaw, Hampshire, warned of ‘sinister’ goings-on after the bodies of dead animals were discovered deliberately left there.

Reverend David Bacon raised the prospect of ‘witchcraft’ after the cat was found just before Christmas.

Just a few weeks before this, a dead fox was found on the doorstep of the 12th century church.

After this latest hilltop discovery, a Facebook user commented: ‘Weird – connected to the cat strung up the flagpole and the dead fox left on the church steps?’

Another said: ‘Very odd! Probably linked to the strange things left at the church recently?’

A fellow social media user added: ‘Perhaps the idiots thought the Trig Point was a sacred druid shrine or something?’ One commenter said: ‘Could have poison in it, some strange ritual’ and posted an emoji of a witch. 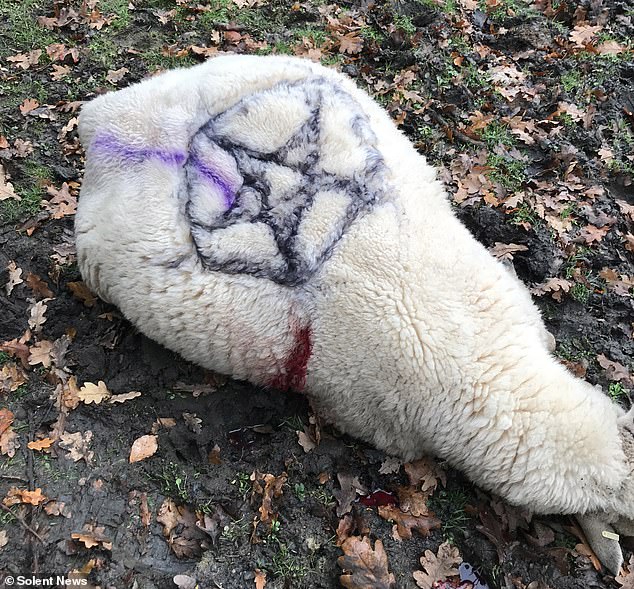 The vicar said: ‘It’s really unsettling and sinister for everyone. We’re not sure what will happen next, if anything’ 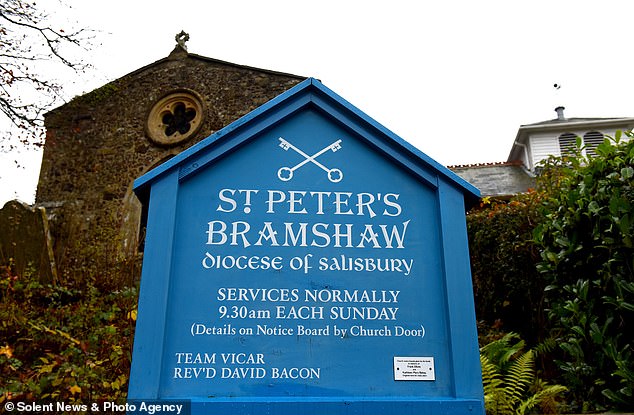 Rev Bacon said the group of ladies who found the cat when they came to clean St Peter’s Church and get it ready for Christmas had been left ‘unsettled’.

In 2019, the same New Forest village was terrorised by suspected Satanists who stabbed sheep and sprayed them with pentagrams and graffitied Rev Bacon’s medieval church with the same occult markings.

He said last month: ‘The cat – rather horribly – was found hanging from the flagpole. The fox was left on the doorstep, but it’s very unlikely it died there naturally.

‘The cat was found by a group of ladies on Monday. They were coming in to clean the church for Christmas but found it on the flagpole. It was really upsetting for them.

‘Every so often we get things like this happening. It makes everybody feel very uncomfortable.

‘I can’t say definitively if it’s linked to the sheep killings from a few years ago. We have no idea what motivated this. Are they just angry at life in general, or against the church, or is it linked to witchcraft? I can’t say. 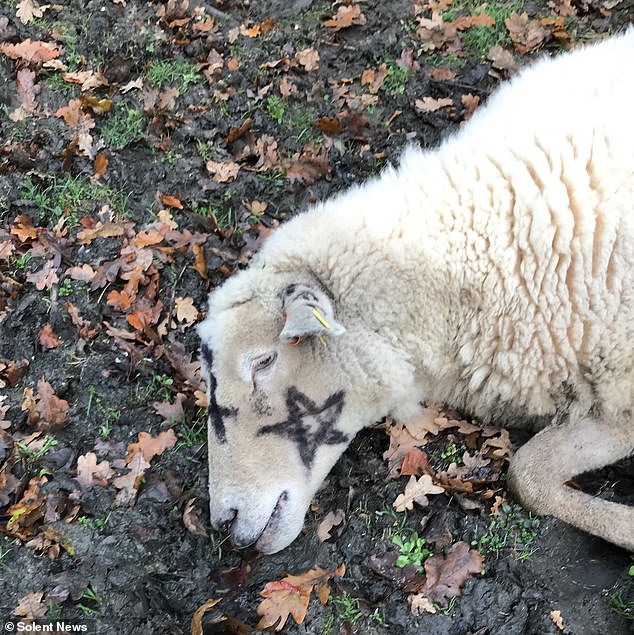 Reverend Bacon said he is unsure who is behind the ‘sinister’ conduct, suggesting it could be people ‘just angry at the world’ or people concerned with witchcraft

‘But the sheep killings were much more sophisticated. The dead fox felt a lot less organised.

‘It’s really unsettling and sinister for everyone. We’re not sure what will happen next, if anything.

‘I have no idea why it is happening in our area. If it is connected to witchcraft, then the New Forest has been linked to witchcraft for hundreds of years.

‘But it could just be random acts of nastiness. It’s all pretty horrible for those who find the dead animals.’

A spoesperson for Hampshire Police said: ‘We received a report of meat found on the top of Stagbury Hill with candles placed in a circle around it. This was spotted by members of the public at around 7.45am on 13 January.

‘The items were disposed of before the report was made.

‘We have conducted enquiries and will continue to patrol the area.’

Alternative religions including Satanism, Paganism and Shamanism have seen an explosion in the number of followers in the decade between the 2011 and 2021 censuses. 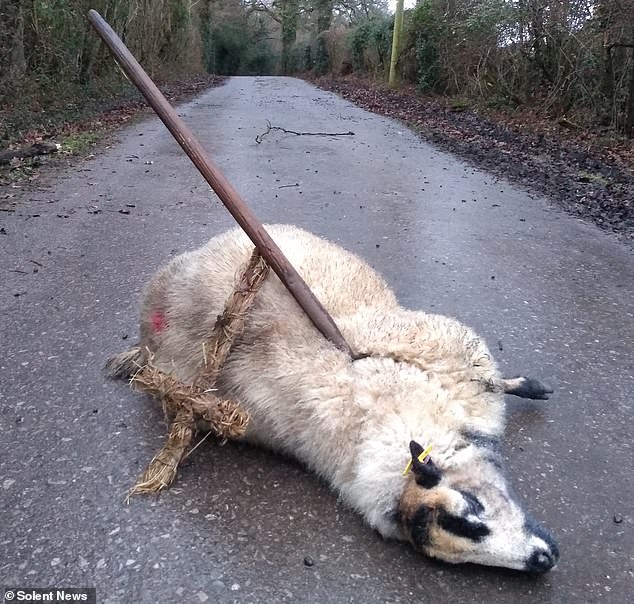 The highest number of Satanists are in the South East, rising by 165% to 795 in the region in 2021, according to the latest census.

Head of the UK chapter of The Global Order of Satan Andy Diabolus said ‘proud’ of the rise in followers marked on the census after efforts to encourage Satanists.

Followers say the religion is ‘built on the self and in carrying out Satan’s work with humanity’ by challenging ‘authoritarianism and injustice’ through ‘acts of compassion and the practice of empathy’.

Despite common misconceptions, Satanists do not actually worship the Devil, as they are atheists and do not believe in the supernatural.

‘We revere ourselves as individuals capable of the greatest human expression of compassion and empathy,’ The Global Order of Satan’s FAQ explains.

Satanism’s follower numbers in England and Wales have been overtaken by Shamanism, which had less than 1,000 followers in 2011 but saw a more than 12-fold growth in a decade.