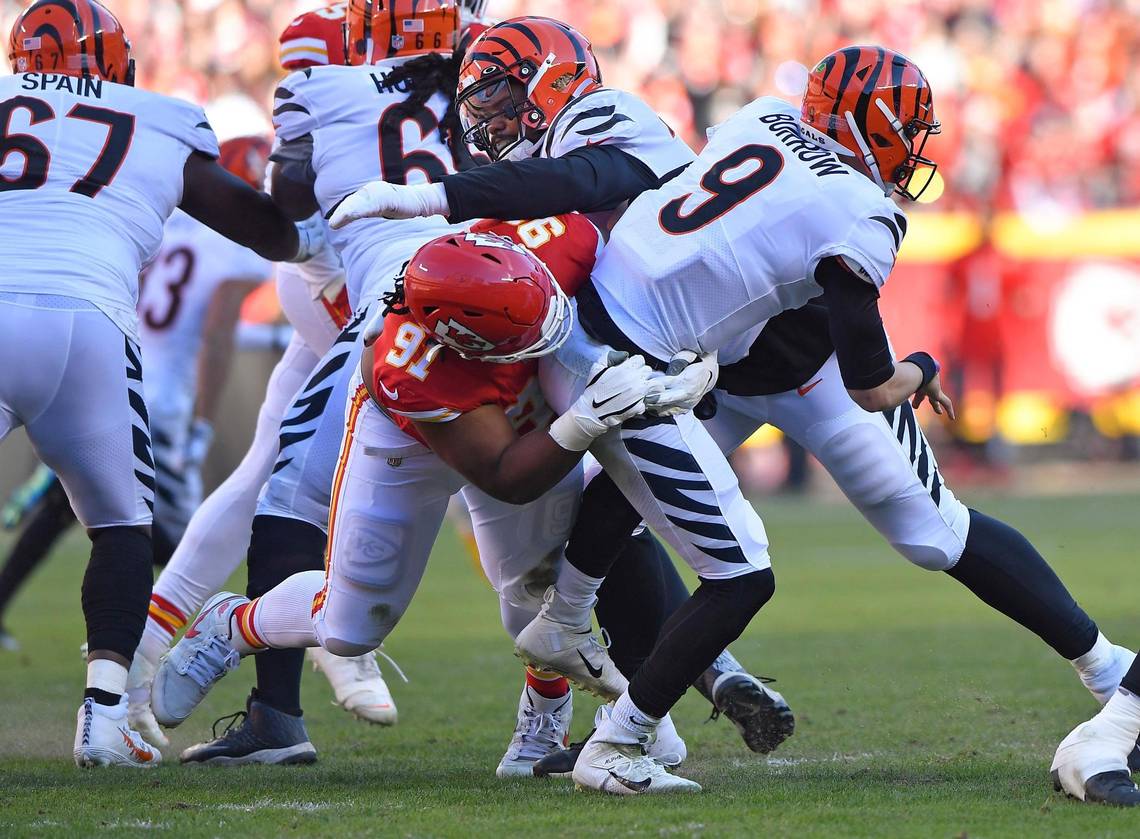 The Chiefs have the best record in the AFC, but are they being overlooked?

Former NFL wide receiver Brandon Marshall believes so, and he made that case this week on “Inside the NFL” during a discussion of the league’s elite teams.

“You’ve got Patrick Mahomes who is probably going to win MVP again. He’s having his best year ever. But we’re not talking about him. He’s leading the league in touchdowns and yards. The offense – they’re the best out there. But we’re not talking about it. Travis Kelce — every other game he’s breaking some type of record. It’s time for us to talk about the best team in football.”

Whether or not the Chiefs are being overlooked is debatable, but there’s no question that a win Sunday against the Bengals would boost their chances of being the top seed in the AFC playoff field.

A 31-30 Cincinnati win is the prediction from NFL.com’s Gregg Rosenthal. This is an excerpt from his story: “Can the Bengals beat the Patrick Mahomes-led Chiefs three times in a row? If last week’s performance by both Bengals lines was an indication, the answer is yes. Cincy’s secondary is a huge concern, and this is likely to be a shootout.”

The two writers at Pro Football Talk were split. Michael David Smith predicted a 31-28 Chiefs victory. He wrote in part: “I think we’ll see a third great game between Patrick Mahomes and Joe Burrow on Sunday. This time Mahomes’ team will come out on top.” Florio sees a 27-23 Cincinnati victory. He wrote: “The Bengals love being under radar. It may not last much longer.”

A 33-27 Chiefs win is the prediction from FanSided’s Matt Verderame. He wrote: “Best game of the weekend. Cincinnati is playing great and Kansas City is hellbent on revenge. This could be the ultimate Patrick Mahomes regular-season moment.”

Half of the eight writers at CBS Sports see the Chiefs winning: Pete Prisco, Jared Dubin, Ryan Wilson and Jamey Eisenberg. Taking the Bengals: Jason LaCanfora, Will Brinson, John Breech and Dave Richard. Prisco predicted a 35-24 score. He wrote in part: “This Chiefs team is the best in the league right now. Patrick Mahomes and the passing game will be tough to stop. But so will Joe Burrow with Ja’Marr Chase back. This will be a shootout. Chiefs win a close one.”

A 30-27 Cincinnati victory is the prediction from Bill Bender of the Sporting News. Here is part of what he wrote: “The Bengals will be more versatile, multiple and explosive around Joe Burrow with Joe Mixon and Ja’Marr Chase likely to return to help the power running and deep passing games. In another epic duel, Mahomes gets edged by a Burrow-led field-goal drive on the last home possession.”

Two of the three Pro Football Network reporters went with the Bengals: Adam Beasley (27-24 final score) and Dallas Robinson (29-26). The choice for the Chiefs: Dalton Miller (31-27). Here is bit of what Robinson wrote: “Kansas City has the best offense in football, but Cincinnati’s defense found a strategy that worked in that AFC title game. Coordinator Lou Anarumo dropped eight defenders into coverage on a season-high 35% of pass plays, stifling Mahomes and holding the Chiefs to just three points in the second half and overtime.”

A 31-27 Chiefs win is the prediction from Yardbarker’s Chris Mueller. Here is a snippet from his story: “I would say that the Chiefs were playing with their food against Los Angeles just like Miami was against Houston, but that would be disrespectful to the Rams’ defense, not to mention too charitable to Kansas City’s offense, which was sloppy at times, particularly in the second half, despite not needing to do much of anything against an impotent opponent. They’ll need to be much better if they want to avenge last year’s AFC Championship Game loss.”

All five Audacy writers think the Chiefs will win.

UFC on ESPN 42 bonuses: A Fight of the Year contender is an obvious winner

Florida Gov. Ron DeSantis (R) holds a 9-point lead over former President Trump in a hypothetical head-to-head match-up in the...