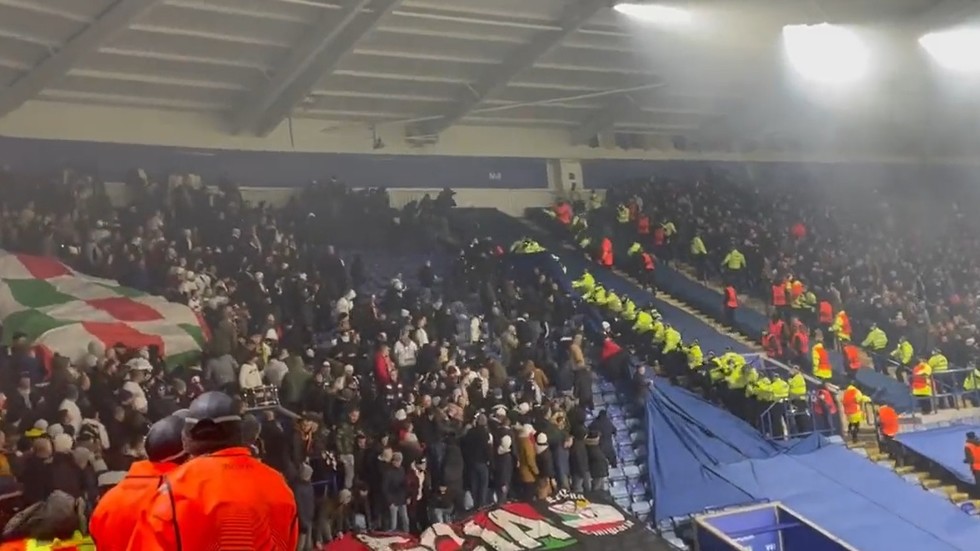 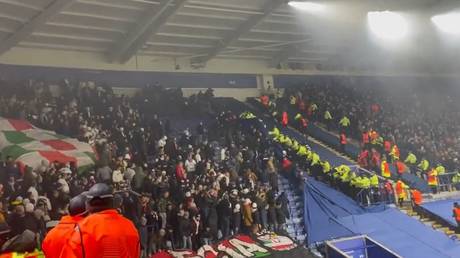 The UEFA Europa League match between Leicester City and Legia Warsaw was marred by ugly scenes in the stands as visiting clashed with police in what observers claimed was a planned attack which made use of a smokescreen.

Legia fans packed the away section at Leicester’s King Power stadium for Thursday night’s encounter, and during the action set off red flames en masse.

That created a wall of smoke and appeared to be the signal for dozens of them to wade across seats which were covered in tarpaulin to help segregate supporters.

How did the Legia Warsaw fans sneak this many flares into the King Power ? Great display but did they use the smoke to them attack the police ? #lcfc #leicester #warsaw pic.twitter.com/ScS8McMmJt

Flares in the Legia Warsaw corner after 70 minutes at the King Power stadium tonight – a smoke screen for a concerted scramble across the seats by the away fans towards the police and Leicester fans. Disappointing, but City fans were immaculately behaved from what we saw #LEILEG pic.twitter.com/E3Pp5Mj6eB

Attempting to breach the thin dividing line, hooligans were seen trading blows with police before reinforcements in riot gear moved in to quell the violence.

🚨⚽️ | NEW: Police in riot gear now in the ground due to problems with Legia Warsaw fanspic.twitter.com/Yep049dHqh

🚨 | NEW: A policeman gets kicked down the stairs at the Leicester gamepic.twitter.com/8T0O1cfoEN

The unsavory scenes were captured from fans inside the stadium – with numerous reporters such as Henry Winter of The Times suggesting that the smokescreen from the flares had provided cover for the attack.

Online, one football fan perversely dubbed it a “hooligan masterclass” from the Legia thugs.

50 to 100 Legia Warsaw fans climb across tarpaulin to attack police, leaning across and throwing punches at police. More police arriving. Tarpaulin ripped away. Uefa will hammer Legia Warsaw for this. #LEILGW

Legia Warsaw had a hooligan genius masterclass today, let of loads of flares then use the smoke screen to attack Leicester fans without police noticing

Local police later reported that officers had been hurt in the fracas.

“Long day/night. A number of arrests have been made of away supporters during the evening, some officers have been injured,” read a tweet.

“Thanks to you LCFC fans for your support, further updates will follow in the coming days.”

Thousands of Legia Warsaw fans are at the King Power tonight.

On the pitch, Leicester picked up a 3-1 win which moved them to the top of Group C, one point ahead of Spartak Moscow and Napoli ahead of the final round of group-stage matches in two weeks’ time.

Leicester travel to Napoli on December 9 while Spartak take on Legia in Warsaw at the same time. All four teams in the group are in with a chance of qualifying for the knockout stages.

Booster jabs for over 50s set for mid-December

‘Not a surprise’: Pele’s daughters give update from hospital on football icon

Bayern’s Kimmich out with lung problem after COVID infection

F1 extends contract to race in Abu Dhabi through 2030