What investors need to hear from Tesla this week: Morning Brief

Europe Is Bracing for a Sharp and Abrupt Real Estate Reversal

Are we still in the throes of a global supply chain crisis?

Is crypto better or worse since its collapse? Here's what CEOs at Davos said

Tax season 2023: Here’s everything you need to know about deadlines, refunds, audits and more

Wong, 71, has witnessed a series of upheavals, from the crisis of confidence when China and Britain started to negotiate the handover of Hong Kong in the early 1980s to the 1997 Asian Financial Crisis and the Covid-19 pandemic since 2020.

“The 12th one is looming as many developed countries, such as the US and many in Europe, are on track to face an economic recession, high inflation and high-interest rate,” he said.

He urged business leaders to share their own experiences and to offer job opportunities for the youth, particularly in the Greater Bay Area.

“The Greater Bay Area is a market with more than 10 times the population of Hong Kong. It is a market with an economy bigger than South Korea. It is an area that can provide a lot of opportunities for young people in Hong Kong,” he said.

Beijing introduced the Greater Bay Area project in February 2019 to turn nine cities in southern Guangdong province, Hong Kong and Macau into an integrated economic powerhouse. With Hong Kong as the financial hub, Shenzhen as a technology powerhouse and several neighbouring cities as manufacturing centres, the region is expected to see steady growth.

“It is not just the business community’s duty; youngsters themselves also have a role to play. They need to think of how to add value to the companies and also need to learn how to cope with the challenging times,” he said. 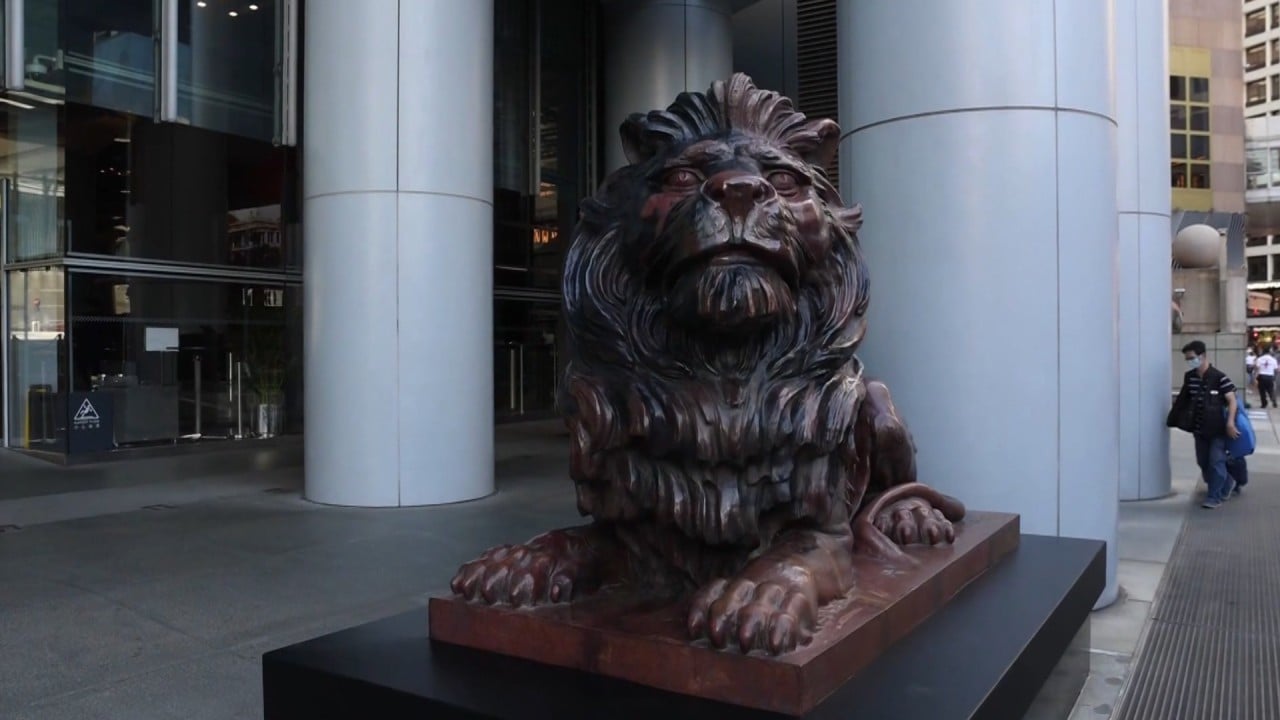 “They should follow the spirit of HSBC’s iconic lions, Stephen and Stitt. For almost a century they have safeguarded the bank amid war, economic downturns and social unrest,” he said. They embody Hong Kong’s spirit of resilience, he added.

The two lion statues have stood guard at the entrance of the HSBC headquarters in Central since 1935.

Wong recalled that during the Asia financial crisis, a reporter had asked him if “Hong Kong is over.”

“My simple answer was ‘definitely not’. Hong Kong will never die, but it will come back [stronger]. The key is for all in Hong Kong to focus on things that could benefit the city instead of damaging it,” he said. “Some talents may migrate to other countries as we have seen since the 1980s but we have also seen many talents come back when they have found good opportunities.”

He said that in the post-Covid world, Hong Kong no longer can rely on trade, retail or tourism and that it needs to promote fintech and other technology to “embrace the new era”.

Wong is probably the highest-profile banker in the city – people carry banknotes with his signature around in their wallets every day. He is the only banker whose signature is on both HSBC and Standard Chartered banknotes. Executives of the city’s three note-issuing banks must sign the money.

Wong’s name appeared on Standard Chartered notes when he headed the bank between 2000 and 2005, and on HSBC notes after he accepted former HSBC chairman David Eldon’s invitation to jump ship in April 2005.

Peter Wong, non-executive chairman of HSBC Asia-Pacific, is the only person whose signature is on the banknotes of HSBC and Standard Chartered. Photo: Enoch Yiu

He joined HSBC in 2005 as group general manager before becoming the chief executive for Asia-Pacific in February 2010 and non-executive chairman in 2021.

Under his leadership, HSBC’s Asia-Pacific business turned into the bank’s growth engine. The pre-tax profit from Asia-Pacific in the first nine months this year represents 80 per cent of the total, compared with only 34 per cent in 2005 when Wong joined.

Wong, who turned 71 last month, said although he considers himself to be semi-retired he had no plans to quit.

“I still love my job and my life at HSBC and will continue to contribute to the bank, giving advice and also working on charity programmes that benefit the community of Hong Kong.”

Femail asks expert WHY marriage is on the decline

If you are about to have a baby, chances are you are more likely to be unmarried than married. Figures...

By Luc Cohen NEW YORK (Reuters) – Opening statements are set to begin on Monday in the U.S. trial of...

BOSTON (AP) — The daughter of U.S. Rep. Katherine Clark of Massachusetts was arrested during a protest Saturday night on...

Novak Djokovic braves the barbs and strolls on towards title No10

Novak Djokovic was firing on all cylinders as he dismantled home favourite Alex De Minaur to reach the quarter-finals of...

A 40-year-old man has died after being hit by a London bus in an alleged ‘hit and run’. The incident happened...

Novak Djokovic was firing on all cylinders as he dismantled home favourite Alex De Minaur to reach the quarter-finals of...

5 biggest takeaways from UFC 283: Can Deiveson Figueiredo make an impact at 135?

Thoughts and analysis of the biggest storylines coming out of UFC 283, including Deiveson Figueiredo's plan to leave flyweight behind.

Dillon Brooks, Desmond Bane among Memphis Grizzlies who didn't understand why Shannon Sharpe was allowed to remain after incident in...