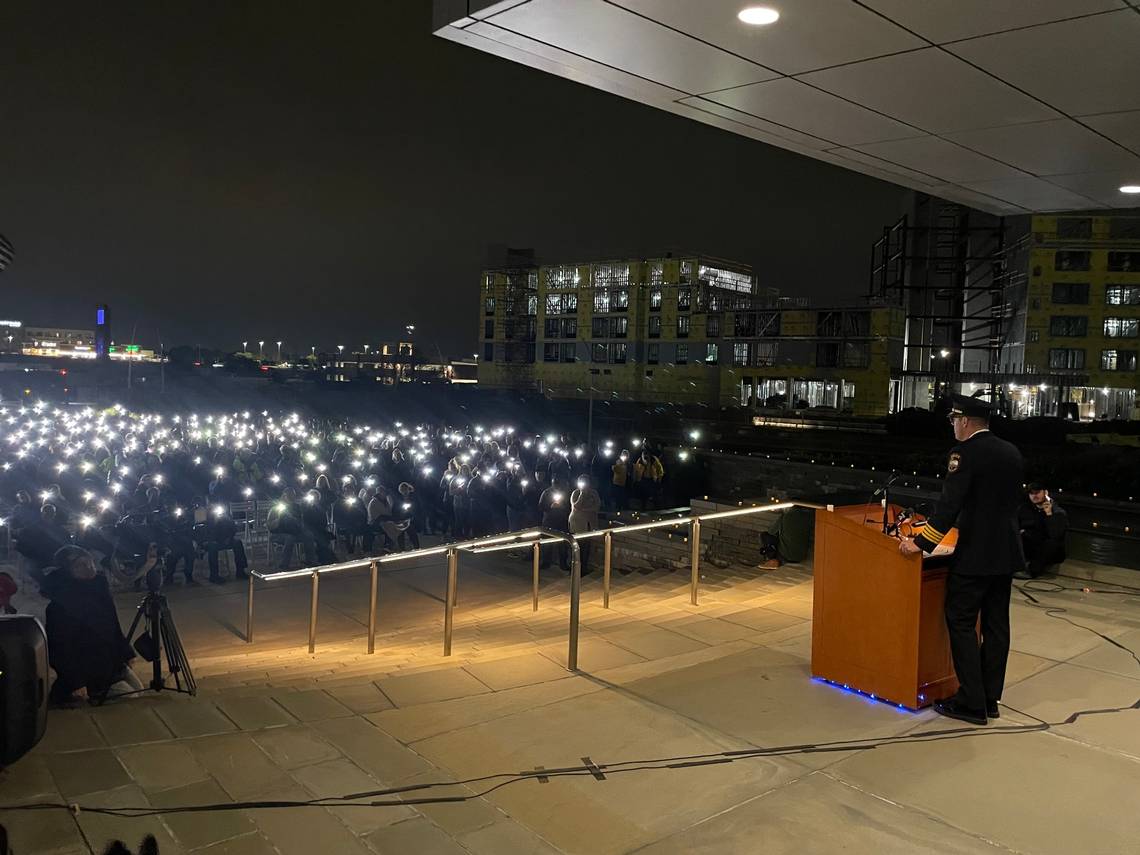 Around 200 people gathered outside the Grand Prairie police station on Friday night to pay respects to the police officer who was killed in a crash on Monday while pursuing a suspect.

Brandon Tsai, 32, was killed when his police vehicle hit another then crashed into a light pole while pursuing someone who police said tried to evade a traffic stop initiated because of fake paper license plates.

Police on Thursday arrested Colbie Hoffman, 22, and charged him with evading arrest or detention causing a death and tampering with physical evidence. Police said Hoffman confessed, after turning himself in to the Dallas police, that he was the one driving the vehicle that Tsai and another officer were pursuing.

Officer Brandon Paul Tsai tried to stop the car near the intersection of SW 3rd Street and Pioneer Parkway around 10:45 p.m., leading the the crash, according to police.

Hoffman also was booked on eight additional Class C misdemeanor warrants out of Waxahachie, Bedford, Desoto and Grand Prairie that were outstanding at the time of the crash, police said.

Tsai died in Methodist Dallas Medical Center later that night from his injuries.

Grand Prairie Police Chief Daniel Scesney said at the vigil that Tsai had “timeless qualities” of a good police officer, such as compassion, devotion and grit. Scesney asked the hundreds of people gathered to raise their cell phones with the flashlights turned on in lieu of candles.

Scesney said Tsai’s death is a loss for everyone in the community, but that the vigil was not a time “to discuss the darkness in our society. … We’re here to reject evil and evil doers.”

He said that honoring Tsai was not just about remembering him, but acting in a way that would make him proud.

“We’re charged with making sure his legacy lives on forever,” Scesney said.

Scesney said that was significant to the law-enforcement community, sending a message that the investigators and officers who were working to find the man Tsai was pursuing wouldn’t rest until they saw him arrested.

He added that law-enforcement officers are still mourning the death of Tsai, but they will keep working to do their jobs in the community.

“Officers don’t get time down to grieve,” Scesney said. “They have to stay on the mat.”

Over the past week, people have flocked to the Grand Prairie police headquarters to lay flowers and attach patches, stickers, flowers, balloons cards and flags on a police patrol vehicle set up outside the building in honor of Tsai.

The public also is invited to attend a memorial service at 11 a.m. Monday at Gateway Church, 2404 N. Carrier Parkway.

Current affairs talk丨Overseas Chinese in Thailand: full of confidence in the great rejuvenation of the Chinese nation

Giuliani Whines That Trump Treated ‘Worse Than a Terrorist’