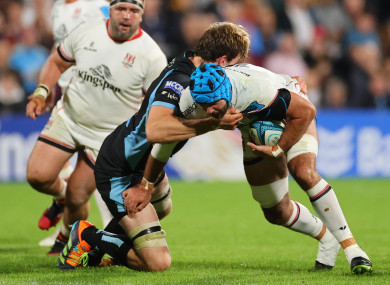 FOR A LONG time, Mick Kearney thought that was it, his rugby career was over. Back in Ireland after a two-year spell in Parma with Zebre, the former Ireland Under-20s lock had set himself a deadline of the end of September for when he would announce his retirement.

Having made a name for himself at Connacht, been a part of the all-conquering Leinster squad in the late 2010s and then had “a great experience from a rugby, lifestyle and cultural point of view” in Italy with Zebre, the former Mount Temple man is forthright and honest when he admits that passion for the game was no longer there.

So, back home in Dublin over the summer, he held out hope that an opportunity would arrive that he was interested in, something that would help him rediscover his love for the game, all the while making plans for life after rugby. He had already begun to assemble a crew to go to work with the family building company back if it did prove to be game over.

Then Dan McFarland called with the lifeline he had been waiting for.

The Ulster head coach was aware of what Kearney was about from when they worked together in Connacht for four years from 2011 to 2015 and, facing a second row shortage at Ulster with the likes of Iain Henderson, Kieran Treadwell, Dave O’Connor and Cormac Izuchukwu sidelined, he turned to a familiar face to fill in the gaps.

“I was putting a (building) team together in the middle of September, and then thankfully the call came through,” laughs Kearney. 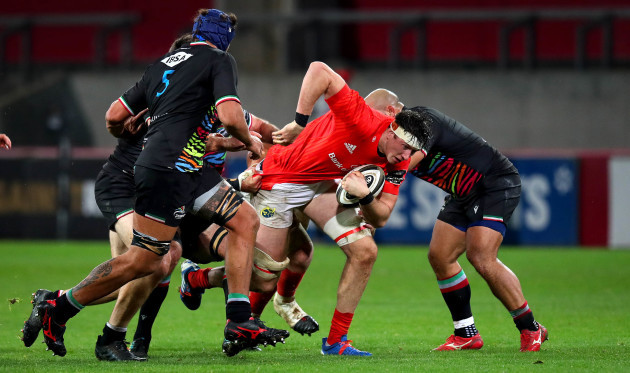 Kearney faced Munster when he was at Zebre

After the offer of a short-term deal at Kingspan Stadium was placed in front of him, Kearney made a quick follow-up call to former Leinster and Zebre team-mate Ian Nagle, who played for Ulster on a similar deal, in the 2018-19 season. Kearney admits he had already pretty much made up his mind, but the ringing endorsement from his good friend pushed him over the line.

“Ian had an unbelievably positive experience here before he went to Zebre. It’s something we would have spoken about over the last two years,” adds the 30-year-old lock.

“He said it was the most positive experience of his whole career, so for him to say that after being at the likes of Munster, Leinster, Newcastle, London Irish and Zebre was all I really needed to hear because we’d be very good friends and I trust his opinion. So once I heard that it was a no-brainer.”

In a candid chat for the first time since linking up with his third Irish province, Kearney admits he had made peace with his decision to hang up the boots had Ulster not made the call. Had he done so, he would have gone out having lived a career that many would gladly have taken if offered.

The passion had just waned somewhat. While he insists he has nothing but positive things to say about his time in Parma, he was in an environment with few fluent English speakers and where wins were few and far between, while also dealing with the impact of Covid-19. By the end of his two years with Zebre, the drive was no longer what it was. 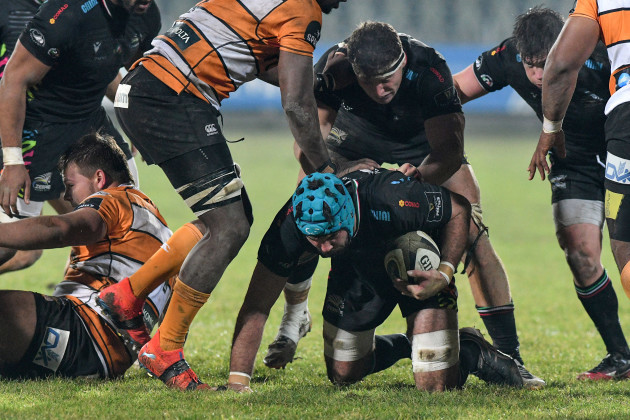 Kearney in action for Zebre against Cheetahs.
Source: Federico Matteucci/INPHO

“When I came back from Italy I’d kind of fallen out of love with the game a small bit. I just wasn’t enjoying it but I still knew that if I could get my foot in the door in a good environment that I would really enjoy it again. That was more or less the bones of it,” he explains.

“There were a handful of clubs I would have been excited to play for, so I came home and kept fit, but I basically set a date of the end of September and I said to myself if nothing had come up at the clubs I’d be interested in joining then I was just going to move on, get away from rugby and do something else.

“But I’ve settled in really well (at Ulster), I’ve thoroughly enjoyed being part of an Irish set-up again. It’s been really enjoyable to be back around the Irish lads and the Irish craic, and then the flipside of that there’s the intensity and the ambition of the actual environment, that’s just fantastic to be around.”

You can tell. Despite acknowledging that his career was less than a month away from coming to an end only a few weeks ago, Kearney is in a relaxed mood during the interview, and breaks out in a wide smile when he reveals he gets “20 or so” responses every time he suggests a round of golf in the Ulster WhatsApp chat.

He was thrown in at the deep end, straight into the starting line-up for their pre-season friendly against Saracens the same week he first joined the team, and he has played in all three of Ulster’s United Rugby Championship games so far, starting one – against former side Zebre, ironically – and coming off the bench in the other two.

He’s not just blending in either. Kearney’s influence has been rather noticeable, and not only for the striking blue scrum-cap he’s brought with him from Italy to Kingspan Stadium. Aggressive in both the carry and at the breakdown, he has provided an edge to Ulster’s forward play in their early United Rugby Championship games.

Still, there is a realisation that this could all be taken away from him in a heartbeat. He is, after all, only on a short-term deal and with Treadwell and O’Connor back in the fold for tomorrow’s game against the Emirates Lions, he may find himself outside a match day squad for the first time this season.

But it’s that buy-in of being ready to go and available that he’s trying to show to the coaches and convince them he should stick around longer term. And, even if they don’t, he’s also trying to leave a lasting legacy if his stay does prove to be in months rather than years.

“I’ve tried to share my experiences with some of the young guys coming through, the likes of Harry Sheridan, who I think is going to be an off the charts player. I’m trying to build on what some of the experienced players here have already brought, and hopefully I’ve done that in some small sense,” says Kearney.

“Every game is a trial. Every game is a chance to impress. If you don’t go out and perform, then that’s all it’s going to be, a trial and nothing more. So I’ve tried to approach it from a day to day mentality.

“If you watch Hard Knocks, the documentary on the NFL, they can get a knock on the door any day and you’re on waiver wires. You’re gone. I’ve tried to have a similar enough mentality with this experience and the pressure of that has made it very enjoyable.”

And, for his part, Kearney doesn’t want this journey to end. The job on the family firm is there waiting for him whenever it does, but the lock is optimistic he won’t need it any time soon.

“In terms of being an opportunity after this, the answer is I don’t know,” he admits. “But I’d love to stay. I’ve really enjoyed the experience so far.”

In the Dehcho, a one-man air charter firm connects communities