1,000 Covid Cases In 2 Days In Haridwar As Millions Gather… 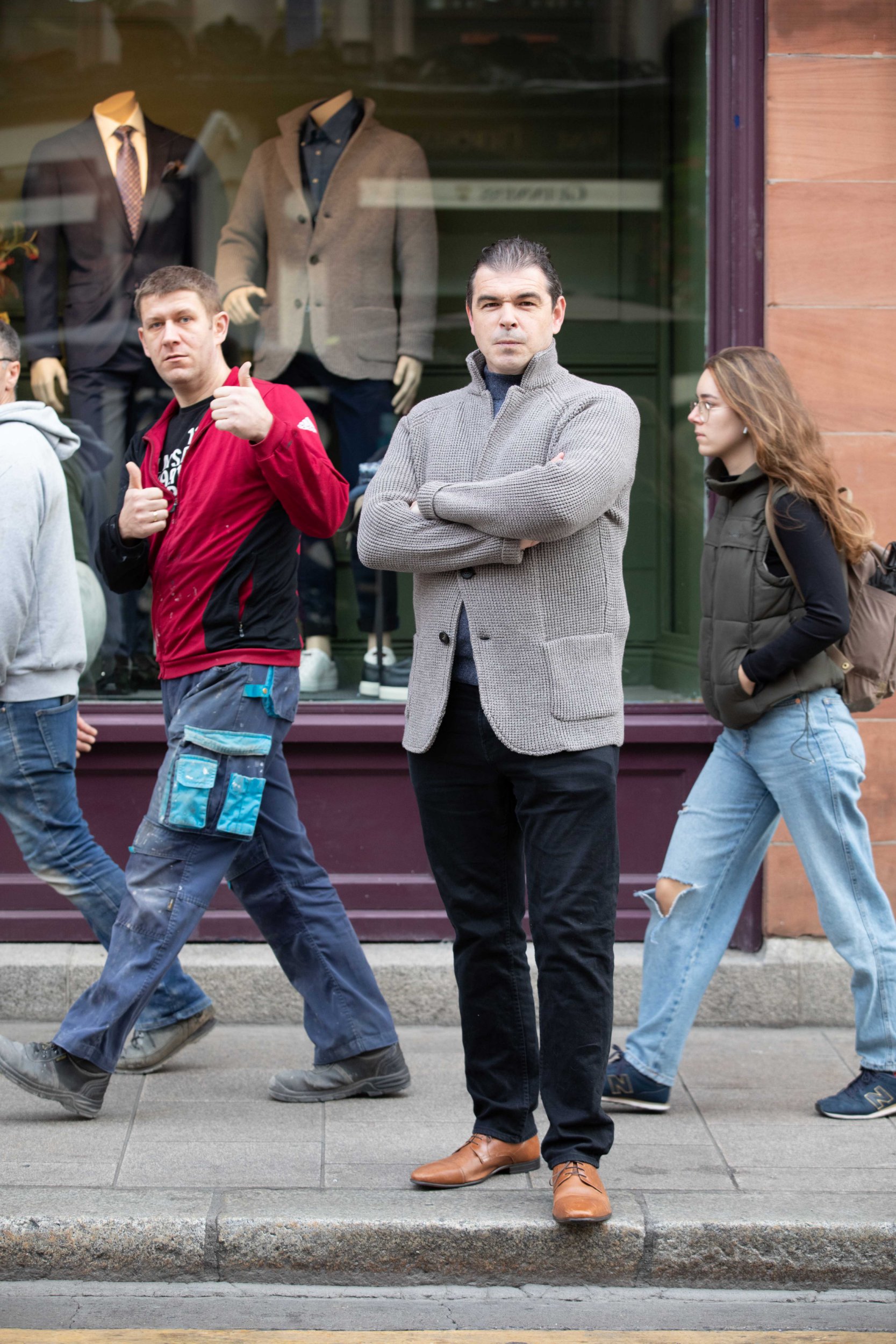 SUIT sales are in decline all over the world, but when one of Hollywood’s sexiest men came to film in Ireland he kicked off a new trend.

The swacket – which I had never heard of before – is a cross between a sweater and a jacket costing as much as €1,199 in his shops.

It is much in-demand as men opt for more casual workwear while also retaining key elements of the  formal two piece after 18 months at home.

Dempsey bought two swackets from Louis’ Dublin store when filming Disney’s Disenchanted during the summer, and once fellas heard that they were banging down Copeland’s door.

As the nearest thing the Irish Sun has to a McDreamy – and can I be very clear here, I’m not claiming to be quite in the Grey’s Anatomy star’s league – I was asked to go out and try to pull off his look.

We asked Louis prior to arrival at his shop on Dublin’s Capel Street this week whether Irish men were having much joy replicating Dempsey’s swagger.

“Not really, no”, he said, “but he’s unique in fairness,  a good looking bloke.”

So it was a big ask.

Dempsey is 55, and looks about 45, which is very, very close indeed to my age.

We both have dark hair, thereby making me ideal for the job.

But while the Transformers and Bridget Jones’s Baby actor might love the look of Copeland’s latest phenomenon, after giving it my best shot I’m just not sure it’s for me.

Very few heads turned as I paraded up and down the streets of Dublin’s north inner city, showing off the finest Italian wool that would cost someone at least €700 to buy.

Then again, perhaps that’s not the swacket’s fault?

Just to be absolutely sure I gave everyone ample opportunity to see me do a Dempsey, I walked up and down the street four times until I had to stop and have a rest.

Louis told us: “The swacket is a sweater jacket, a knitted jacket you can use as casual wear or put a shirt and tie under it and get away with it.

“They’re very popular, a lovely garment and not cheap now.

“We’ve stocked them since last year and they were very hot last autumn. Then McDreamy was photographed in a navy swacket he got from us and people want them now.”

OVER €1K FOR A SWACKET

It’s wonderfully cosy and you can see the kind of appeal it would have for many people, but it’s a lot of cash to spend on clothes just to lounge around on a couch, I mean or even work at home.

More power to anyone who wants to fork out €700 for one.

We love the innovation of trying something new for workers after 18 months working remotely and am not surprised that Louis has managed to pull it off again.

I prefer the elegance of the sports jacket when I venture outside my remote working hub (my gaff) and I can’t see that changing just yet.

Swackets range from €639 to €1,199 in the Dublin shops, which puts them slightly out of reach for most of us looking for a new suit after almost two years in sweatpants.

I may revisit it in the future of course, but can already see the women in our lives having something to say about spending so much cash on a sweater-jacket when we could be spending it on low risk, low yield, long term investment bonds instead.

The global downturn in suit sales has been going on for quite a while, it’s not just a pandemic problem.

But  Copeland says suits are flying out the door as weddings get ramped up again, shrugged off the decline in worldwide sales and insisted: “You wouldn’t see James Bond going out in a tracksuit.”

He said: “When he goes out for dinner he wears the tux, or when going to work and people take him seriously.

He’s right, in fact he probably wouldn’t even go out in a swacket come to think of it.

After the best part of two years in lockdown, however, Louis told us business is booming again.

He said: “During lockdown people weren’t wearing suits, half of them in pyjamas the other half in tops with tracksuit bottoms. They haven’t worn suits in 18 months, but now things are opening up.

“People were working from home, but now people want to get back and you put a suit on you, it’s like a suit of armour.

“The shoulders go back, the head goes up, you feel better. Going back to the office, there’s one-upmanship, he’s dressed in a suit and the other fella is in casual wear.

“Who do you take seriously when you’re trying to do business? You wouldn’t take the lad in a pair of jeans serious.”

Unfortunately for tailors, businesses are increasingly taking the casual fella seriously and sales have taken a sharp dip as a result.

US suit sales were  down eight per cent in the four years to 2019, and last year high heels purchases plummeted by almost half.

In the UK, Marks & Spencer cut back its formal range even before Covid hit following a slump in sales.

Fashion giant Hugo Boss has been forced to pivot towards “performance wear” while global leisure wear  gets set to explode into a €500billion a year market.

Copeland’s formal wear business was decimated during the pandemic – from 50 per cent of sales to just 20 per cent – but it’s getting back to business as normal now.

Much of the upturn in Louis’ business is from weddings, which he said are now happening most days of the week as people catch up following two weeks in the wilderness.

Copeland previously credited Conor McGregor with helping to revive suit sales in Ireland, but he hasn’t seen the former UFC man in many years after dressing him in the early days.

And he says youngsters are still suiting up in a nod to the brawler.

He said: “McGregor, he’s doing his own line so haven’t seen him. We kind of dressed him at the start, he did a lot for the suit market in the country.

“Nine times out of ten he’s in a well-tailored suit. All ages are wearing them as a result, a lot getting them custom made.”

While I’m delighted to be a poor man’s McDreamy for a morning, I draw the line at McGregor.