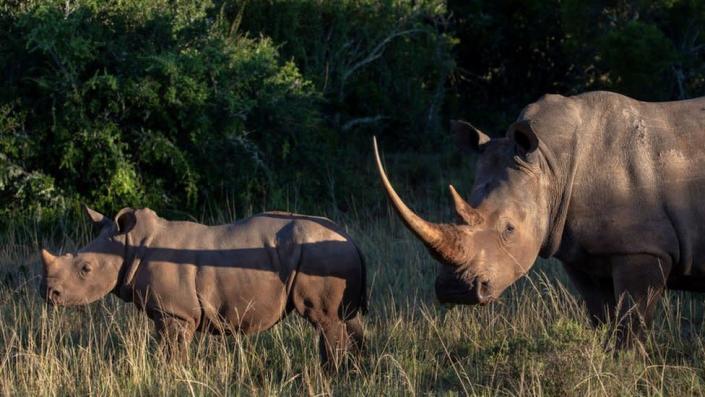 Kenyan police have arrested a man suspected of links to a transnational wildlife and drug trafficking syndicate who was indicted in a US court.

Abdi Hussein Ahmed, alias Abu Khadi, was detained on Tuesday in the central county of Meru after a tip-off from the public, police say.

The US had offered a $1m (£0.8m) reward for information leading to his arrest.

In 2019, Mr Ahmed was charged in a New York court with conspiracy to traffic rhinoceros horn and ivory.

He was also charged with conspiracy to traffic at least one kilo of heroin.

Three other men were indicted along with him: Moazu Kromah, aka Ayoub; Amara Cherif, aka Bamba Issiaka; and Mansur Mohamed Surur, aka Mansour.

Over some seven years, they had reportedly conspired to smuggle about 190 kilos of horn and 10 tonnes of ivory with a value of $7m from Kenya, Uganda, the Democratic Republic of Congo, Guinea, Mozambique, Senegal and Tanzania.

This represented the illegal poaching of more than 35 rhinos and more than 100 elephants.

The horn and ivory were allegedly destined for buyers in the US and South-East Asia.

On 26 May, US and Kenyan officials made a joint public appeal for information that could lead to the arrest of Mr Ahmed. The US offered rewards of $1m each for Mr Ahmed and another trafficking suspect, Badru Abdul Aziz Saleh.

The two arrests pointed “to the longstanding partnership that the directorate [had] had with the United States in combating transnational organised crimes”, Kenya’s Directorate of Criminal Investigations said.

Demand for rhino horn has been blamed for driving poaching and threatening the survival of the species.

It is claimed as an aphrodisiac in traditional Chinese medicine – which has sustained demand despite official attempts to prevent the trade.

Ivory is still a status symbol in some countries, according to the wildlife charity WWF. A study last year suggested that severe ivory poaching in parts of Mozambique had led to the evolution of tuskless elephants there.

As Iranian women are arrested for protesting against hijabs, some make ‘forced confessions,’ activist says