French Catholic Church says will use own assets to…

Andreessen Horowitz triples down on blockchain startups with… 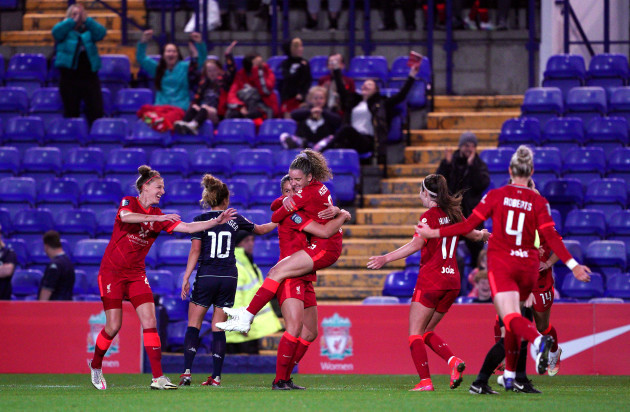 LEANNE KIERNAN CONTINUED her stunning goal-scoring form as she helped Liverpool to a big result in the Continental Cup — or FA Women’s League Cup — tonight, though it came at an injury cost.

The Irish international was sprung from the bench shortly after the hour-mark for the Reds, and with one of her first involvements, levelled matters against Aston Villa.

Kiernan, 22, made her impact felt immediately with an impressive individual goal, which comes as her fourth in three games.

But her cameo was a brief one; the Cavan woman limping off in the 78th minute. Her Championship side went on to earn two big points against top-flight Women’s Super League [WSL] opposition in Villa; one for finishing level after normal time, and a bonus one after Ashley Hodson’s penalty won the shootout 5-4.

Three goals in two league games ?
Scoring within a minute of coming on as a sub in the #ContiCup ⚡️@kiernan_leanne is on FIRE! ?#FAWC @LiverpoolFCW pic.twitter.com/PxcWOtFq15

Niamh Fahey and Megan Campbell are the other Irish players at Liverpool alongside Kiernan, while Ruesha Littlejohn is on the books at Villa, but none of the three featured.

There was another Irishwoman on target in the competition tonight in Megan Connolly.

The Cork star scored the winner for Brighton & Hove Albion, and inflicted defeat on a hefty cohort of international team-mates at Birmingham City.

Connolly’s 44th-minute goal was to be the matchwinner, earning all three points for the Seagulls.

No fewer than seven Irish players were involved for Birmingham, meanwhile; goalkeeper Marie Hourihan, captain Louise Quinn, her namesake and new cap Lucy, Harriet Scott and Jamie Finn were all in from the start, with Eleanor Ryan Doyle and Emily Whelan both introduced in the second half.

Elsewhere, Ireland’s US-born goalkeeper Courtney Brosnan made her Everton debut after her summer switch from West Ham, but it was a difficult night as the Toffees fell to a 5-1 defeat to Manchester City.

Her shot-stopping counterpart, Grace Moloney, kept another clean sheet elsewhere, helping Reading to a 1-0 win over Bristol City, while Rianna Jarrett got 75 minutes under her belt in her London City Lionesses’ side’s narrow loss to West Ham.

Focus then switches to the international scene next week; Vera Pauw’s Ireland opening their 2023 World Cup qualifying campaign against Sweden at Tallaght Stadium on Thursday night, before travelling to Finland as they face the top-two seeds in Group A.