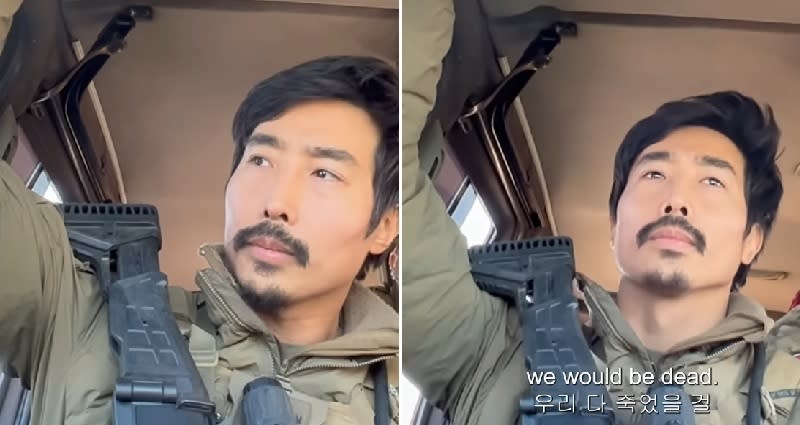 YouTuber-turned-Ukrainian soldier Ken Rhee recently shared footage of him and other members of the Ukrainian Foreign Legion in a tense moment inside a vehicle while trying to evade Russian forces.

The Korean ex-Navy SEAL lieutenant, who went to Ukraine in March to fight against the Russian invasion, uploaded a video to his YouTube channel Friday showing him and his team trying to evacuate a wounded soldier after a reconnaissance mission.

The footage, taken some time in April, ends with the soldiers abandoning their vehicle due to a flat tire.

The video also includes a short interview conducted in Ukraine by musician Solnamoo Song, in which Rhee explains what goes on in such operations.

Rhee, who was promoted to a leadership position in the Ukrainian military last month, says he goes on missions with his deputy team leader, the leader of another team and a former U.S. Ranger.

“These are not a type of offensive operation, but we just go out to scout specific areas,” Rhee shares.

More from NextShark: Overheard conversation between a girl and her father leads to her shabu shabu birthday wish coming true

Rhee also explains that during their mission in April, their position in a hangar got bombarded by an artillery strike shortly after they arrived. This bore a hole through their vehicle’s roof and into the ground right next to them.

The shockwave threw Rhee out of the hangar, but the muddy ground kept the blast contained, allowing him and his team to survive.

“You know, the ground turns into mud when it rains,” Rhee tells Song. “So, the blast must’ve been kept in the ground. That was how we survived, I suppose.”

Rhee returned to South Korea on May 27 due to ACL injuries. During the interview, he says that he expects his recovery time to last for months.

On June 15, he was sent to prosecution without detainment by the International Crime Investigation Unit of the Seoul Metropolitan Police Agency for traveling to Ukraine during a travel ban.

Rhee now faces up to a year in prison or a fine of up to 10 million won (approximately $7,730) for violating the local passport law.

NATO invites Finland, Sweden to join and eyes ‘direct threat’ from Putin am…