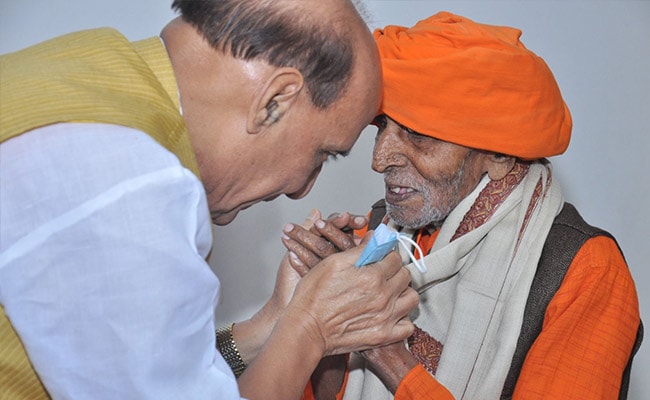 Defence Minister Rajnath Singh met one of the oldest BJP workers, Bhulai Bhai – who was witness to the transformation of Jana Sangha into Bharatiya Janata Party – at the Uttar Pradesh Bhavan in Delhi today. Visuals showed Mr Singh hugging and presenting the 106-year-old with a shawl.

“I feel young after meeting him. It’s like Lord Krishna came to meet Sudama. I received Rajnath ji’s love and blessings. We discussed various past things and I invited him to my residence,” said Bhulai Bhai after the meeting.

Bhulai Bhai had joined erstwhile Jana Sangha on Vijaydashmi in 1952 and worked with the founders of BJP, Deen Dayal Upadhyay and Syama Prasad Mookerjee. Coincidentally, his meeting with Rajnath Singh was also on the eve of Dussehra.

Bhulai Bhai, who had been a two-time MLA from Jana Sangha in the years 1974 and 1977, also said that BJP will retain Uttar Pradesh in the upcoming assembly polls.

“Very good meeting,” was how Mr Singh described his rendezvous with the BJP worker.

“I came to meet Bhulai Bhai. Probably, he is the oldest among all the BJP workers of the time of Jana Sangh in the country. In 1977, when I was an MLA, he was also an MLA,” he said.

Prime Minister Narendra Modi had called the senior leader during the second Covid lockdown to inquire about his health. The PM had them made an appeal to every citizen of the country to take care of the elderly in the family.

Bhulai Bhai had worked with the founders of BJP, Deen Dayal Upadhyay and Syama Prasad Mookerjee.

With Inputs From ANI