Look past late fumble. Josh McDaniels messed it up for Raiders in stunning loss to Cardinals 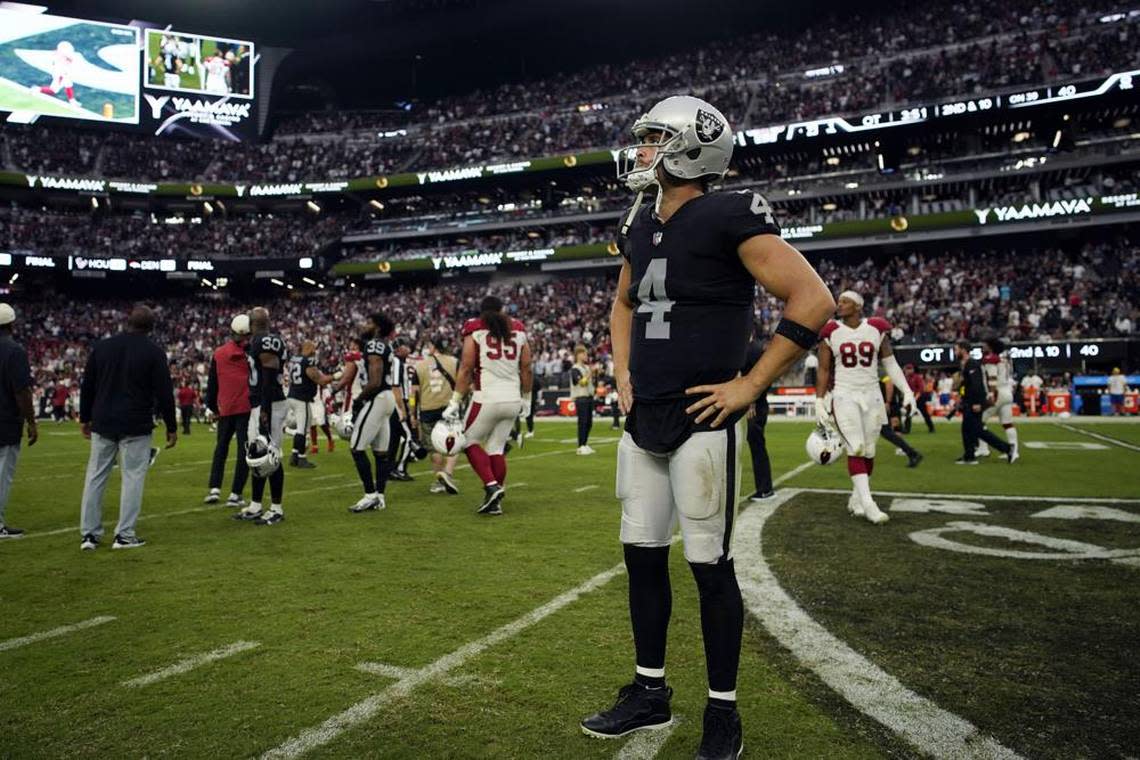 No way around it for the Raiders, this was a bad loss.

Sunday saw an epic collapse by the home team, which led 20-0 in the third quarter.

You would have thought that was game over, right? Not so fast.

A Hunter Renfrow fumble in overtime sealed the Raiders’ fate as Byron Murphy scooped up the ball and ran to the end zone to give the Cardinals a 29-23 victory at Allegiant Stadium.

“(Arizona) did a few things differently in the second half, I think,” Raiders coach Josh McDaniels said. “At the end of the day, I think you have to learn how to handle success like we had in the first half, and/or failure if that’s you on the other end of the spectrum, if you’re behind. And that starts with me, I have to do a better job of getting our team able to handle a lead just as much as we were able to try to fight back last week from a deficit.”

But this one shouldn’t be pinned on Renfrow. Or on Derek Carr. Or the defense.

Look instead at McDaniels, who decided to have Carr throw the ball on three pass plays just after the start of the fourth quarter, instead of turning to a running back in Josh Jacobs who was fairly productive on the ground for much of the game.

Arizona made the Raiders pay, inching back into the game with a touchdown to cut the lead to 23-15. Kyler Murray scored a two-point conversion on a play that seemed to take forever as the Arizona quarterback scrambled away from Raiders defenders.

Or how about when the Raiders got the ball back in overtime and needed just a field goal to win the game?

The Raiders again decided to throw the ball, twice to Renfrow, who fumbled twice. One was recovered by teammate Foster Moreau before the second was fumbled away to the Cardinals two plays later. Game over.

In between those two pass plays, Carr threw down the middle, incomplete, to Davante Adams.

The Raiders were already in Cardinals territory and needed just a couple of yards to make it comfortable for kicker Daniel Carlson, who’s been clutch on his field goal attempts since joining the Raiders in 2018.

McDaniels elected to have Carr throw instead of giving Jacobs a chance to pick up yards. The coach should be blamed for this loss. This turned out to be the largest blown lead in Raiders history.

It will be difficult, because the next few opponents include the Tennessee Titans, Denver Broncos and the Kansas City Chiefs.

On the verge of being 1-1, it now could easily look dismal for the Raiders unless McDaniels makes better calls to give his team a better chance at winning the game.

“We’re learning, and we have to learn quickly,” McDaniels said. “We have to start producing some victories here along the way.”

For that to happen, McDaniels needs to be smarter and continue to run plays that are working and give his team a better chance.

Deion in the desert would be one Devil of a time

(Reuters) – Swamped by panic-stricken requests for help to avoid being drafted, Russian lawyers say they are working flat out...

After injuries to both Cordarrelle Patterson and Javonte Williams, Yahoo Sports' Matt Harmon and Andy Behrens offer up a few...