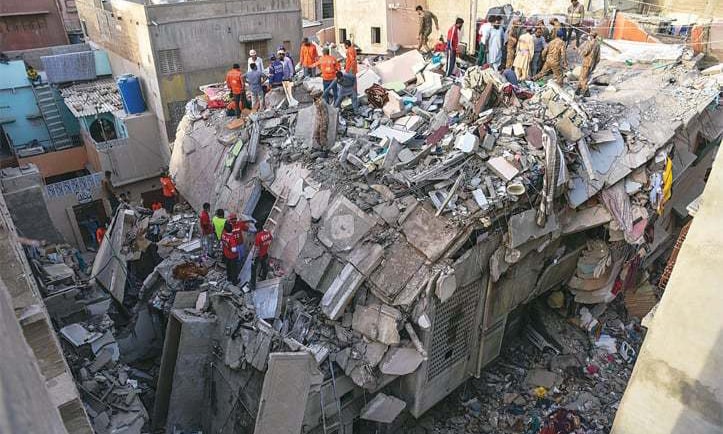 Another month in Karachi another building has been collapsed this time in Lyari one of the busiest areas of Karachi. On Sunday night June 7, news came from the area that a five-story building in the Karli area of Lyari has been collapsed, the residents were stuck under the debris.

According to the residents of the building “Since the morning, the building was shaking, we were scared, we left the buildings along with 50 to 70 people, then later we came in the evening to collect our expensive items such as money, gold, clothes so we can move ourself to our relative house”

When a bunch of people more than 30 to 50 went inside the building suddenly the building collapsed and the residents were stuck under the debris and they were all shouting and requesting the public to save them. The crowd was in big numbers they were all panicked and ran away from the spot.

At the time of writing, this news on June 10, 2020, a total of 22 dead bodies was recovered from the debris. Karachi commissioner decided to lodge cases across the city against illegal constructions. According to the Sindh Building Control Authority (SBCA), we have sent a notice to the building residents on 17 March 2020, to leave the building as soon as possible because the building is not in good condition as it was 25 to 30 years old.

According to one of the female residents told ‘EMEA TRIBUNE‘ that we asked the builder (Building Owner) to move us to a safe place but he refused, the builder said that you don’t have to worry nothing will happen and a day later the building was collapsed. Sindh Minister for Information and Local Government Syed Nasir Hussain Shah said that the government will not leave anyone who plays with the lives of citizens, we will take action and I am requesting Naseem ul Ghani Chief of Sindh Building Control Authority to identify illegal structures in the city and lodge FIRs against builders.

How Many Building Collapse in Karachi?

This Lyari building is the 3rd building that collapsed in the past 6 months in Karachi but there are many which will be collapse this year or next year due to bad construction and maintenance, says SBCA in the report.

On 5 March 2020, a building in Gulbahar Karachi was also collapsed in which 27 people died.

In December a building in Ranchor Line was also collapsed in and two people died.