US troops leave Bagram Air Base in Afghanistan, signaling…

Forced Conversion Can’t Be Testament Of Trust For Any…

US woman pays price for non-returned Sabrina the Teenage… 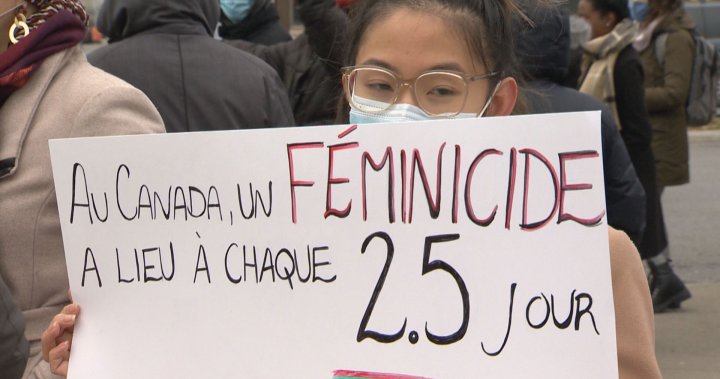 Thursday, Nov. 25 is the International Day for the Elimination of Violence Against Women.

To mark the occasion, and to draw attention to what they say is a growing concern, a group of women gathered outside the Henri Bourassa metro station in Montreal’s Ahuntsic district.

They wanted to get people to speak up.

“To talk about the issues that are not talked about,” said Sara Eldabaa, one of the demonstrators.  “Issues that are pushed under the rug because they are seen as taboo.”

She and the others said the problem is getting worse, not better, despite millions of dollars promised for resources.

“All the women’s shelters are telling it,” said Mélanie Ederer, Quebec Women’s Federation president.  “Women are even more stuck at home with less access to information, to people, to resources.”

This year has been particularly alarming, she said.

At least 17 women in the province have been murdered in intimate partner violence.

Montreal police are refusing to confirm that the case of a woman whose body was found with a man in an apartment on Fairmont Avenue in early November was a femicide. That would push the femicide count to 18.

Still, protesters point to the pandemic as one reason for the increase in domestic aggression towards women this year, saying people are stressed.

In a statement, Canadian Prime Minister Justin Trudeau said “since the outbreak of covid-19, there have been escalated rates of gender-based violence around the world. The social and economic impact of the public health emergency has resulted in a shadow pandemic.”

The women who gathered outside Henri Bourassa noted that some women are more at risk.

“Racialized people, marginalized people, people living in the periphery of the centre of the city are more vulnerable,” Fatima Terhini, a protester, told Global News.

The first step to fighting the problem, said Eldabaa, is to acknowledge it more forcefully.

“It’s also taboo because it’s very personal to talk about your partner either hitting you physically or refusing to give you money or psychologically manipulating you,” she told Global News.

The group plans to push the conversation for 12 days until the anniversary of the École Polytechnique massacre, Dec. 6.