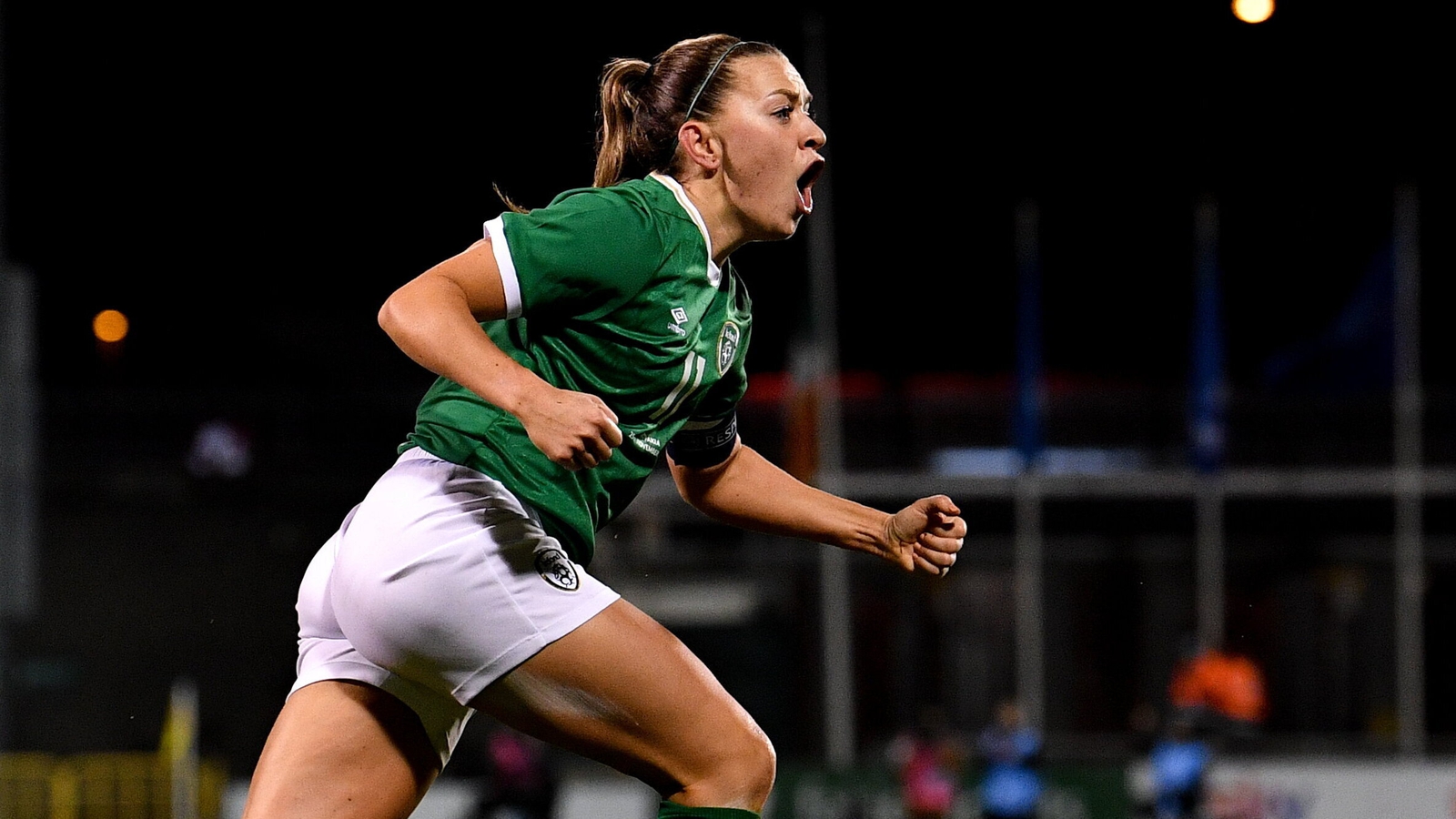 The Republic of Ireland battled back for a hard-fought 1-1 draw in their World Cup qualifier against Slovakia at Tallaght Stadium.

The first half lacked quality and offered little from either side, but the contest came alive inside two minutes of the second period as Martina Surnovska put the visitors in front.

Ireland finally got going midway through the second half and grabbed a deserved equaliser through captain Katie McCabe, who smashed home in the 65th minute.

Ireland pushed for a winner in the latter stages but could not get the vital goal, as a share of the spoils was probably the right result based on the entire encounter, with Slovakia playing their way back into the equation in the race for second spot in Group A.

The visitors offered little attack or ingenuity in the opening exchanges and their only significant contribution was a yellow card picked up by Andrea Horvathova for a blatant tug of McCabe’s shirt.

Ireland probed continuously and while two crosses flew across the face of the goal inside the opening ten minutes, there was no one in the area to connect.

Slovakia finally got forward in the 11th minute as Maria Mikolajova cut in from the right, but her well-hit snap-shot was easily saved by Courtney Brosnan.

And the away side grew into the game, while not causing Ireland any real issues, but to their credit, they were more than capable of holding a high line, allowing Vera Pauw’s side little time in the final third aside from one hopeful ball over the top, which Heather Payne almost capitalised on.

It took Ireland 32 minutes to test Maria Korenciova, and the AC Milan stopper did well to pluck Lucy Quinn’s flicked header out of the air as it drifted towards the far top corner.

Slovakia went on the attack four minutes later as their impressive captain, Dominika Skorvankova, got to the by-line on the right and drilled a shot across goal, but again Brosnan was assured with the save.

Ireland then enjoyed their best passage of play with O’Gorman and Lucy Quinn threatening in the box and from the resulting corner, namesake Louise almost opened the scoring with a trademark back-post header, but the keeper got down low to her right to help the ball around the post.

A speculative Payne off-target effort from distance was the best Ireland could muster as the half came to a close with the sides scoreless at the break.

The visitors went straight on the attack with the wind behind their backs in the second half, and they broke the deadlock with their first foray forward.

Ľudmila Matavkova raced clear down the right touchline and whipped a dangerous ball across the face of the goal where Surnovska arrived right on cue to help the ball home at the back post.

The goal spurred Ireland into action, yet for all their pressure piling forward, the quality of the final ball remained an issue.

But then in the 58th minute, Ireland turned on the style as McCabe danced her way down the left before feeding Payne inside, who helped it on to O’Sullivan. The play was halted on the edge of the box, but Megan Connolly arrived to smash a wonderful effort goalwards, and the save matched the shot as the keeper went full stretch to touch it around her left post.

Ireland were now in the ascendancy and then a moment of quality from McCabe brought them right back into the game in the 65th minute.

Slovakia struggled to work the ball out of the corner and Ireland’s pressure saw the play worked along the edge of the box where O’Sullivan played McCabe into space.

The angle was narrowing as the captain was pushed left of the goal but an exquisite left-footed effort sent the ball flying back across the face and the diving keeper had no chance as the ball flew into the bottom corner of the net.

Slovakia worked their way back into the game and worked another effort on target in the 73rd minute, however, Alexandra Biroova’s header was well saved.

But then Brosnan nearly handed Slovakia a gift as her poor touch in the box handed Hmirova a point-blank shot at goal. The keeper did enough to block the effort but it was Louise Quinn who saved her blushes with a goalline clearance as substitute Laura Zemberyova looked to turn the ball into an empty net.

Hmirova then timed a run into the box and tried to help the ball on target in the 80th minute, but she could not trouble the keeper.

Into the last ten minutes and Ireland pushed for a winner, and they had a great chance to secure all three points in the 85th minute as substitute Ruesha Littlejohn delivered an excellent ball across the face of the goal.

Louise Quinn threw herself at the ball at the back post but was unable to connect.

The clock hit 90 as five minutes were added, however, the winning goal did not arrive and Ireland had to settle for a point, and in truth that was probably all they deserved from a tough encounter with a well-drilled Slovakian outfit.