Lamar Jackson is facing unfair pushback from everywhere, but he isn't doing himself favors with one glaring move

Rooney Rule is a sham, and NFL owners know it 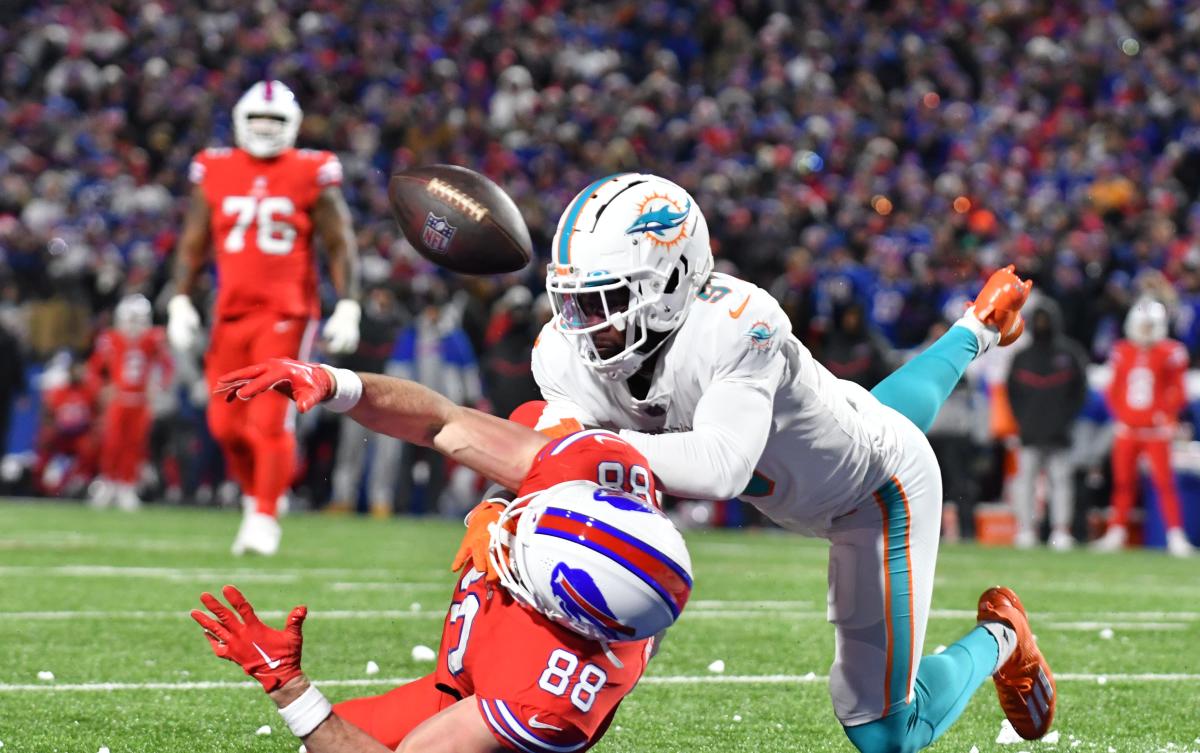 It’s going to be an uphill climb for the Miami Dolphins to win their wild-card playoff matchup against the Buffalo Bills.

Quarterback Tua Tagovailoa was ruled out as the effects from a concussion suffered Dec. 25 have left him unable to practice. Backup QB Teddy Bridgewater is still recovering from a broken finger. That leaves rookie Skylar Thompson as the likely starting QB in the Dolphins’ first postseason game since the 2016 season. And that’s not the only injury Miami (9-8) is dealing with: Pro Bowl tackle Terron Armstead has missed the past two games, guard Liam Eichenberg is battling a hand injury, and running back Raheem Mostert has a broken thumb.

The Bills, meanwhile, are champions of the AFC East with a 13-3 record. They blew out the New England Patriots last week with Damar Hamlin watching from the hospital after his collapse on the field the week before. Quarterback Josh Allen has put up a strong MVP case leading a high-flying offense with Stefon Diggs, Gabe Davis and company.

The teams split the regular-season series, with both teams winning at their home stadiums. The Bills had to rally late to win Dec. 17, but can Miami keep it close with Thompson throwing to Tyreek Hill and Jaylen Waddle?

5 things to know:Skylar Thompson could be Miami Dolphins’ starting quarterback in NFL playoffs

Thompson does enough vs. Jets:Third-string QB Skylar Thompson on leading Dolphins to playoffs: ‘It’s been a crazy journey for me’

Tua’s recovery:Tua Tagovailoa is working up a sweat again. What does that mean in 5-step recovery program?

Who will advance to the AFC divisional playoffs? NFL reporters and analysts weigh in with their picks:

The crazy thing is that I think the Dolphins are actually going to be able to run the ball, but that being said, I only have one rule when it comes to picking playoff games and that rule is that if I don’t know who your starting quarterback is going to be, then I can’t pick your team to win. No matter who the Dolphins throw out there on Sunday, that QB won’t be better than Josh Allen.

Josh Allen vs. Skylar Thompson. Sometimes, you don’t need to say anything more.

The Dolphins will not have QB Tua Tagovailoa (concussion) again, which means they will try to win in Buffalo with rookie Skylar Thompson if Teddy Bridgewater is unable to go, as well. It probably doesn’t matter against the Bills, though. They have not lost since a Nov. 13 defeat to the Vikings — their only home loss this season. Curiously, the Bills lost in Miami early this season and beat them by only three points in Buffalo last month. Don’t see that happening again.

The Dolphins limped to the finish line. If Teddy Bridgewater was starting this game, much less Tua Tagovailoa, I’d give the Dolphins a chance to attack Buffalo’s weaknesses in the secondary. If Skylar Thompson starts this game, take a touchdown away from Miami. The familiarity here could also help Miami, a division matchup in which it already played the Bills even twice.

The Dolphins have enough pass rushers up front (Christian Wilkins, Bradley Chubb, Jaelan Phillips) to bother Josh Allen, although consider it a bad sign he was back to World’s Destroyer Mode last week against the Patriots. Keep an eye on the injury report here beyond quarterback. Left tackle Terron Armstead‘s status remains uncertain, and Xavien Howard didn’t look 100 percent last week after missing Week 17 with a knee injury.

The Bills are heavy favorites, and that is due in large because of Miami’s quarterback situation. … Skylar Thompson has a 57.1% completion percentage in limited action. That is asking a lot on the road against Buffalo, which was 7-1 at home in the regular season. Josh Allen averaged 352 passing yards with seven TDs and no interceptions against the Dolphins in two regular-season meetings.

If Tua Tagovailoa were healthy, this would be an intriguing first-round matchup. Without Tua, it’s hard to see the Dolphins even keeping it close against a Bills team that is strong in all phases of the game.

The quarterback situation is in flux for Miami, but I don’t think it matters who plays. The Dolphins played well in losing to the Bills late in the season, but that won’t be the case here. Josh Allen and the offense will light up the Dolphins defense, while the Bills will limit the Miami big plays. The Bills will be moving on.

The Bills are simply on a whole different stratosphere than the Dolphins, and Thompson could be one of the worst quarterbacks to start a playoff game in quite some time. Even before Tagovailoa’s second (or third?) concussion against Green Bay, Mike McDaniel’s squad was starting to come unglued, and the late-season injuries aren’t helping. Buffalo is riding a seven-game winning streak and making huge plays on offense, defense, and special teams. To top it all off, Sean McDermott’s team has the extra motivation of winning for Damar Hamlin. You might want to buy a point to keep the spread under double-digits, but Buffalo by two-plus TDs almost seems like an easy pick.

Mike Vick to Lamar Jackson: “Put a brace on it, let’s go”

SALT LAKE CITY (AP) — Utah lawmakers wasted no time this week before returning to an issue that has become...

The Saudi Minister of Finance: We used to offer grants without conditions… and the method of aid has changed

The Saudi Minister of Finance, Muhammad Al-Jadaan, said that the Kingdom is changing the way it provides aid to its...

Lamar Jackson is facing unfair pushback from everywhere, but he isn’t doing himself favors with one glaring move

A complicating factor in all of this is that Jackson doesn't have an agent. He really, really should have one.

What ails the 12th-place Phoenix Suns as a prospective playoff team has been diagnosed on the injury report daily. What...