How much money do I need to live entirely off dividends? Here's how to figure out the lowest amount you need to make it work

Maker of $555,000 Flying Motorbikes to Begin Trading in US

J.P. Morgan Pounds the Table on These 2 Reliable Dividend Stocks

‘Things were way tougher’: Charlie Munger has a blunt message for whiners worried about 'hardship.' Here are the stocks that keep Warren Buffett's right-hand man happy in tough times

BlackRock — the world’s largest asset manager — says central banks are 'deliberately' causing recessions and warns of a downturn unlike any other. 3 shockproof assets for your protection 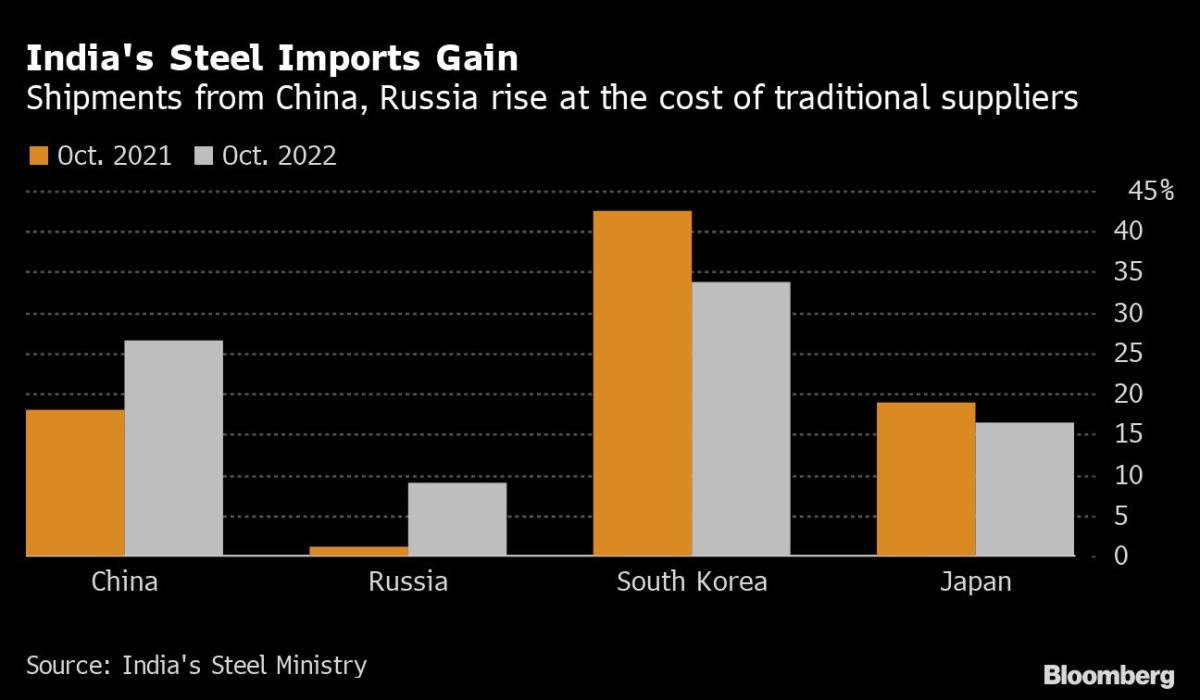 (Bloomberg) — With China’s massive construction sector still in a funk and the US and Europe likely heading into recessions, India has emerged as a savior for flagging global steel demand.

Poised to overtake China as the world’s most populous country next year, India is in the midst of a building boom. Prime Minister Narendra Modi is seeking to modernize roads, rail networks and ports in attempt to vie with China as a manufacturing hub.

That’s set to translate into a 6.7% jump in steel demand to around 120 million tons in 2023, according to the World Steel Association, the highest growth among major economies. India, which also saw a similar expansion this year, overtook the US to become the world’s No. 2 steel consumer after China a couple of years ago.

“The nation-building phase of any economy requires a lot of steel and commodities,” said Jayant Acharya, deputy managing director at JSW Steel Ltd., the nation’s biggest producer. India is going through that phase in this decade, and it could boost the country’s steel consumption to over 200 million tons by 2030, he said.

The buoyant outlook has set off a flurry of activity. ArcelorMittal Nippon Steel India Ltd., a joint venture between India’s Mittal family and the Japanese producer, has plans to more than triple capacity to 30 million tons in the coming decade. South Korean steelmaker Posco Holdings Inc. and Indian tycoon Gautam Adani, Asia’s richest person, are also exploring setting up mills in the country.

India produces the vast majority of the steel it uses, but it’s also being forced to import more to meet the surge in demand. Inward shipments rose 15% in April through October from a year earlier to 3.1 million tons, according to government figures.

Local producers are becoming worried about the flood of cheap imports as demand dries up in traditional steel producers. China accounted for more than a quarter of imports in October, while some Russian steel is also reaching India, the government data show.

The quality of some of the steel coming in is “sub-standard,” said A.K. Hazra, deputy secretary general at the Indian Steel Association, which has requested authorities look into the matter. “We are just asking that imports should be at competitive and international prices and the quality should adhere to Indian standards,” he said.

Despite the strong growth, India is still well behind its rival Asian powerhouse in terms of total steel consumption. Demand for next year will be less than a seventh of China’s 914 million tons, according to the World Steel Association data.

How fast India can narrow the gap will depend on the success of PM Modi’s construction roll-out, with the Ministry of Finance estimating $1.4 trillion of funding will be needed for the National Infrastructure Pipeline through 2025.

“Over the long term, it would depend on the recovery of the property sector on the one hand, and the government’s policy of an infrastructure-led economic growth model in China.”

'Trump doesn’t just cheat at golf,' Rick Reilly wrote in a tell-all book. 'He throws it, boots it, and moves...

As violence mounts between Israelis and Palestinians, UN High Commissioner for Human Rights Volker Türk on Friday called for an...

How to get the most from a wood burner: Owners share their best tips

They are at the centre of more than 1.5million homes, warming the houses and hearts of Britons for months of...

JERUSALEM (AP) — The Palestinian health ministry said Israeli forces shot and killed a Palestinian on Friday at a checkpoint...