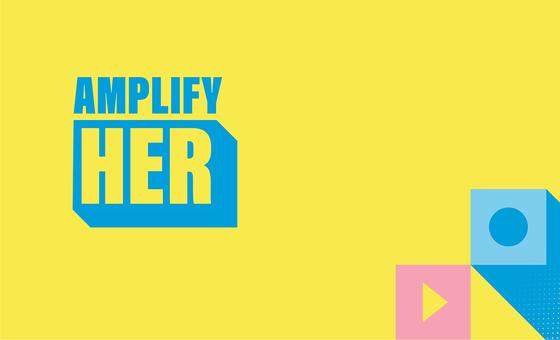 amplifyHER is a UN News production, supported by SoundCloud. The first episode is released Thursday, 24 November, on all major podcast platforms. Subsequent episodes will be released on a weekly basis.

Teenage superstar Milli became the first Thai artist to perform solo at the world-famous Coachella Music festival, winning over a brand-new audience. She has been making waves in her country ever since the release of her debut single Phak Kon in 2020, thanks to witty lyrics in English, Thai, and several regional dialects.

A successful artist from a very young age, MC Yallah had to fight her way back into the music industry, after taking time out to raise her family. A turning point came when she signed with Nyege Nyege, a record company that supports artists outside the mainstream. She took her music into a new, more experimental direction, and is now drawing big crowds across Europe.

Carmen, a woman songwriter from Venezuela, is exploding on the scene as an artist and songwriter. She makes music in both Spanish and English, and is a fiercely independent voice. Despite having lived in Mexico, the US and Spain, she feels a strong attachment to her Venezuelan roots. Several of her videos have over one million views on YouTube.

Emel Mathlouthi was named the ‘voice of the Tunisian revolution, after a video of her performing a version of the song ‘My Word is Free’, during a Tunisian street protest, went viral online during the Arab Spring.

Faouzia, a young singer with a huge voice, was born in Morocco and raised in Canada. She started making a name for herself when she was just 15, posting songs to YouTube and winning Canadian music prizes and awards. Soon after, when she was still in high school, influential EDM producer David Guetta invited her to feature on his song “Battle”.

Sarah Crouch is part of DejaVilla, a duo she formed with Brooklyn-based producer and songwriter David Marston, who provides the dance rhythms to her sensual vocals. Although her parents were both musicians, they encouraged her to study in the hospitality industry, in the knowledge that making a living in the music industry, particularly in Jamaica, can be hard. Cooking is still one of her passions.

Adomaa’s musical career began when she started singing covers of songs she liked, and recording them on her phone. Today she is seen as a leading light of afro-jazz and alternative music in her home country.

Alena Murang is working to preserve her Dayak Kelabit indigenous roots, from the rainforests and highlands of the island of Borneo. She was the first woman to professionally perform and teach the Sape, a lute instrument of the highland tribes of the island traditionally reserved for male healers. She sings in the endangered languages of Kelabit and Kenyah.

LIA LIA is the brainchild of half-Chinese, half-German artist Lia Wang. Her early releases drew global attention, and led to a personal invite from Doja Cat to support her on a string of German shows. She has over 245,000 subscribers on YouTube.

As a teenager, Lyn Lapid started posting cover videos on Youtube. In late 2019, she launched her Tik Tok page, quickly building an audience of five million followers, who were captivated by her voice. A snippet of her first original song, Producer Man, become the most viewed unreleased demo on a Tik Tok video in 2020.