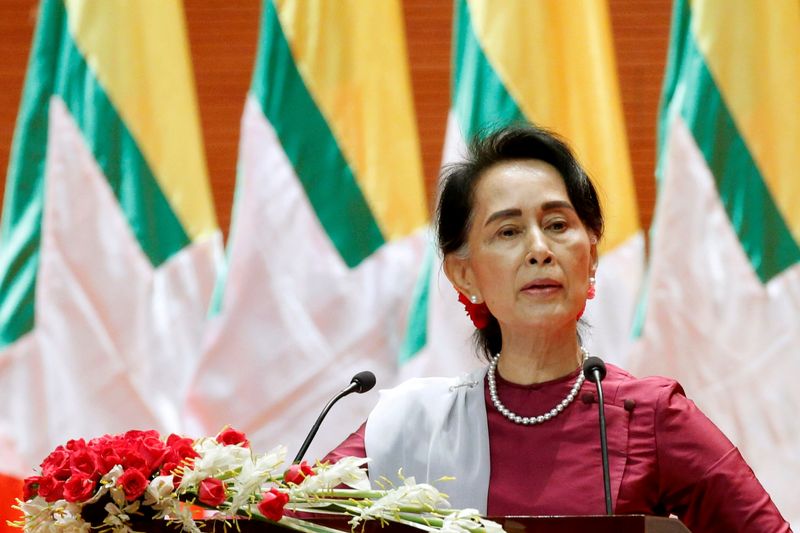 (Refiles to add dropped word “with” in paragraph 1)

(Reuters) – A court in military-ruled Myanmar will deliver its final verdicts in cases against deposed leader Aung San Suu Kyi on Friday, said a source familiar with her trials, wrapping up marathon proceedings that have been condemned in the West as a sham.

Suu Kyi, 77, was arrested when the military seized power on Feb. 1 last year in a coup that ended a decade of tentative democracy and plunged the country into chaos.

She is being held in an annex of a jail in Naypyitaw, with no access to lawyers other than on trial days, after earlier being kept under house arrest in an undisclosed location.

The Nobel Peace Prize winner, arguably Myanmar’s most iconic figure, has been convicted of multiple offences and sentenced to at least 26 years in prison in the past 12 months in trials dismissed by critics as stunts designed to keep the military’s biggest opponent at bay.

She has been found guilty of offences ranging from breaking COVID-19 restrictions and illegally owning radio equipment to incitement, breaches of a state secrets law and trying to influence the country’s election commission.

A spokesperson for the junta could not immediately be reached for comment. The military has said Suu Kyi is being given due process by an independent judiciary, noting the judge was appointed by her administration.

The court is scheduled to rule in five corruption cases against her, each carrying up to 15 years in prison, the source said on Tuesday, declining to be identified because of the junta’s efforts to suppress information about her trials.

Suu Kyi’s marathon court proceedings have taken place behind closed doors, with only limited information reported by state media and a gag order imposed on her lawyers.

It is unclear how much she knows of developments in Myanmar, where the United Nations has accused the military of atrocities against civilians, and a resistance movement and shadow government have been fighting on multiple fronts to undermine the junta’s rule. (This story has been refiled to add the dropped word ‘with’ in paragraph 1.)