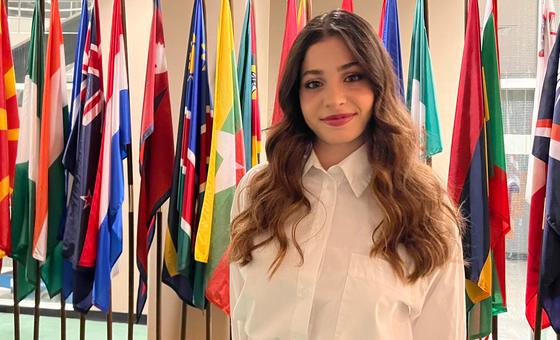 Communications chief Melissa Fleming also called the Netflix film The Swimmers, “a wakeup call” and a “hugely welcome step” for everyone to stand in solidarity with refugees.

Although Yusra and Sara Mardini were forced to flee Syria’s civil war in 2015, the biographical drama, which Netflix dropped on Wednesday, makes clear that they took their bravery and humanitarian spirit with them as Yusra went on to compete in two Olympic games.

“At a very young age, they become heroes for millions, saving people who were in peril at sea,” explained Ms. Fleming at the screening, held at UN Headquarters in New York. “And while they had to re-start from scratch, they managed to achieve their dreams through persistence and hard work”.

In illustrating the dignity, resilience, and enormous potential of these two young women, The Swimmers gives voice to all refugees.

“It allows the audience not only to feel compassion for those forcibly displaced but identify with them – imagine they’re in their shoes,” the UN official said at a preview screening earlier this month.

While the UN refugee agency, UNHCR, and other parts of the Organization have for worked for decades to protect the lives and livelihoods of those forced to flee war, violence and persecution, Ms. Fleming acknowledged that the task is becoming “increasingly challenging as displacement is getting more and more complex”.

The true story begins with the teenage sisters, who were competitive swimmers, escaping the Syrian conflict.

It shows their treacherous sea journey to Europe, when the engine on their boat cuts out mid-crossing and the sisters jumped into the water with two others and, swimming for several hours, guided the sinking dingy to safety, saving the lives of some 18 people onboard.

It continues to follow Yusra as she competes in  the Rio 2016 Olympics. She would go on to compete in the  Tokyo 2020 Olympics, and in 2017, at age 19, became the youngest ever UNHCR Goodwill Ambassador.

Who is a refugee

Like many around the world, the word ‘refugee’ meant little to Yusra – until she was forced to flee her home.

“When I was living in Syria…no one educated me about it,” she said

“This movie is going to put the conversation on the table of what a refugee is, of what we want to change”.

UNHCR NY Director Ruven Menikdiwela said, the film stands as “a powerful reminder that while refugees are individuals who have fled from conflict, war or persecution and need support, they also bring with them their incredible talents and diverse skills to the communities that welcome them”.

Before altering the way people view refugees, she emphasized that they must first understand them.

“Education systems have to change…be more open, they have to teach the stories of migrants and refugees,” the UNHCR Goodwill Ambassador explained.

Yusra was confident that The Swimmers would help educate people on the potential and value of all refugees, reminding that “we have to treat everyone the same”.

Meanwhile, acclaimed Egyptian-Welsh director Sally El Hosaini hoped that the film alters “tired stereotypes of both refugees and young Arab women,” asserting that they are just regular people “who’ve had to make unimaginable choices…in search of a safer, better life”.

Yusra’s astonishing story is not just one in a million, but – the current number of forcibly displaced people globally.

While not everyone can swim the 100-metre butterfly at the Olympics, Yusra continues to use her talent and success in speaking for refugees and influencing attitudes.

“The Olympic Games changed the way I think about being a refugee,” she said.

“I walked into the stadium in Rio, and I realized that I can inspire so many people. I realised that ‘refugee’ is just a word, and what you do with it is the most important thing.”

‘This is only the beginning’

Beyond swimming, Yusra’s plans to continue as a UNHCR Goodwill Ambassador; establish a charitable foundation on sports and education; further her studies; and perhaps, take up acting.

Despite being in the Hollywood spotlight, the young advocate has not lost sight of her calling.

“A lot still has to change for refugees,” she says. “This is not the end. This is just the beginning.”

Doubts about candidates tipped the scales in tightest races

Gazprom says natural gas transported to Moldova via Ukraine has been intercepted Xinhua News Agency, Moscow, November 22 (Reporter Liu Kai) Gazprom (Gazprom) announced on the 22nd that the company found that natural gas transiting through Ukraine to Moldova was intercepted in Ukraine. If the interception continues, Russia will reduce the volume of gas transit through Ukraine. Ukraine denied Gazprom's statement on the same day. Gazprom said the volume of gas transported to Moldova via the Sudja metering station in the Kursk region exceeded the volume recorded at the Ukrainian-Moldovan border. The total amount of natural gas intercepted in Ukraine was 52.52 million cubic meters. Gazprom said that if the interception continues, the company will reduce the volume of gas transiting through Ukraine from 10:00 on November 28, Moscow time. At present, Gazprom transports 42.9 million cubic meters of gas through Ukraine every day through the Suja metering station. The Ukrainian oil and gas company denied Gazprom's statement on the same day, saying that Ukraine has provided full amount of transit gas to Moldova. (Editors in charge: Yu Yang, Cui Yue) Share for more people to see