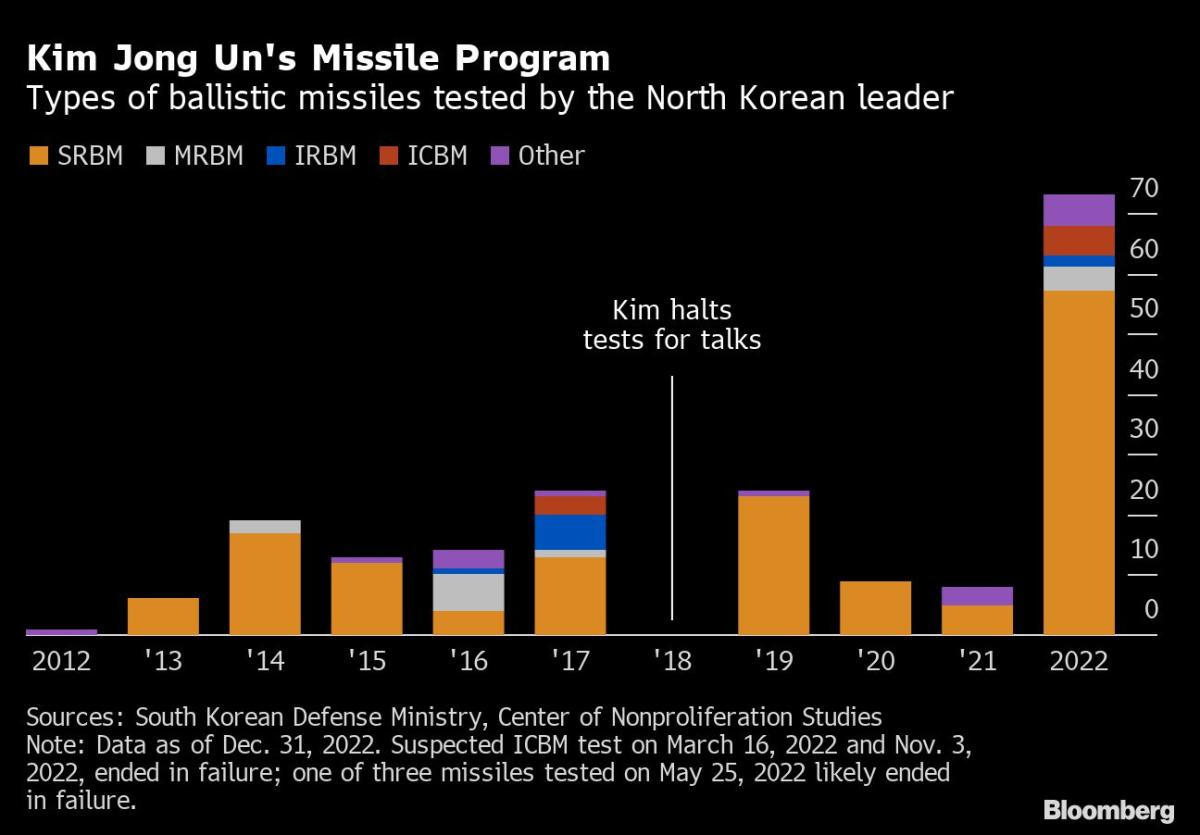 Saturday’s missiles, launched from around 8 a.m. local time, flew about 350 kilometers (217 miles) in distance at a maximum altitude of about 100 kilometers, Japan said. While the missiles didn’t pose an immediate threat to the US or its allies, the launches highlighted “the destabilizing impact” of North Korea’s ballistic missile programs, the US Indo-Pacific Command said in a statement.

In recent months, Kim has accelerated his state’s response to actions from the US and its allies that Pyongyang sees as provocative, including sending drones to the south. The missile launch came hours after South Korea on Friday had a test-flight of a solid fuel space vehicle.

Officials from Japan, the US and South Korea spoke in a phone call on Saturday, according to the Japanese foreign ministry. The three parties strongly condemned North Korea’s launch of a record number of ballistic missiles this year including the ones on Saturday, and agreed the unprecedented frequency poses a grave and imminent threat to the security of the region as well as a clear and serious challenge to the international community.

This year, Kim’s regime test-fired about 70 ballistic missiles, the most in his decade in power and in defiance of United Nations resolutions that prohibit the launches. He has stepped up provocations in recent months in a display of anger at joint military drills in the region by the US and its allies, South Korea and Japan.

Kim has been presiding over a meeting this week of his ruling Workers’ Party to review economic and political efforts for this year and decide on policy plans for 2023. He has shown no interest in returning to nuclear disarmament talks that have been stalled for nearly three years, and has pledged to never give up his atomic arsenal.

The meeting is expected to finish this weekend. On Saturday, the state’s official Korean Central News Agency said Kim has been analyzing “the recent subjective and objective situation facing our revolution and the condition and circumstances to be foreseen in the future.”

The North Korean leader has been modernizing his inventory of missiles over the past several years to make them easier to hide, quicker to deploy and more difficult to shoot down. This year, he tested missiles designed to deliver nuclear weapons to South Korea and Japan, as well as fired off intercontinental ballistic missiles with ranges that could hit the American mainland.

North Korea on Nov. 18 launched an ICBM with Kim’s daughter on hand, marking her first official appearance in state media. The move signaled there’s another generation ready to take over the Cold War’s last continuous family dynasty and it will depend on nuclear weapons for its survival.

Regional tensions would be raised even higher should North Korea carry out its first nuclear test since 2017. The US, South Korea and Japan have said for months that Pyongyang appears ready to test a device at any time and the three have pledged stern and coordinated punishments if Kim goes ahead.

But the North Korean leader is finding space to ramp up provocations and conduct tit-for-tat military moves against the US and its allies as President Joe Biden focuses on Russia’s war in Ukraine.

The US push to isolate Vladimir Putin, coupled with increasing animosity toward China, has allowed Kim to strengthen his nuclear deterrent without fear of facing more sanctions at the UN Security Council. There’s almost no chance Russia or China, which have veto power at the council, would support any measures against North Korea, as they did in 2017 following a series of weapons tests that prompted former President Donald Trump to warn of “fire and fury.”

Biden surveys storm damage in California after flooding and landslides

The Kensington neighborhood of Philadelphia – known as ‘ground zero’ for the city’s drug epidemic – is in crisis due...

Jan. 19—GOSHEN — A man charged with shooting and killing his roommate is expected to face trial Monday. Dustin McKee,...