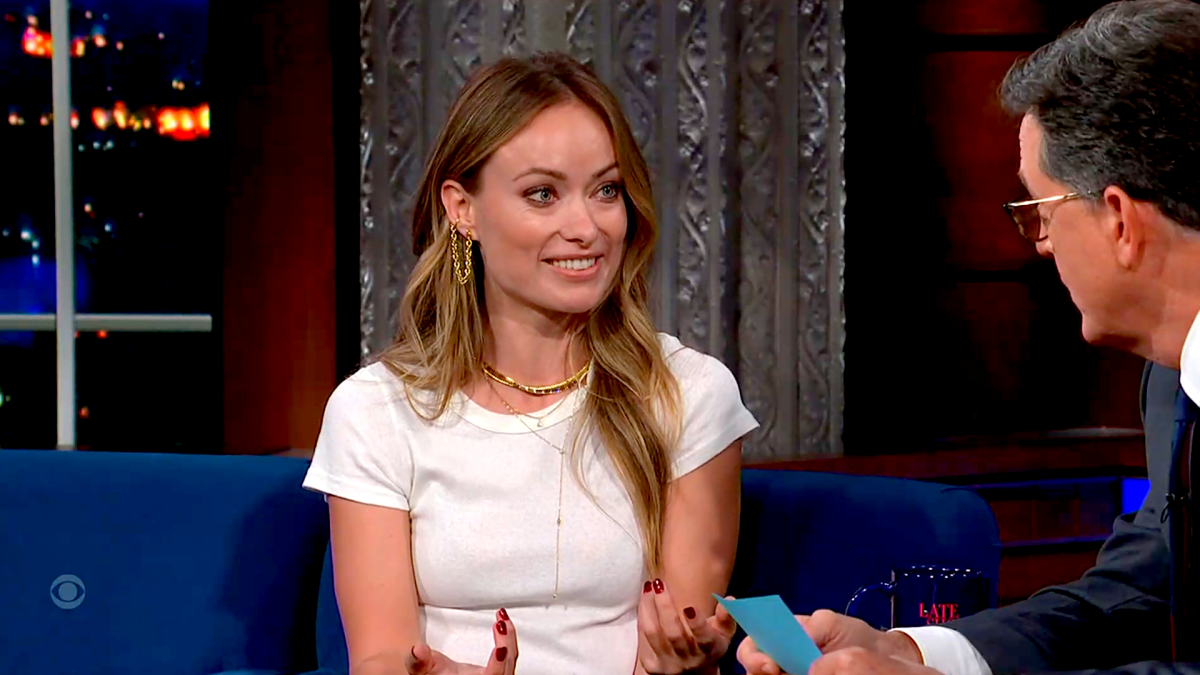 Olivia Wilde joined The Late Show With Stephen Colbert Wednesday to promote her new film, Don’t Worry Darling, which she directed and starred in. But, of course, Wilde was also forced to address the outrageous story that Harry Styles spit on Chris Pine, both of whom also star in the film, at the Venice Film Festival earlier this month. Representatives for Pine have already denied that the incident occurred, calling it a ridiculous story and a complete fabrication. And Wilde was adamant that the rumors are false.

“People will look for drama anywhere they can,” Wilde said. “Harry did not spit on Chris.” “Time will tell,” Colbert joked. “No,” Wilde replied, “he really didn’t.”

Wilde pointed to a video of the alleged incident that circulated online as proof that Styles did not spit on Pine, and people are just seeing what they want to see.

“That is exactly what I mean though,” Wilde said. “People can look at a video that shows evidence of someone not spitting on someone else, and they’ll still see what they want to see. And that is the creation of drama, and that is clickbait.”

The Late Show With Stephen Colbert airs weeknights at 11:35 p.m. on CBS.

Check out how The Goldbergs killed off Jeff Garland’s character on the season premiere: ‘We will always love you’:

Khloé Kardashian shares never-before-seen footage of baby no. 2 being born

‘The Goldbergs’ kill off Jeff Garlin’s character on season premiere: ‘We will always love you’

As the Russia-Ukraine war enters its 223rd day, we take a look at the main developments.

The Lakers front office couldn't come to a consensus and didn't do the deal, according to a new report.

Oct. 4—Niagara Falls —ROBBERY: Police are investigating a robbery in the 400 block of 19th Street. A male victim told...

Kawhi Leonard made his long-awaited return to competitive play and John Wall made his anticipated debut for the Clippers against...