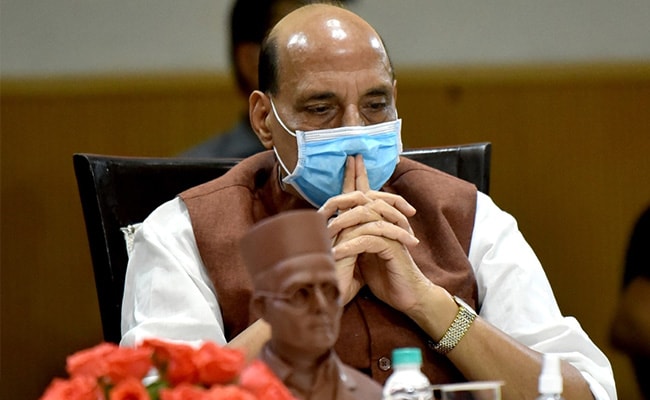 Shri Rajnath Singh, on the occasion of the release of a book on VD Savarkar said, “Lies are spread about Savarkar repeatedly. It was spread that he filed many mercy petitions seeking his release from jails. It was Mahatma Gandhi who asked him to file the mercy petitions….”

So here we have, perhaps for the first time, a senior leader of the BJP admitting that their icon Savarkar, had in fact written mercy petitions to the British. To whitewash the contrast of their icon who cravenly begged for mercy compared to the heroes of the freedom struggle who braved the torture and inhuman conditions of the jail in the Andamans in their courageous defiance of British rule, the BJP now wants to invoke the name of Gandhi. Gandhi-ji himself was arrested eleven times by the British. Did he make a single apology to the British to be let off?

Let’s go by the pithy saying: never argue about matters of facts – or another – search for truth from facts. Those wanting to know facts may like to study the highly informative, educative, meticulously-researched writings of AG Noorani on the subject of Savarkar. As Noorani points out in his book Savarkar and Hindutva, and also in his essay Savarkar’s Mercy Petition, which he successfully unearthed from the National Archives of India, Savarkar wrote not one but several petitions of mercy to the British.

He was arrested by the British on separate charges of murder and abetment to murder of British officers. He was incarcerated in the Andamans jail in June 1911. Savarkar’s first petition for mercy was sent within a few months of his arrest. Although the text of that 1911 petition is not available, he referred to it in his second petition to the British authorities on November 14, 1913. He wrote “I remind your Honour to be so good as to go through the petition for clemency I had sent in 1911…” and further, “I am ready to serve the Government in any capacity they like…the mighty alone can be merciful and therefore where else can the prodigal son return but to the parental doors of the Government…”

These petitions actually pledged the offender to serving the British. Between 1911 and 1913, when these two mercy petitions had been written by Savarkar, Gandhi-ji was in South Africa. He returned to India only in 1915. How then could he have advised Savarkar to plead for mercy? These facts prove that Rajnath Singh’s claim is utterly false.

In 1914, Savarkar again asked for mercy, this time promising he would serve the British in any capacity they chose. He also asked for clemency for all political prisoners. He believed a general amnesty would help his own release and that of his brother. He reiterated this demand in 1917. Thus there were at least four mercy petitions, three of them assuring full support to the British, signed by Savarkar before any contact had been made with Gandhi regarding their case.

According to material published in the Collected Works of Gandhi, it was only in January 1920 that Gandhi received a letter from the third Savarkar brother pleading for advice on what should be done to get his two brothers released. Gandhi’s reply was clear enough. He wrote “I have your letter. It is difficult to advise you. I suggest, however, your framing a brief petition setting forth the facts of the case bringing out in clear relief the fact that the offence committed by your brother was purely political.” What Savarkar wrote to the British was not at all what Gandhi advised. On the contrary, it was (once again) cringe-worthy, promising the British utmost loyalty and a pledge to work for the British. He wrote that his release would “render me personally attached and politically useful”. It is an insult to Gandhi’s memory to distort the note written by Gandhi to claim that Savarkar’s actions were on Gandhi’s advice. They had nothing in common.

Moreover, the point to be noted is that these mercy petitions were no ordinary ones. It was not unusual for prisoners to plead for clemency on health or humanitarian grounds. This would enable them to get out of jail. Many prisoners were in fact released by the British on such grounds. But Savarkar’s mercy petitions pledged allegiance to the Crown and indeed promised to work for the British. And on his release in 1924, this is exactly what he did.

From his first mercy petition in 1911, describing himself as a “son” of the British Government, to his promise in 1920 to be politically useful to a colonial power, Savarkar’s distance from the values of India’s freedom struggle cannot be bridged by manufacturing history or in distorting it as was sought to be done by Rajnath Singh. It seems that he spoke on the basis of a biased RSS briefing. The RSS, as we know, is like a Union Minister in a Ministry of Defence of Untruths to obfuscate truth and facts.

Mohan Bhagwat, the RSS chief, was also present on the occasion. He made the claim that Savarkar was never anti-Muslim, the evidence of which was his writing ghazals in Urdu! The highly-divisive Hindutva concept and ideology propagated by Savarkar is thus sought to be whitewashed. Hindutva is a political concept which has nothing to do with religious beliefs. As is well-known, it was Savarkar who, in his Presidential address to the Hindu Mahasabha in 1935, first described Muslims and Hindus as two separate nations. This suited the British policy of divide and rule.

The core of the ideology links religion with nationalism on the theory that only those for whom the fatherland or pitrbhumi is also the holy land or punyabhumi can be accepted as children of mother India, thus effectively excluding Muslims and Christians from being citizens of what he considered India to be the Hindu nation or rashtra.

Gandhi-ji was killed by those who were inspired by this ideology. Today that ideology is being glorified by those in power. How many more times will he be killed?

Disclaimer: The opinions expressed within this article are the personal opinions of the author. The facts and opinions appearing in the article do not reflect the views of NDTV and NDTV does not assume any responsibility or liability for the same.