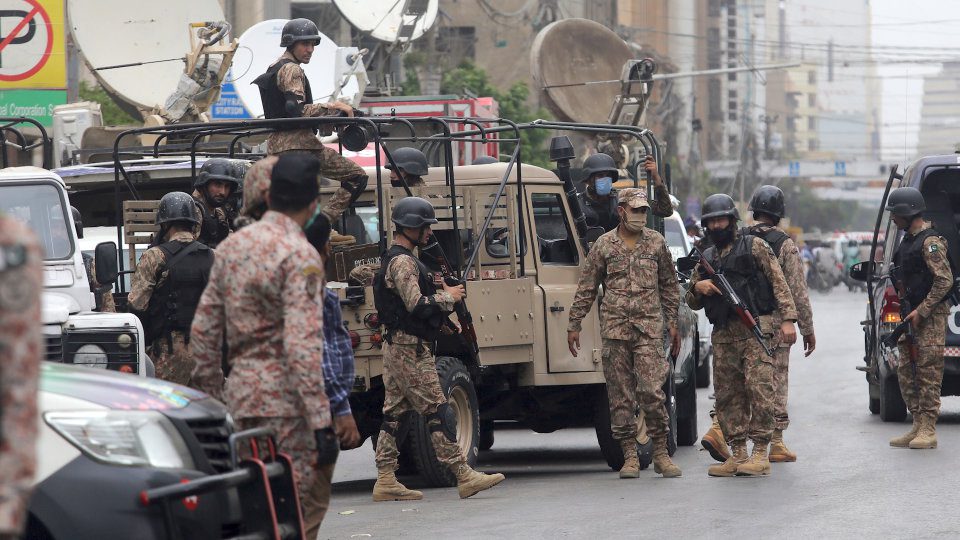 Salman Baloch, one of the attackers, purchased a Toyota Corolla from a showroom located on Khalid Bin Waleed Road, Karachi, by paying cash for which he had also submitted his original CNIC (Identity Card), a record of which was owned by the Excise Department.

Terrorist Route: Gharibabad Lyari Expressway to Maripur road and from Tower Custom House they reached the Stock Exchange Building. Investigators found two mobile phones from the terrorists, one smartphone and one simple phone, and terrorists were in contact with someone who was giving him direction. According to investigators, phone numbers have been traced and an arrest will be made soon.

Karachi: June 29, 2020 morning of June 2, 2020, at 10:00 a.m., news came from Karachi II Chundrigar about a firing and hand grenade attack. Four terrorists attacked the Pakistan Stock Exchange compound on I.I. Chundrigar Road, one of the busiest streets and a business hub in Karachi.
Police, Rangers, and security officials reached the spot as soon as the attack was reported, and a large convoy of law enforcement agencies rushed outside the stock exchange building. The terrorist attack was foiled by law enforcement within minutes. After the attack, security personnel cordoned off the surrounding areas while II Chundrigar Road was closed to traffic from Meri Weather Tower and Shaheen Complex.

Security guards who were on duty outside the stock exchange building fought bravely against the terrorists. The terrorists reached the compound (Parking Area) of the building in a vehicle (City Car).

According to eyewitnesses, the number of attackers was four, while the bodies of two terrorists were found near the door in which one security guard was injured. After the attack, the door of the stock exchange building was closed. Employees of the stock exchange have locked themselves in rooms. According to a Sindh Rangers Spokesperson, all four terrorists involved in the attack have been eliminated, the building has been cleared and the Bomb Disposal Squad team has been called. According to DIG South, “The vehicle in which the terrorists arrived has also been seized and is now in our custody, we have traced the car via Engine number The terrorists have purchased the car.”

Three security officials were martyred along with the two citizens. According to the initial investigation, the attackers wanted to take their vehicle inside the building and wanted to hostage the people who were employees of the stock exchange. According to sources, around 1500 to 2000 employees were working on the stock exchange at the time, and two terrorists were killed on their way inside the building, evidence gathered by investigators shows. Law Enforcement agencies have recovered four SMGs and four bags of food from the terrorists, including bottles, dates, and other items. The attackers were spying in the area before the attack. Police have also recovered a few hand grenades which were later defused by the BDS. 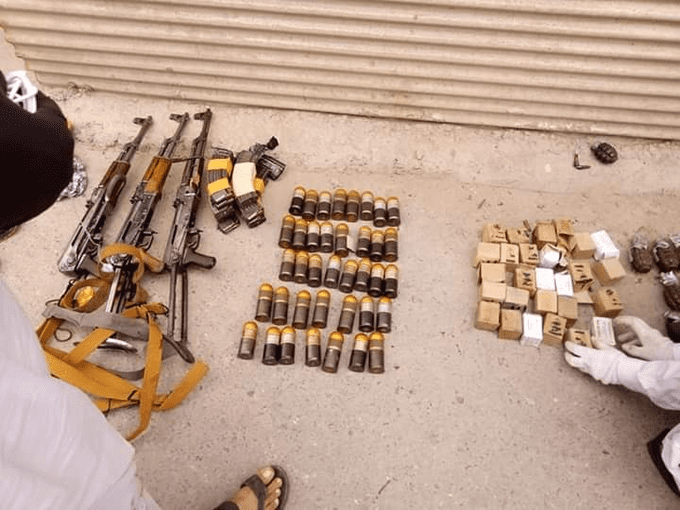 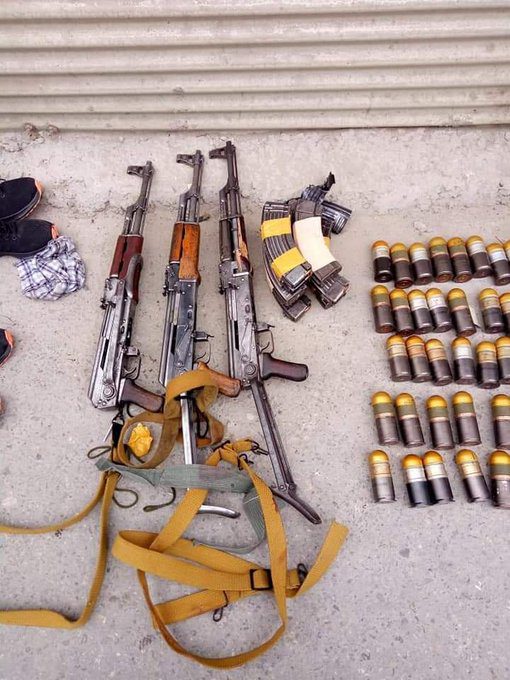 According to security agencies, the forces responded promptly and foiled the attack. The terrorists entered the building through a parking lot of the stock exchange. they planned to take people hostage, according to DIG South’s Sharjeel Kharal, and the attackers had sophisticated weapons. They had modern weapons, rifles, Kalashnikovs, and hand grenades, but brave security guards thwarted their attack. 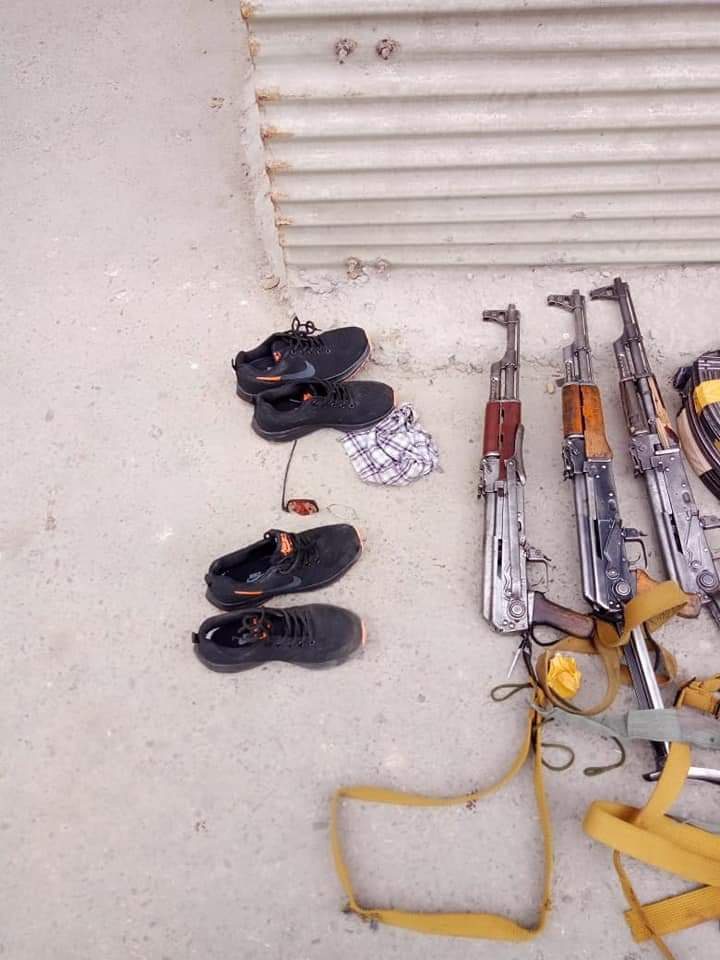 SMGs and Rifle and other weapons recovered from the terrorists 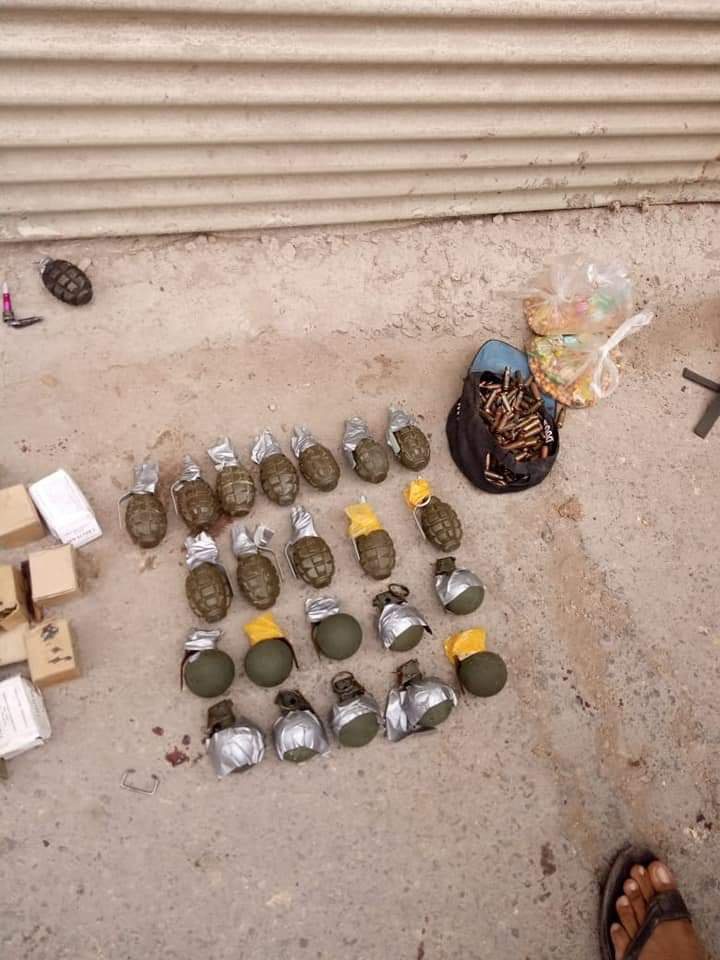 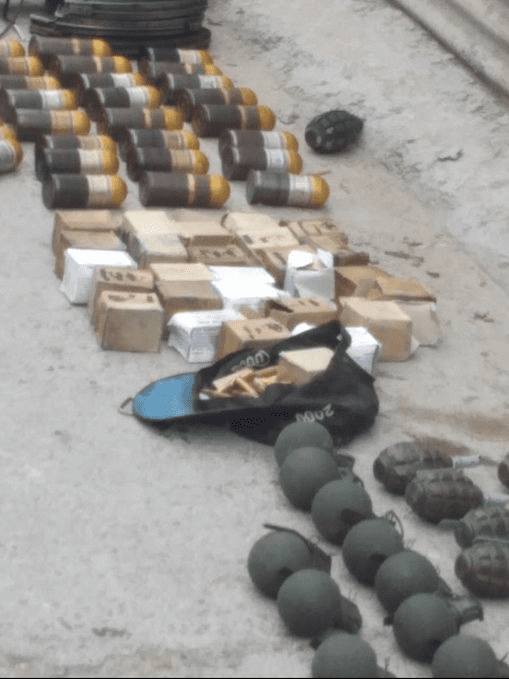 According to Raja Umar Khattab Counter-Terrorism Department, the car used in the attack was registered in the name of Salman, who was one of the attackers and a resident of Balochistan. The car recovered from the terrorists was cleared in CPLC records, car number BAP 629 silver-colored corolla.

Who were the attackers? Detailed investigation

Responsibility was claimed by the banned terrorist outfit BLA via Tweet, and once again a Twitter platform is being used by the terrorists. According to Raja Umar Khattab Counter-Terrorism Department, the car used in the attack was registered in the name of Salman, one of the attackers and a resident of Balochistan. The car recovered from the terrorists was cleared from CPLC records, car number BAP 629 silver-colored corolla. DG Rangers Sindh Major General Omer Bukhari has said that Indian intelligence agency RAW is involved in supporting the terrorists who attacked the Pakistan Stock Exchange.

Last month ex-Indian Major Gaurav Arya was given the threat to kill people in Pakistan via BLA (Baloch Liberation Army). According to the Sindh Rangers attack was reported at 10:02 am and we have eliminated the terrorists at 10:10 am which means the forces ended the operation in 8 minutes only. DG Rangers said the target of Pakistan’s leading building Pakistan Stock Exchange was to harm the prosperity of Pakistan, but despite this terrorist attack, work on the stock exchange continued and remained positive.

He further said that the intelligence agency of the neighboring country ‘RAW’ was involved in the backing of the terrorists. Yes, we have started working against them and we will destroy them.

The attacker’s name are as follows:

Updated on 30 June 2020, the Banned Terrorist Organization claims responsibility for the attack on the Pakistan Stock Exchange, an account on Twitter has been suspended but one of the attackers Salman Baloch’s accounts has not yet been suspended.

… and integrated response of Pak Rangers & Sindh Police, eliminating terrorists in shortest possible time. “With support of our resilient nation, we will foil all efforts of enemies aimed at destabilizing hard earned peace achieved through sacrifices of our martyrs” COAS. (2/2)

Strongly condemn the attack on PSX aimed at tarnishing our relentless war on terror. Have instructed the IG & security agencies to ensure that the perpetrators are caught alive & their handlers are accorded exemplary punishments. We shall protect Sindh at all costs.

I salute our brave police & security personnel who thwarted the condemnable terrorist attack in Karachi on #PakistanStockExchange. pic.twitter.com/WGcM28wzSI

Rafiq Soomro and Khalil Jatoi were the two security personnel who killed the attacker via a headshot, these two policemen are a hero of Pakistan, and Pakistan is proud to have them 🙂 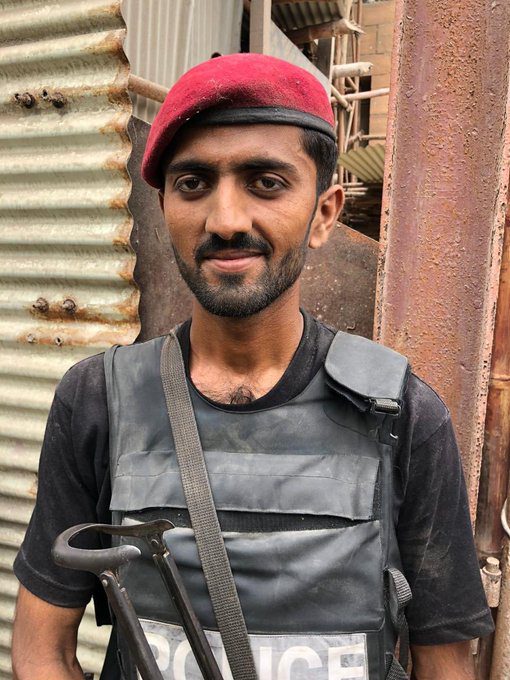 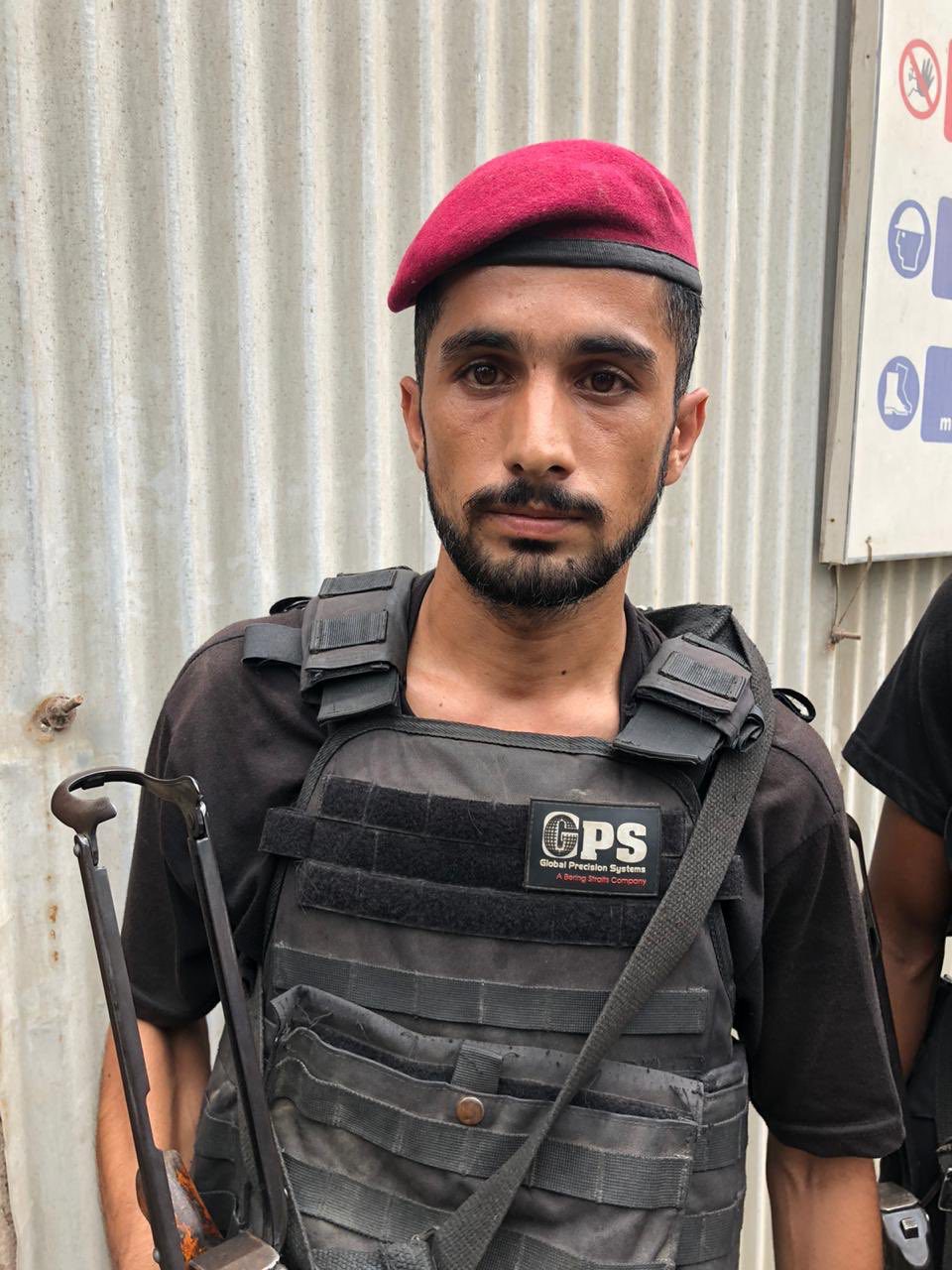 Thank you Pakistan Rangers Sindh, Rapid Response Force, Sindh Police, and Pakistan Army, this was not an intelligence failure, but it is a success of law enforcement that we have eliminated four terrorists in 8 minutes. May Allah give higher rank in Jannat to the martyred people Ameen, and Thank you to the martyred police officers.

Related Topics:stock market
Up Next