Pinterest launches TwoTwenty, its own in-house incubator for new projects 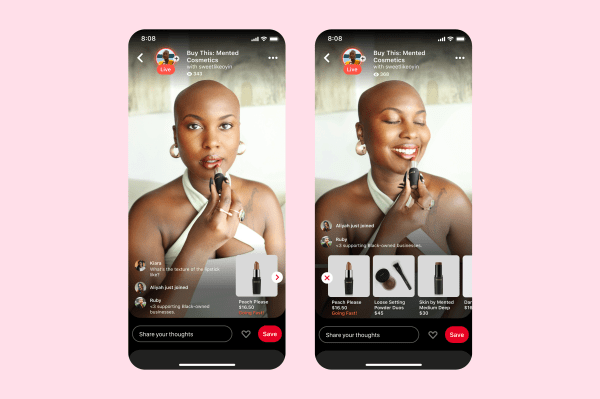 Pinterest today announced a new initiative designed to help the company increase its pace of innovation. The company is introducing an in-house, experimental products team it’s called TwoTwenty — named after the address of Pinterest’s first office. The team is comprised of engineers, designers, and other product experts who will research, prototype and test new features and ideas, then identify those that gain traction. Successful products will be then handed off to other teams within the company to take to scale.

The team has already had its hand in some of Pinterest’s latest launches, the company notes. Its first exploration was with the live-streamed creator events, which later evolved to include features like the ability to rewatch livestreams and support for shopping product recommendations. These became a part of Pinterest’s recently announced product, “Pinterest TV,” a live shopping feature on the app that aims to compete with rival services from Facebook, Instagram, TikTok, and other dedicated live stream shopping platforms.

The Pinterest TV lineup includes a host of “shows” from creators, where fans can interact and ask questions while participating in the live shopping event. And it offers a virtual studio to creators, which was also an idea that emerged from TwoTwenty’s work, Pinterest says.

The idea to create an in-house team now dedicated to new project ideas comes at a time when Pinterest is trying to reinvent itself for the modern era of online social, which is more focused on formats like video and live streaming amid a maturing creator economy.

In that light, the launch of Pinterest TV represented a significant pivot away from Pinterest’s original idea of an online image pinboard where users research and discover new ideas, which sometimes translate into an online purchase. With video and live shopping, Pinterest aims to better attract a younger demographic who has grown up with social apps like Instagram and TikTok, where video and live content is core to the experience. If it fails to successfully make this shift, it could be on its way out as a top social platform. (In fact, reports that Pinterest was discussing an exit by way of PayPal have been circulating, but PayPal said it’s not pursuing an acquisition at this time.).

Pinterest explained its new incubation team will field ideas from an online submission portal called the “Idea Factory” as well as from its company-wide “Makeathons” (hackathon events). The team will then further experiment with the ideas and prototypes to see if any gain traction. Initially, the team includes Product Lead David Temple, who’s been heading up creator products; early engineer Ryan Probasco; and Content Lead Meredith Arthur, previously of CBS; Albert Pereta, who joined Pinterest by way of its 2014 Iceberg acquisition; among others.

In total there are 15 people on the team now and it’s actively recruiting new members.

Facebook, for instance, launched its “NPE Team” in 2019 to test out new ideas and features, to see how users would react. But over the years, none have scaled to become their own, new Facebook (now Meta) brand — they’ve instead informed the development of other Facebook and Instagram features. Meanwhile, Google had been allowing its more entrepreneurial-minded employees to experiment within its Area 120 in-house incubator. By comparison, this group has launched a number of successful products that have exited to other areas of Google’s business, like Search, Shopping, Commerce, and Cloud. That team has now been elevated with the recent reorg that sees it under new leadership and paired alongside other long-term-focused innovations, like the holographic videoconferencing project known as Project Starline.

“With TwoTwenty, we prioritize a collaborative approach and accelerate ideas from employees around the company,” said Temple, in an announcement. “With the resources of an established brand, we’re able to explore and invest in new solutions to help people find inspiration to live a life they love,” he added.