Putin has 2 daughters he barely ever talks about, and is rumoured to have at least 2 more. His rumored mistress has just been slammed with sanctions. 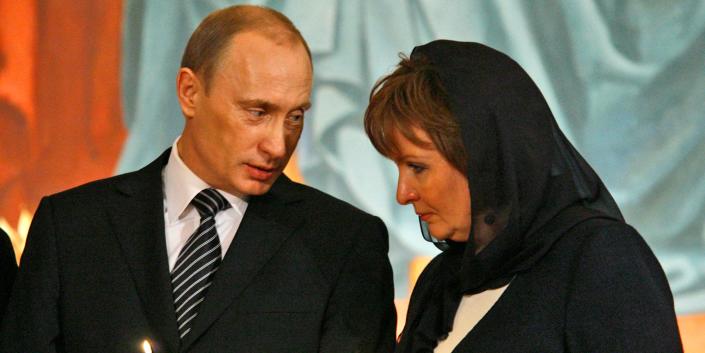 President Vladimir Putin is famously secretive of his personal life, and has fought hard to prevent the media and the world from knowing much about his family.

He has long made a concerted effort to shield his children from the spotlight.

Putin has never publicly acknowledged his children, though media outlets have for years speculated and reported about the two daughters Putin had with his ex-wife.

Further reports center around rumors that two extramarital affairs may have produced another two daughters.

But as international pressure mounts on Russia following its invasion of Ukraine, sanctions have closed in on his personal networks and in particular, his children and rumoured girlfriends.

One daughter from his first marriage, Katerina Tikhonova, has been entrusted with a key job overseeing import substitutions as Russia reels under sanctions.

And in August, ex-gymnast Alina Kabaeva — with whom Putin is rumoured to have had two children — was sanctioned by the US government.

Here is what we know about the lives of Putin’s secret kids and girlfriends.

Pat Ralph contributed reporting to previous versions of this article.

Putin had two daughters in his first marriage to former flight attendant Lyudmila Shkrebneva, to whom he was married for three decades until their divorce in 2013.

Their daughter’s names are Maria and Katerina. Maria was born in Leningrad in 1985, and Katerina was born in Germany in 1986 when the family lived there during her father’s time in the KGB.

Masha and Katya are common Russian shortenings for Maria and Katerina.

When the family moved to Moscow in 1996, the girls attended a German-language school. The children were reportedly removed from school when Putin became acting president, and teachers educated them at home.

“Not all fathers are as loving with their children as he is,” Lyudmila said in a quote on Putin’s government website. “And he has always spoiled them, while I was the one who had to discipline them.”

Maria studied biology in college and went to medical school in Moscow, while Katerina majored in Asian Studies in college. Both girls attended university under false identities.

Maria, now 36, is a medical researcher and lives in Moscow with her Dutch husband, Jorrit Faassen.

Maria and Faassen reportedly have a child — Putin told filmmaker Oliver Stone in 2017 that he was a grandfather. When Stone asked if he played with his grandchild, Putin replied, “Very seldom, unfortunately.”

Katerina, now 35, is an accomplished acrobatic dancer and has a senior position at her alma mater, Moscow State University, heading a $1.7 billion startup incubator.

Katerina married Russian billionaire Kirill Shamalov in 2013. But the couple divorced in 2018, and the divorce case revealed they were worth $2 billion.

But flight records suggest that in 2017, Katerina had begun a clandestine relationship with German ballet star Igor Zelensky. She had a daughter with him.

Zelensky has served as the director of the Bavarian State Ballet and the Munich State Ballet.

Katerina secretly flew to Munich more than 50 times to see Zelensky between 2017 and 2019, with their daughter in tow.

The relationship was revealed by a 2022 investigation that examined Katerina’s flight records, showing that she traveled with members of Putin’s presidential secret service.

There are no official current photos of the girls. For Katerina, we found the slightly varying first names “Katerina”, “Katya”, and “Yekaterina,” and the last names “Putina,” “Tikhonova,” and “Shamalov.”

There are rumors that Putin has a third daughter with girlfriend and former Russian rhythmic gymnast Alina Kabaeva.

Neither the child nor the relationship with Kabaeva have been confirmed.

Finally, an investigation claimed that a former cleaning lady, Svetlana Krivonogikh, had an affair with Putin and suddenly moved into one of St Petersburg’s wealthiest neighborhoods.

An investigation by independent Russian outlet Proekt claimed that the pair had a close friendship between the late 1990s and the end of the 2010s, which resulted in a daughter.

In that time, Krivonogikh went from a former cleaning lady to the billionaire owner of one of Putin’s favourite ski resorts, according to the Organized Crime and Corruption Reporting Project.

Krivonogikh’s daughter, born 2003, is called Elizaveta Vladimirovna Rozova, and also goes by Luisa. Identity papers do not indicate a father, but her middle name means “daughter of Vladimir.” She has not confirmed any relationship.

The Proekt investigation remarked on Elizaveta’s “phenomenal resemblance” to Putin and many connections between the president and her mother, but no relation has been proven.

In an interview with Russian GQ, Elizaveta’s face was not depicted. When asked whether she looked like Putin, she agreed, but said “there are a lot of people similar to Vladimir Vladimirovich,” using an alternative, respectful name for Putin.

Putin has tried to shelter his children from the media, attempting to keep them out of politics so they can live normal lives.

Despite this, Katerina made her debut on Russian state TV as a biotechnology expert in December 2018.

Her appearance did not include comment on her being related to Putin. The link was briefly made public in the course of a dance competition, but later retracted.

In June 2021, Katerina addressed a conference that is Russia’s equivalent of Davos — but nobody called her Putin’s daughter, apparently out of fear of reprisal from the Kremlin.

In late 2020, Putin announced Russia had completed its COVID-19 vaccine, although it had yet to complete clinical assessments. Putin said he gave the shot to one of his two daughters, but wouldn’t specify which one.

Putin said his daughter’s temperature decreased after getting two shots. “She has taken part in the experiment,” he said, adding, “She’s feeling well and has a high number of antibodies.”

It was a rare acknowledgment for Putin, but one still shrouded in mystery.

In February 2022, Russia invaded Ukraine, prompting condemnation from around the world. Three weeks later an activist filmed himself inside what he said was a Biarritz apartment owned by Katerina’s ex-husband, saying he wanted to host Ukrainian refugees there.

In April, the US sanctioned Maria and Katerina, saying that they had “enriched themselves at the expense of the Russian people.” A statement said “This action cuts them off from the US financial system and freezes any assets they hold in the United States.”

The Wall Street Journal said that the EU could also sanction the two women.

An EU spokesperson said the bloc is “currently discussing the proposals for further sanctions, including new listings of individuals and entities,” but could not comment on who would be targeted by them.

The US announcement also contained more details about their work. saying that it has close ties to the Kremlin. Tikhonova’s work supports Russia’s government and defense industry, while Vorontsova’s genetics research programs are personally overseen by Putin, the White House said.

The US said it believed the women are hiding assets for Putin, which was its rationale for sanctioning them. The Kremlin expressed confusion over the decision, suggesting it was anti-Russian.

A senior official at the Biden administration said: “We believe that many of Putin’s assets are hidden with family members and that’s why we’re targeting them.”

Putin’s top spokesperson Dmitry Peskov said the Kremlin found the decision “difficult to understand” and framed it as part of a “rabid” western animosity towards Russia.

The UK quickly followed suit with a raft of sanctions on Maria and Katerina, among others in Putin’s inner circle, aimed at hitting their “lavish lifestyles.”

In July 2022, as sanctions began to bite in Russia, Tikhonova was given a top post overseeing import substitutions.

Tikhonova was appointed to the post at the Russian Union of Industrialists and Entrepreneurs. State media reporting on this did not mention her relationship to Putin.

Four months later, the US added Kabaeva to its sanctions list, citing her ‘close relationship’ with Putin.

The US government had initially held off sanctioning Kabaeva on the basis that it would be too personal a provocation.

But Kabaeva was finally sanctioned on August 2 over her ties to the Russian government. She had become a politician after retiring from sports, and as of 2022 was head of the pro-Kremlin National Media Group.