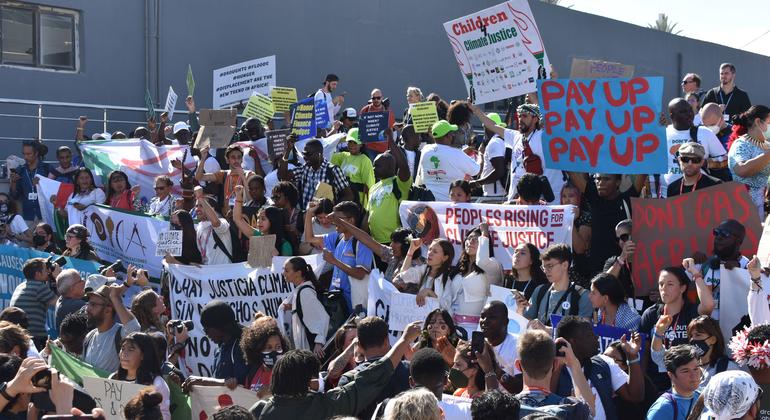 Climate activists and civil society have been subjected to intimidation, harassment and surveillance during the two-week gathering, held in the resort town of Sharm El-Sheikh, they reported.

“We are deeply concerned by reported acts of harassment and intimidation by Egyptian officials, infringing the rights of Egyptian and non-Egyptian human rights and environmental defenders at COP27, including their rights to freedom of peaceful assembly, expression, and effective participation,” their statement said.

They urged Egypt to end all harassment and intimidation, and to ensure the safety and full participation of human rights defenders and civil society.

The four experts are all Special Rapporteurs appointed by the UN Human Rights Council.

They monitor and report on issues such as the situation of rights defenders worldwide, and the right of everyone to a safe, clean and healthy environment.

COP27 was due to end on Friday but is almost certainly set to continue into the weekend.

Last month, the experts issued a press release raising concerns ahead of the conference and calling for full and safe participation of civil society and human rights defenders without reprisals.

However, they said they have received multiple reports and evidence of civil society members, including indigenous peoples, being stopped and interrogated by Egyptian security officers.

One human rights defender scheduled to attend COP27 was also denied entry to the country, they reported.

“We are concerned that these actions by Egyptian authorities have a chilling effect, impacting wide segments of civil society participating in COP27 as many groups have expressed concern about the need to self-censor to ensure their safety and security,” the experts said.

The experts received reports of activists being subject to intrusive questioning at the airport when entering Egypt, sparking fears that information collected on the activities of civil society organisations during COP27 could be misused.

They also expressed concern that once the spotlight shifts from Egypt when the conference ends, local human rights defenders could be targeted and risk reprisals for their engagement during the event.

“We call on Egypt to immediately end harassment and intimidation, to ensure the rights to participation, freedom of expression and of peaceful assembly at COP27, and abstain from reprisals against civil society, human rights defenders and indigenous people’s representatives who attended COP27,” they said.

The experts are engaging with the Egyptian Government and the UN climate change secretariat, UNFCCC, on this issue.

They receive their mandates from the UN Human Rights Council, which is based in Geneva.

These experts are independent of any government or organization, and work on a voluntary basis.

They are neither UN staff, nor are they paid for the work.

Frisch concedes race against Boebert as it goes to recount

US and China trade officials meet in Thailand, resuming dialogue on economic policies