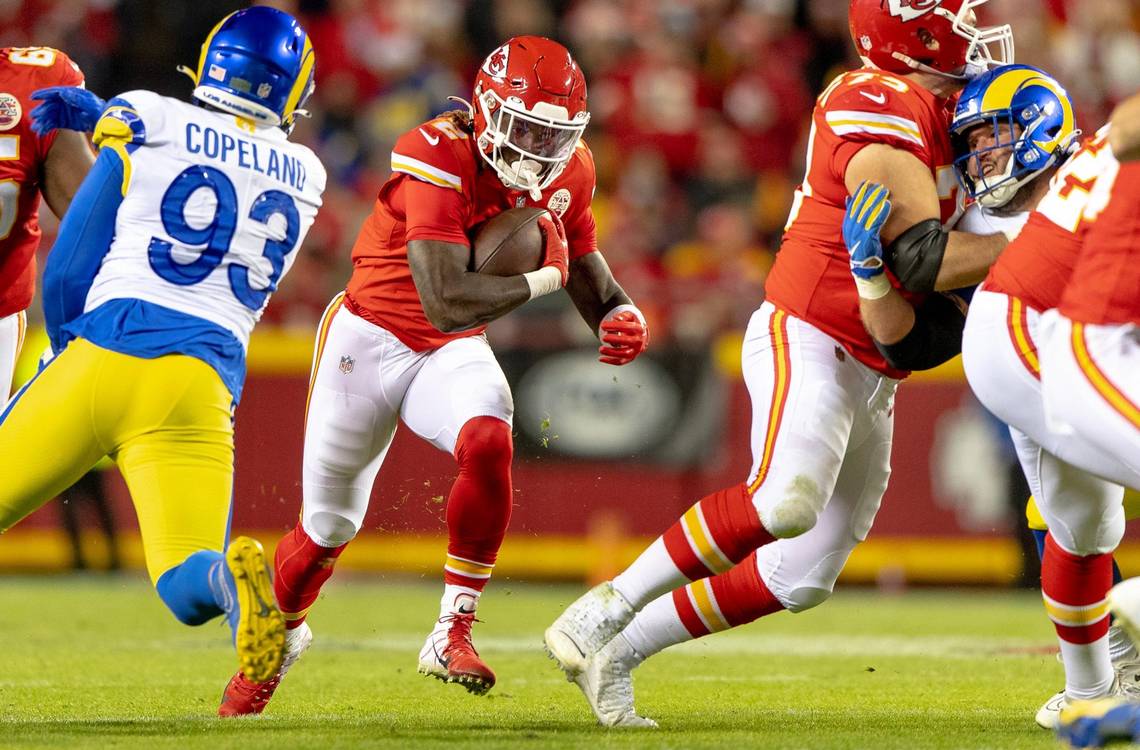 Ronald Jones smiled in front of his locker, describing how he felt after getting his first snaps of the season in the Kansas City Chiefs’ 26-10 home victory over the Los Angeles Rams on Sunday.

“Getting out there game speed is a little different — huffing and puffing — but I was glad to be out there,” Jones said with a laugh. “I could play another quarter right now.”

It was quite the path for Jones to get to this point; he was added to the Chiefs’ active game-day roster for the first time all season following an ankle injury to running back Clyde Edwards-Helaire last week.

Jones, who said coaches told him that he would get a few plays this game, finished with four carries for 12 yards while adding a 22-yard reception.

“Just being out there — literally suiting up — is still a dream I’ve had since a child,” Jones said. “So being able to relive that feeling is indescribable.”

Jones also spoke publicly for the first time since airing out some of his frustration online last month.

On Oct. 28, Jones tweeted, “Sure would like a RELEASE right about now.” That was amid a 10-week stretch when he was announced as a game-day inactive behind Chiefs running backs Edwards-Helaire, Isiah Pacheco and Jerick McKinnon.

Jones spoke about that comment Sunday night, saying it resulted from him being a competitor.

“You know me, man. Gotta get out there. Gotta get the touches. Gotta feed the family,” Jones said. “It’s a kids’ game at the end of the day. Just having fun with it.”

Jones, in early November, declined comment regarding the tweet. When asked about it on Nov. 4, coach Andy Reid said Jones would be playing for most teams even if things hadn’t worked that way yet with the Chiefs.

The 25-year-old Jones — a former second-round pick of the Tampa Bay Buccaneers — admitted that it wasn’t easy to remain patient these last three months.

“I guess that part for anybody that’s healthy and not active … you’re gonna want to be out there,” Jones said. “We do this night and day. So it’s just human nature.”

Jones’ first touch of the regular season came on a pass play. During the second quarter, he caught a ball in the flat and took it 22 yards, helped by tight end Travis Kelce shielding his defender downfield.

Interestingly, in the first half, Jones’ 22 receiving yards matched that of the entire Rams team.

Jones said he didn’t know the throw from quarterback Patrick Mahomes was coming his way before the snap.

“We work it in practice all the time, so you’ve got to stay ready,” Jones said. “He’s a magician back there, so he could hit any one of us at any time.”

Pacheco — he led the Chiefs’ ground game with 22 carries for 69 yards with a touchdown — said he liked what he saw from Jones on Sunday.

“Definitely a great leader out there,” Pacheco said. “In practice, we’re going to push each other, compete, so when it’s time for it — on the field or in the game — we’re able to execute.”

Jones also praised Pacheco, saying he was “definitely a warrior as a rookie.”

“I’ve gotta take my hat off to him. That was very impressive,” Jones said. “I’m just here to be a complement and help the team win in any way possible.”

In pursuit of his second Super Bowl ring, Jones also said he was open to new roles if that’s what was needed from the Chiefs ahead.

“Whatever they ask me to do, whether it’s run down on kickoff, this and that,” Jones said, “I’m with it honestly.”

While congressional Republicans start zeroing in on the Biden administration, the president prepares to meet the nation’s mayors on an issue...

This is the terrifying moment a 30-seater school bus with children inside burst into flames in London.  Firefighters rushed to...

Indianapolis killings in 2023: Tracking every homicide

After three years of seeing more than 200 homicides annually, IndyStar is continuing to track each killing to better understand...