US raises tariffs on French and German wines & aircraft…

Czechia to continue deporting Afghans, unlike other European… 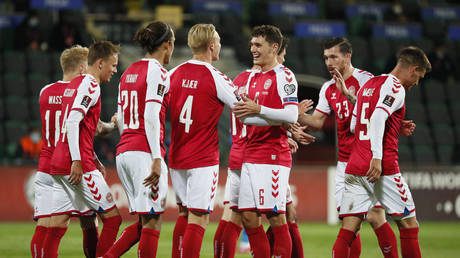 A Danish hotel boss has reprimanded staff after allegations of a wild pool party involving female workers and stars of the national football team ahead of a World Cup qualifier, prompting an investigation.

Local reports claimed that players and women were involved in “scantily-clad excess” at a hotel in Elsinore last week.

The Danish team, who memorably reached the semifinals of Euro 2020 this summer where they fell to England, were set to fly to Chisinau for a qualifier last weekend against Moldova.

But the events that allegedly unfolded caused the Hotel Marienlyst’s manager Michael Lauritsen to fume.

In an internal email reported by The Sun, he called the behavior for which two staff members have already been disciplined “disappointing and unacceptable”.

“Unfortunately, there are some employees who have been too friendly to the national team,” Lauritsen wrote.

“I had not thought this could take place in my wildest imagination.

“I have to remind you that we always act professionally, and do not socialize with the players privately in guest areas or in the rooms,” he demanded.

Separately to Danish magazine Se og Hor, Lauritsen confirmed that he “had to reprimand two staff members who did not comply with our personnel policy”.

“I always have ongoing contact with the Danish FA, and of course we have discussed this.”

“I have been told that the women were in one pool while the players were in another, and the two groups gathered in one.”

“This is not going to work,” he added.

Thankfully for the Danes, the alleged pool party did not have a negative impact on the players’ performance.

Winning 4-0 in Moldova, they then sneaked a 1-0 victory over Austria at Parken Stadium in Copenhagen on Tuesday which sealed qualification for Qatar 2022 and was celebrated by pouring champagne on manager Kasper Hjulmand.

With the Danish FA’s investigation ongoing, it is unknown who the players were in the team that allegedly mingled with the female staff, in a squad that contains Premier League stars such as Andreas Christensen, Pierre-Emile Hojbjerg and Kasper Schmeichel.

How AI is helping to make breast cancer history