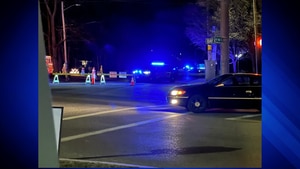 Sharon police are investigating after a pedestrian was fatally struck by a vehicle Monday night.

According to the Sharon Police Department, officers responded to the area of North Main Street and Bay Berry drive at 8:43 p.m.

Police erected barricades at opposite ends of the road. Traffic will be detoured at Cobb Corner and in the area of Canton Street and North Main Street for the next few hours while investigators work.

Police have not yet identified the victim.