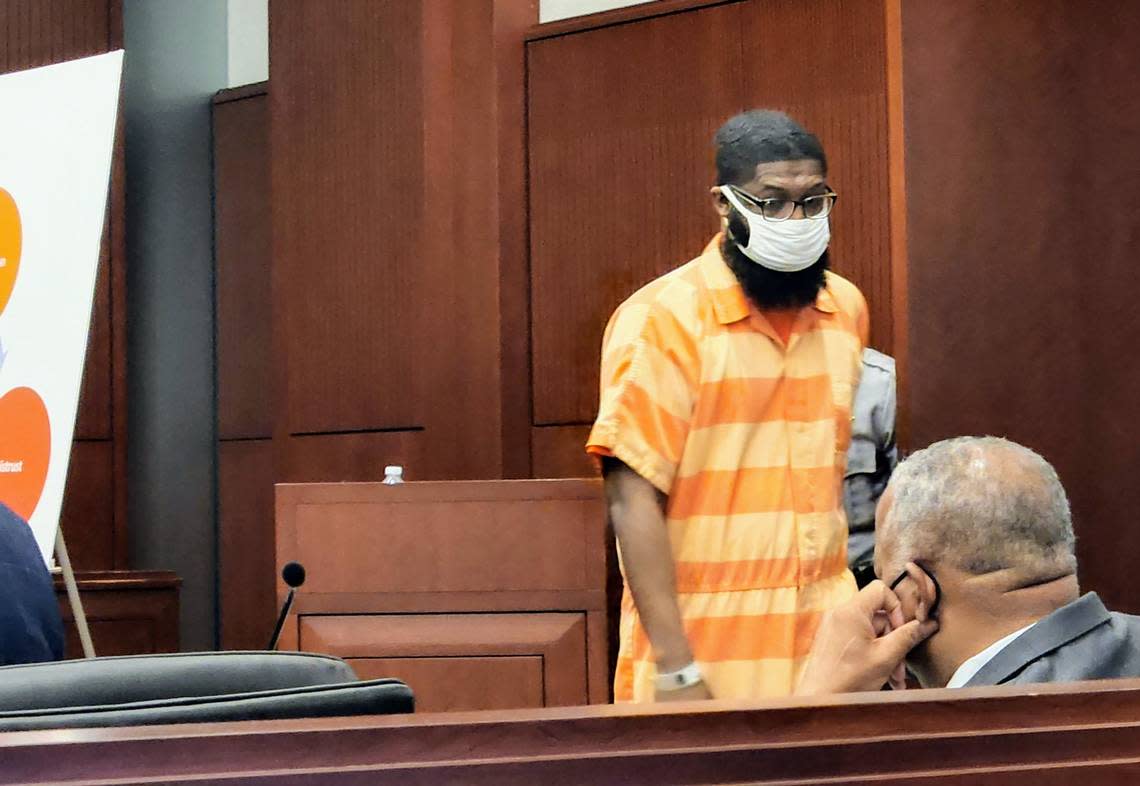 A North Carolina civil rights group is weighing in on a Wake County death penalty case, arguing that a standard method of selecting jurors will exclude Black people, women and Catholics from considering the case.

Hill is one of two men who could face the death penalty for the 2016 slaying of a pregnant April Holland and Dwayne Garvey at the former America’s Best Value Inn near Crabtree Valley Mall.

In 2019, a Wake County jury found Seaga Gillard guilty of two counts of first-degree murder in the killings and sentenced him to death.

The jury found Gillard guilty of the double homicide after a trial in which prosecutors showed jurors the shooting, which was captured on video. Prosecutors said the men sought out Holland’s prostitution services, but ended up killing her and her boyfriend, who had three children together. Holland was four months pregnant.

The women expected a single customer, but two men came to their door, tied them up, robbed and sexually assaulted them, they testified.

How it currently works

In Gillard’s and other capital cases in North Carolina, prosecutors strike prospective jurors whose opposition to the death penalty prevents them from being able to sentence someone to death.

A general opposition to the death penalty isn’t enough, according to North Carolina Superior Court Judges’ Bench Book, a resource for judges put together by the UNC School of Government staff.

However, when jurors’ beliefs would substantially limit their ability to follow a judge’s instructions during a capital sentencing hearing or prevent them from fairly considering the imposition of a death sentence, “the juror must be excused,” the book states.

The N.C. Supreme Court in 1992 rejected the argument that juries selected under the current standard are more inclined to convict than a jury that has not been death qualified, the book states. In 1986 the U.S. Supreme Court held the practice, known as death qualification, doesn’t violate a defendant’s right to an impartial jury.

Over a two-day hearing on Aug. 29 and Sept. 1, American Civil Liberties Union of North Carolina attorneys Henderson Hill and Brian Stull presented evidence on Hill’s behalf to argue the current practice is discriminatory and violates Hill’s rights to a fair trial, as well as some community members’ right to serve on Hill’s jury.

The hearing is likely to resume Monday or Tuesday, depending on when the parties decide to start jury selection, as well as fit in other pretrial hearings.

It’s unlikely that Judge Paul Ridgeway would rule against existing law and precedent, but the hearing does create the opportunity for ACLU attorneys to get their anti-death penalty arguments before the Supreme Court if Hill is convicted of murder and sentenced to death.

The witnesses in the ongoing pretrial hearing included national experts who discussed the history of racial discrimination in the criminal justice system and related traumatization of Black people following lynchings and disparate death penalty outcomes.

The experts also discussed how polling shows a general decline in support for the death penalty for people convicted of murder, from 79% in 1988 to 54% in 2021.

It also found that women and religious people were excluded at a higher rate.

The study, which focused on Black and white potential jurors, showed that in the 10 cases, there were 1,027 jurors of those races considered.

Of the 979 white people, 111 or 11% were removed due to their stance on the death penalty, the study found.

In those 10 cases, two of the juries had no Black people and four had one Black person.

Mona Lynch, a criminology professor at University of California, Irvine, testified about mock jury studies that compared juries whose members all said they could sentence someone to death to juries that included individuals with mixed views on the death penalty.

Another study found that if at least one Black man was on an actual jury, it was less likely to sentence someone to death

“The research is very strong that Black defendants are going to suffer as a result of having disproportionate exclusion,” she said.

In general, North Carolina death sentences have dropped significantly since the 1990s, when juries sentenced between 20 and 34 people to death annually, according to the Death Penalty Information Center. Since 2007, from zero to fewer than five people have been sentenced to death each year.

The last North Carolina execution occurred in 2006, as litigation over the state’s method of lethal injection and other issues halted state killings.

Wake County District Attorney Lorrin Freeman has been criticized by criminal justice reform advocates for continuing to seek the death penalty in a system they say is flawed and disproportionately affects the poor and Black people.

Freeman won’t pledge to not seek the death penalty, she has said, because she wants to be able to discuss that option with families whose loves ones have been murdered. Freeman declined to comment Friday as the judge is considering the motion.

Earlier this year, the ACLU of North Carolina launched a campaign to educate voters on issues, including Freeman’s use of the death penalty, before the May Democratic primary for Wake district attorney. Freeman won 59% of the vote against challenger Damon Chetson, a defense attorney who pledged not to seek the death penalty.