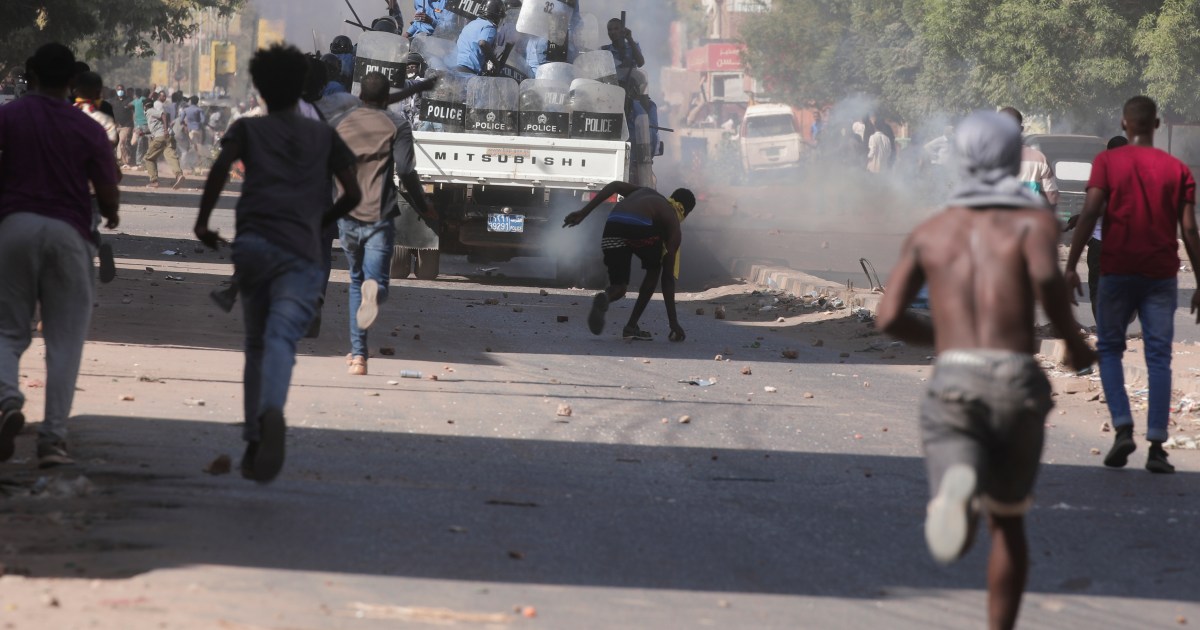 Day after 15 people were killed, demonstrators man makeshift barricades in Khartoum in protest against the military takeover.

Sudanese security forces have fired tear gas at anti-coup protesters who had stayed on the streets of northern Khartoum a day after 15 people were killed, witnesses said.

The Sudanese military, led by al-Burhan, seized power, dissolving the transitional government arresting dozens of civilian officials and politicians, and declaring a state of emergency.

The takeover upended a fragile planned transition to democratic rule, more than two years after a popular uprising forced the removal of longtime leader Omar al-Bashir.

Al-Burhan insists the military’s move “was not a coup” but a step to “rectify the course of the transition” to civilian rule.

Thousands took to the streets on Wednesday in Khartoum and other cities but were met by the deadliest crackdown since the coup.

At least 15 people, mostly from northern Khartoum, were killed on Wednesday alone, according to medics, raising the death toll of protesters to 39 in recent weeks.

“We condemn violence towards peaceful protesters and call for the respect and protection of human rights in Sudan,” said the US State Department’s Bureau of African Affairs on Twitter on Wednesday.

Wednesday’s demonstrations were organised despite a near-total shutdown of internet services and disruption of telephone lines across Sudan.

In a statement, the Central Committee of Sudanese Doctors (CCSD) said security forces “used live bullets heavily in different areas of the capital” and that there are “tens of gunshot injuries, some of them in serious condition”.

Bridges connecting the capital with its neighbouring cities reopened and traffic again flowed through many streets in Khartoum.

Security forces were seen removing makeshift barricades of bricks and rocks from some streets in eastern and northern Khartoum, said a correspondent of the AFP news agency.

The military takeover sparked a chorus of international condemnation, including punitive aid cuts, with world powers demanding a swift return to civilian rule.

The United States has suspended some $700m in assistance to Sudan in response to the coup.

Demonstrators have rallied since, despite internet outages and disruptions of communication lines, which forced activists to disseminate calls for protests via graffiti and SMS messages.

Since last month’s coup, more than 100 government officials and political leaders, along with a large number of demonstrators and activists, have been arrested.

Pro-democracy groups have promised to continue protesting until the return of the last Sovereign Council.

In an interview with Al Jazeera earlier this month, al-Burhan said he was committed to handing over power to a civilian government, promising not to participate in any government that comes after the transitional period. But last week he announced himself as head of the new Sovereign Council.

Al Jazeera English is a television news channel broadcast to the world by the Al Jazeera Media Network.