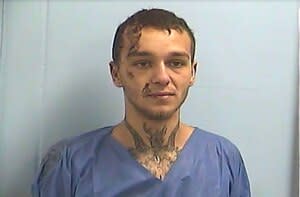 A police chase through Dawson and Hall counties earlier this week started with an assault at a Waffle House and ended with a crash at a church.

Dawson County Sheriff Jeff Johnson says that Zackery Miller, 22, hit a man in the head with a machete in the parking lot of a Waffle House on Center Lane in Dawsonville at 10 p.m. on Monday night. The man who was assaulted was not injured.

Johnson says that after assaulting the man, Miller stole a motorcycle and led deputies who spotted him on a high-speed chase.

The chase ended on Price Road in Hall County when Miller crashed the motorcycle near a church.

When deputies searched Miller after the crash, they found crushed pills they believe to alprazolam and three baggies of methamphetamine that also contained what they suspect was fentanyl.

Miller was taken to the Dawson County Jail and charged with armed robbery, aggravated assault, possession of a controlled substance with the intent to distribute, possession of tools for the commission of a crime, fleeing and eluding a police officer and DUI of drugs.