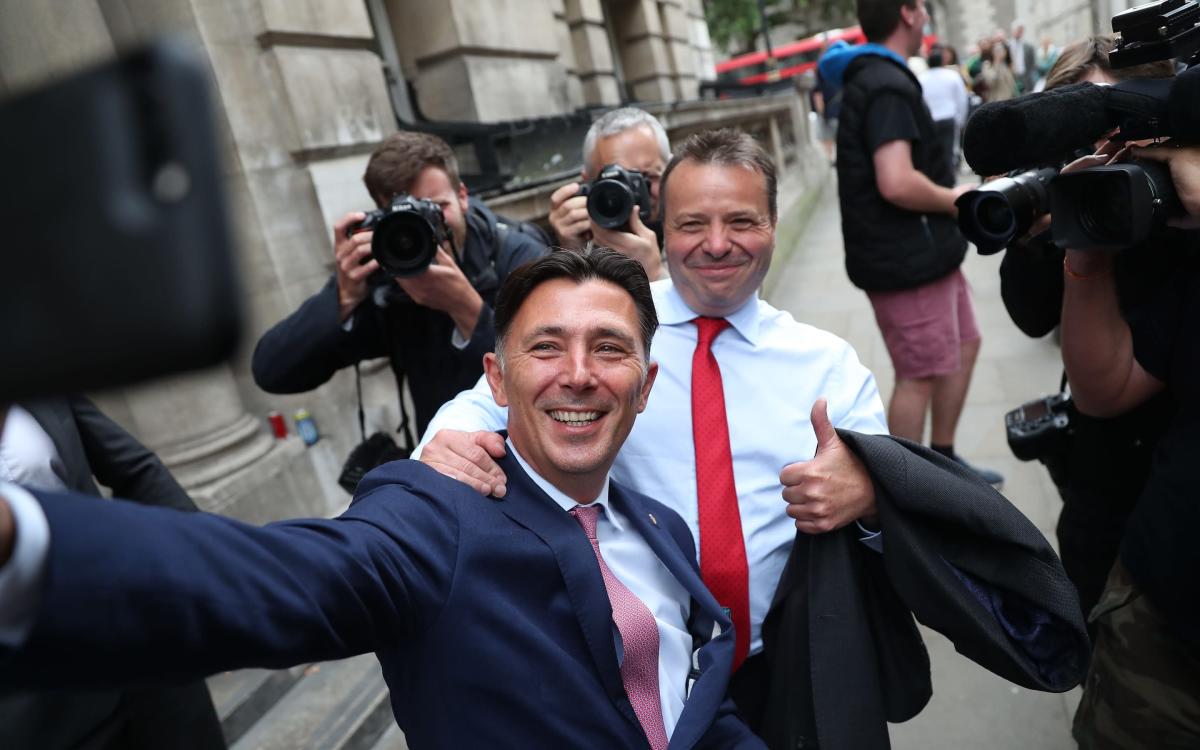 The Bad Boys of Brexit are back! Arron Banks and Andy Wigmore have been hir…

The Bad Boys of Brexit are back! Arron Banks and Andy Wigmore have been hired by New Zealand’s version of the UK Independence Party to help fight September’s general election in a move bound to infuriate their Left-wing critics.

A team from Mr Banks’ Leave.EU campaign is advising Winston Peters’ New Zealand First party on its social media campaign in a deal said to be worth a six figure sum.

It comes just nine months after Mr Banks was cleared of any criminality by the National Crime Agency over £8 million in EU referendum campaign funding.

Mr Banks, with Mr Wigmore, published a diary called The Bad Boys of Brexit charting their adventures during the 2016 campaign.

A six-strong team from Leave.EU have been dispatched to Auckland with an instruction to increase New Zealand First’s vote share to as high as 12 percent.

The hope is for New Zealand First to double its MPs to 20 so the party can hold the balance of power in the country’s 120-strong Parliament after the September 19 poll.

New Zealand First’s leader Winston Peters, and the country’s deputy Prime Minister, surprisingly backed Labour party leader Jacinda Adern at the general election in 2017 and the pair are said to work well together.

Mr Banks said that Ms Ardern – who he likened to “Jacinderella” with her party playing the role of “the ugly Sisters” – is being groomed for a bigger job at a supra-national body like the World Health Organisation.

He said: “Our job is to get their vote share to 11 per cent, 12 per cent, 13 per cent and then Winston holds the traditional position of king maker.”

Mr Banks continued: “We have deployed our top social media team and data experts to do all the creative work, Andy and I are giving Winston strategic advice.”

He added: “Since 2016 we have known Winston, he is a huge supporter of the Commonwealth and watched first hand the referendum campaign.

“He’s always been a more seasoned version of Farage with massive government experience. “He is one of very few current politicians that speaks fluent human and can relate to anyone, he’s in the same mould as Boris they speak truth on behalf of the ordinary people. He is always on the side of the people.

“He has studied the way social media can be a useful channel when the mainstream media want to try and cancel what you have to say.

“His strength, like Boris/Farage, is he has a direct conversation with the public and social media is the perfect platform to do precisely that. “We have deployed our top social media team and data experts to do all the creative work. Andy and I are giving Winston strategic advice.”

Mr Wigmore added: “I’m going to be on ground in New Zealand causing trouble – mischief, mayhem and guerrilla warfare in the New Zealand election – the bad boys are back.”