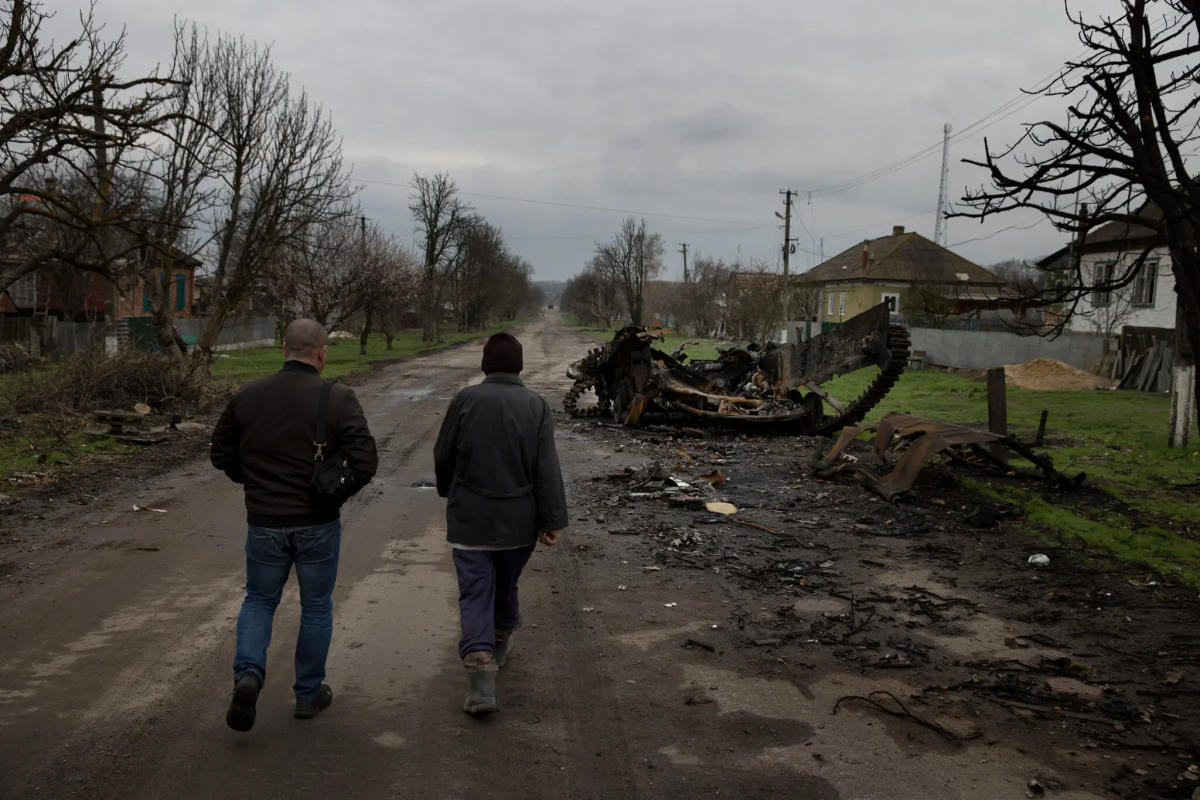 The Corpse of a Russian Soldier, and the Cold but Human Urge to Look

HUSARIVKA, Ukraine — There’s a dead guy in there.

He is charred black, almost like he had been welded inside the Russian military vehicle as it exploded.

How long had this Russian soldier been on display? Long enough to become a monument in this tiny eastern Ukraine village, Husarivka, where some people walked by in the cold spring rain, knowing they were passing by a tomb.

The Russians, by that point in April, had been gone from the area for around two weeks, the evidence of their retreat scattered across the roads and fields — mixed with bullet-riddled civilian vehicles and hastily dug backyard graves.

The two weeks was just long enough for the 400 or so remaining residents to take stock of what, exactly, had happened to them since the end of February: the war, the occupation, the battle to retake their village, their own losses, and the body left behind inside the destroyed armored vehicle.

He was burned so badly I couldn’t tell how old he was, but I figured he must be young because he was sitting in the troop compartment: the back of the armored personnel carrier where a half dozen or so guys typically crouch holding their rifles, waiting for some older officer to tell them to get out and attack or defend.

Maybe he had been sitting there listening to the shooting outside the thin armor of his vehicle, known as a BMP, that, a few moments later, did precisely nothing to stop the projectile that splayed the whole thing open like a can.

But two weeks later still he sits, his last thoughts gone from his skull, cracked open and wet from the rain.

If he had been a general, his troops might have tried to grab him, to pry him out of the wreck as it burned.

The Russians have abandoned the bodies of many of their troops, a startling practice that flouts a common code among combatants. Does it signal disarray? Low morale? Or was it, in this case, something more personal?

Maybe if he had been popular in the platoon, the guy who picked you up from the bar at 4 a.m. no questions asked, they would have fought to put out the flames. Or at least to get his body, so he could be buried under a familiar sky.

Or maybe it was so catastrophic that by the time the survivors made it to safety and looked around and realized, good God, he’s missing, they knew there was nothing they could do. He was still in there. Trapped.

I’m looking at him, thinking about all this, trying to figure out if that’s his rib cage, listening to the artillery in the distance and wondering if it’s getting closer or farther away.

Husarivka was a speed bump in a Russian advance that failed, leaving the village of dairy farms, and little else, briefly occupied by Russian soldiers — and saturated with Ukrainian artillery fire in response — until the Ukrainians advanced at the end of March.

Presumably, that was when the BMP was destroyed. Now the front line was just miles away, and we were there doing the same thing as Husarivka’s residents: taking stock of the wreckage and the loss.

As has become a depressing attribute in modern wars, there is a lot of statistical talk about casualties and killing in this one, as if the violence had become so routine and mechanical, so quickly, that the numbers of the dead and wounded can be pored over like sports scores.

For the people in Russia and Ukraine, those faceless numbers only glanced at by the rest of the world are mothers, sons, friends. Their empty rooms will have to be repainted and refurnished, or left undisturbed, awaiting a return that will never come.

And for those actually living through all this destruction and the killing, the detritus of battle carries its own allure after the shooting has stopped and the air raid sirens have gone silent. Inevitably, the scorched remains of destroyed tanks and other vehicles are surrounded by voyeurs wondering about the fate of those doomed crews; trying to piece together those final moments or staring in awe at what people are capable of doing to one another.

This urge to gawk at the unspoken parts of war reminded me of my second deployment as a Marine in southern Afghanistan in 2010, where there was plenty of killing and dying but not on a scale comparable to Ukraine.

A wounded Taliban fighter — or a man who the platoon said was a Taliban fighter — had been taken to our outpost of about 50 people so he could get evacuated for treatment. The Talib was shot up pretty badly, bandaged but clinging to life.

Everyone in the outpost wanted to see him. They stopped what they were doing, crowded around the stretcher and looked at this man slowly dying. Just to see it, to experience it. They walked beside him after the helicopters landed and saw him off and then went back to their jobs.

Maybe it was a kind of comfort, the ultimate reminder: He was on that stretcher, and they, in that moment, were not.

In Ukraine, the twisted hulks of destroyed tanks and other Russian military vehicles put on display in Kyiv, the capital, have attracted crowds. The young and the old have likely been drawn there for many of the same reasons as my comrades in Afghanistan were more than a decade ago, though the Ukrainians have the added vindication that comes with resisting an occupier — and moral distance from partaking in the violence themselves.

This wartime wanting to look — at wreckage, at the wounded and even at the dead — feels almost inevitable, something you have to do to make sure it all really happened. But I’m in no position to judge.

There I was a few weeks ago, staring at this dead Russian soldier in eastern Ukraine, peering into his tomb of tangled metal and shell casings and what was left of his incinerated body, summoned by a simple statement.

There’s a dead guy in there. 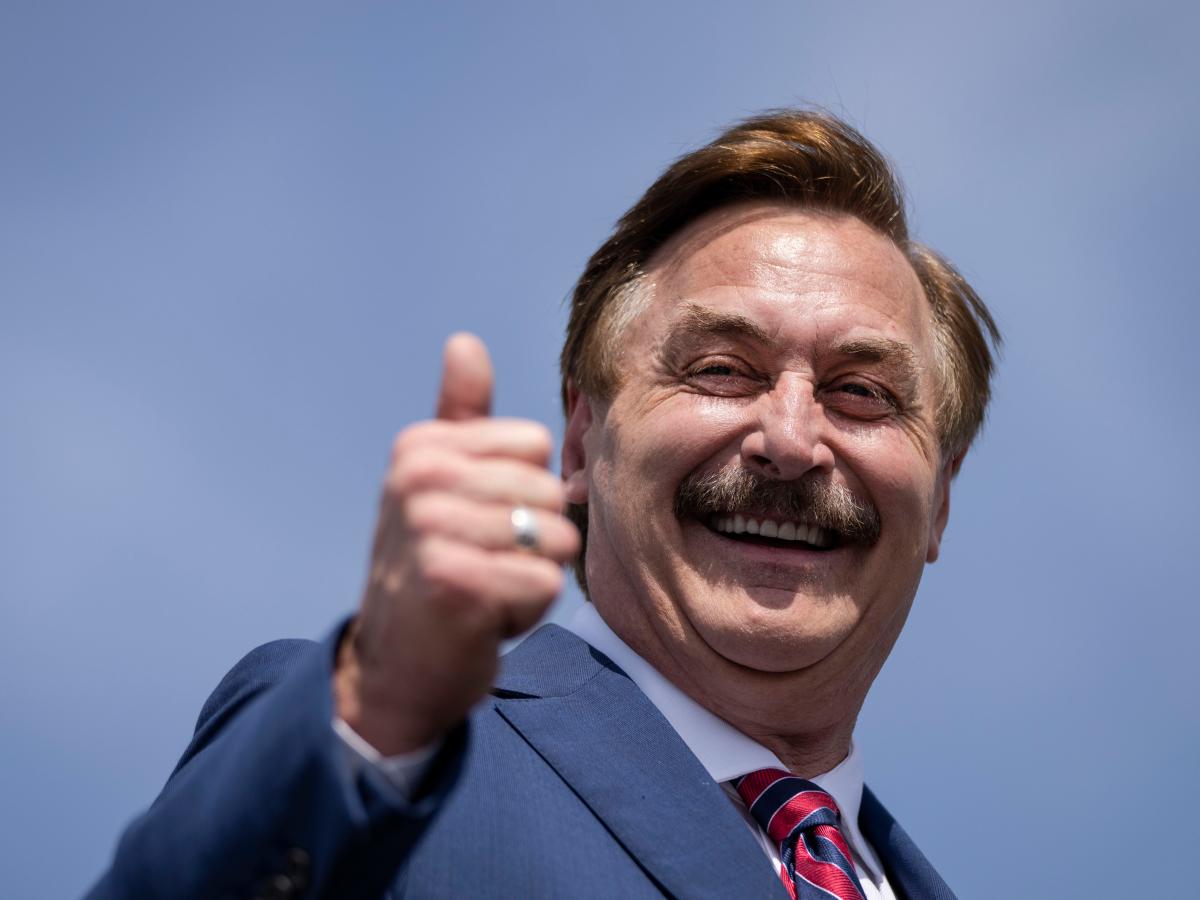 A single email domain links a vast network of palaces, yachts, wineries, an…