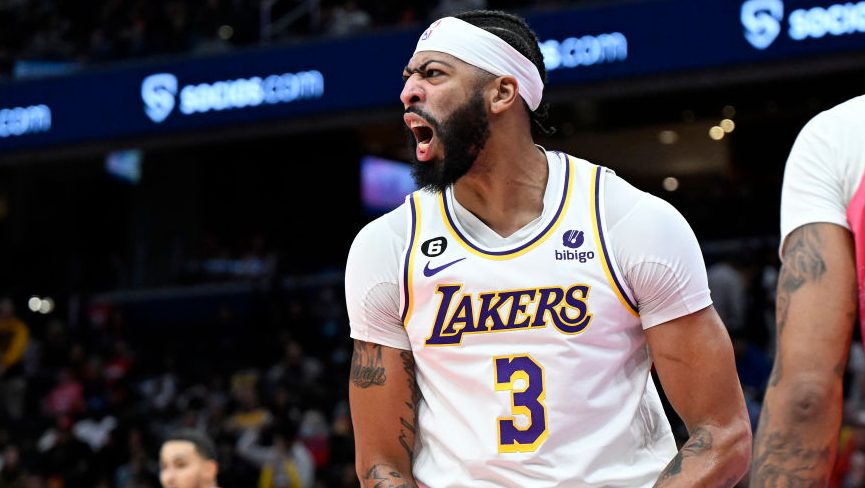 Three Things is NBC’s five-days-a-week wrap-up of the night before in the NBA. Check out NBCSports.com every weekday morning to catch up on what you missed the night before plus the rumors, drama, and dunks that make the NBA must-watch.

“This is not going to work without AD. No disrespect to Bron, no disrespect to Russ. They’re going to be who they are… but AD, having AD available…. it’s going to be invaluable. He’s the centerpiece to that championship table we’re trying to build.” —Lakers coach Darvin Ham before NBA training camps opened.

This is what Darvin Ham envisioned.

In his last five games, Anthony Davis is averaging 35.6 points on 66.7% shooting with 13.4 rebounds and 3.2 blocks a game. He has been dominant — and his 55-point game leading the Lakers to a win over the Wizards on Sunday put him in historic company.

What Ham envisioned was more than just Davis playing the five and going back to an All-NBA — if you ask Patrick Beverley or Kristaps Porzingis after the game, MVP — level, it’s that the rest of the team would follow.

So far it has. In its last 11 games, the Lakers are 8-3 with the third-best offense in the NBA and a top-10 defense over that stretch, with a +7.2 net rating. What’s more, the shooting woes that dragged them down early in the season have also righted themselves.

LAL, who started the season so cold from the perimeter, are shooting 37.1% from 3 in the last 10 games, led by:

This hot streak started against a soft part of the schedule, but road wins over the Bucks and Wizards show it isn’t a fluke. This is a team gaining confidence, and while it likely will not sustain this level of success for the remaining five months of the season, it’s a sign of what this team is capable of when clicking.

Los Angeles also still has a lot of work to do. Even with this recent run they are 10-12 and sit 12th in the West — they have to keep this going long enough to get into the playoff mix. Then we can discuss what kind of postseason threat they are.

Two Wizards notes out of their loss to the Lakers Sunday.

First, Bradley Beal left the game in the first quarter with hamstring tightness. He did not return and after the game there wasn’t much of an update on whether he will miss time, and if so how much. It’s not a good sign for a Wizards team without much margin for error.

Also, Daniel Gafford had maybe the dunk of the year. This is insane.

With Damian Lillard sidelined by a strained calf, the Trail Blazers dropped 7-of-8 and fell to .500 on the season (11-11). They were not the same team.

Sunday he returned — looking unbothered by any calf issue — and suddenly the ball was moving again, and the offense clicking in a win over the Pacers. Lillard was 5-of-10 from 3 on his way to 21 points, but just his presence opened up the offense so Jerami Grant could score 28. Anfernee Simons, coming off his insane 45-point night, added 22.

Lillard doesn’t have to carry Portland, he doesn’t have to drop 40 every night to have a chance to win (see Doncic, Luka). Grant and Simons can help carry the scoring load. But this is also a team without much margin for error, so they struggle without the threat of Lillard, the floor shrinks and the ball doesn’t move the same way.

3) Does he have a puncher’s chance? Floyd Mayweather wants to buy NBA team

The instinct is to bet against Floyd Mayweather ever owning an NBA team for a couple of reasons, but when you’re talking about a boxer with a 50-0 career record, bet against him at your own risk.

Mayweather said at a recent public event he was working to buy an NBA team and has made a $2 billion offer for one.

“It could be the Vegas franchise. It could be the Seattle franchise or I could be buying a franchise that’s already up and running. So the first offer, we offered them a little over $2 billion for majority ownership. Do I have it? Absolutely, I have it, but it didn’t happen overnight. It didn’t happen overnight. It’s a lot when you have so many different businesses all around the world. It’s a lot.”

There are two key questions about Mayweather’s being able to purchase an NBA team.

The first is, does he really have the money? Mayweather says he does, and last year said his net worth was above $1.2 billion. Whether that is true, and whether that money is liquid or if it’s tied up in speculative investments, is not something we know (it’s not like Mayweather has to make his financial situation public). However, you can be sure it’s something the NBA would have its accountants look into — Mayweather would have to open his books to them to get into the club.

The second issue is Mayweather’s history of controversies — including homophobic comments and pleading guilty to domestic violence charges. The NBA vets its owners looking to avoid public relations blowback, and you can be sure a Mayweather ownership would lead to a lot of hard questions for a league that paints itself as progressive.

Even if he has the $2 billion and the league approves him, Mayweather will need partners in this process. The only NBA team publicly known to be for sale is the Phoenix Suns and the sale price for that may be double the $2 billion number Mayweather threw out. As for potential expansion teams (probably headed to Seattle and Las Vegas), those are years away according to league sources (think the second half of this decade), and the entry price to get into those is going to be well above $2 billion.

BONUS THING TO KNOW: Jose Alvarado put up a 38-spot for the Pelicans and had the New Orleans fans singing his name.