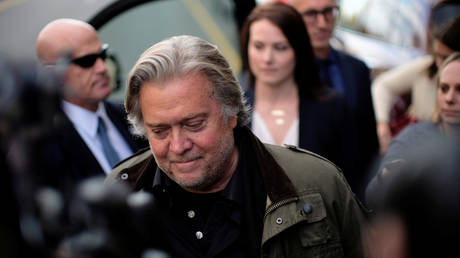 Former Trump official Steve Bannon will be held in criminal contempt of Congress, much to the glee of his critics, after refusing to comply with a subpoena order from the January 6 House committee.

Bannon’s lawyer had previously announced that his client was not going to comply with the order, one of a handful sent to top Trump allies over the January 6 Capitol riot.

“Mr. Bannon has declined to cooperate with the Select Committee and is instead hiding behind the former president’s insufficient, blanket, and vague statements regarding privileges he has purported to invoke. We reject his position entirely,” Thompson said.

The committee will convene on Tuesday to discuss “adopting a contempt report.”

An update was provided by a committee aide on others who have been subpoenaed and whose appearances have been delayed.

The Jan. 6 committee “has agreed to short postponements of Mr. Patel’s and Mr. Meadows’s appearances as they continue to engage with our investigation,” per a committee aide. Scavino’s deposition has been delayed given his subpoena was served later.

Bannon’s attorney had reportedly explained in communication with the committee that his client is honoring Trump’s “executive privilege.”

“We must accept his direction and honor his invocation of executive privilege,” he said.

Though Bannon’s plans were clear from the start, that did not stop his critics on social media from gleefully celebrating the thought of the controversial conservative facing legal repercussions – he could face up to a year in prison and a $10,000 fine for a criminal contempt charge, though that is highly unlikely and any contempt charge will likely be used more as an incentive to cooperate.

BREAKING NEWS: Trump aide Steve Bannon fails to appear at this morning’s January 6 Committee hearing, defying its subpoena and missing his last chance to comply before facing criminal contempt charges and jail time. RT IF YOU THINK THAT BANNON SHOULD BE CHARGED IMMEDIATELY!

Words we do want to hear today from the January 6 committee: “Bannon has been arrested.” https://t.co/kWkRlJS6bH

Contempt. That’s what I feel for Steve Bannon.

And bonus: That’s what he’ll be charged with by the new Department of Justice. Win!

Committee member Rep. Jamie Raskin (D-Maryland) promised that Bannon would face “the full force of the law for the smirking contempt he is showing Congress.”

It’s official. Steve Bannon has violated a congressional subpoena and missed his opportunity—w/o jail time or court order—to come clean about the Jan. 6 insurrection. He will face the full force of the law for the smirking contempt he is showing Congress and the American people.

Trump has encouraged non-cooperation with the committee, which he has blasted as a partisan effort to keep January 6 in conversation. He has called on the committee multiple times to instead investigate the 2020 presidential election, which he continues to maintain was fraudulent.