Trump vs. DeSantis: How the two GOP heavyweights match up 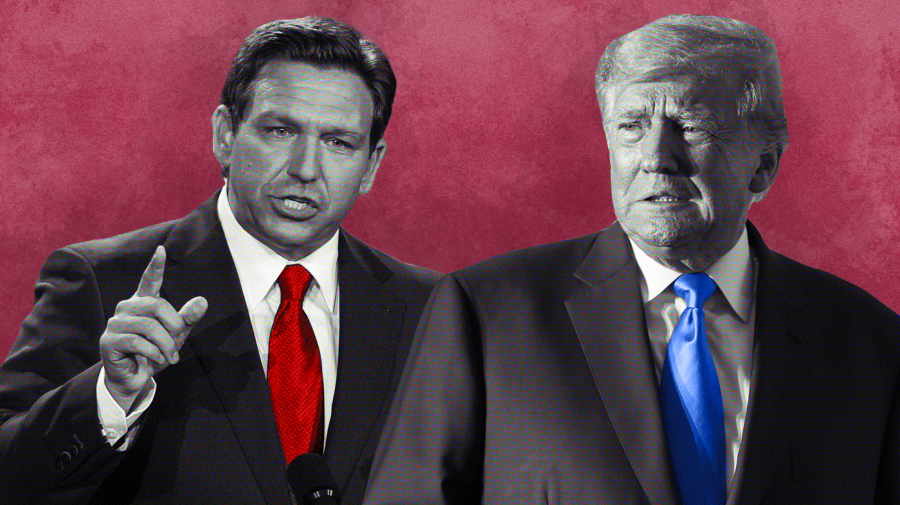 Two years out from the next presidential election, the leading contenders on the Republican side are already clear.

Trump launched his 2024 campaign at Mar-A-Lago on Tuesday. He is aiming to avenge his 2020 defeat and become the first president since Grover Cleveland to serve non-consecutive terms.

DeSantis won a resounding victory in his re-election battle on Election Day, crushing his Democratic opponent Charlie Crist by about 20 points. The result sent a powerful signal about his likely electability in 2024.

There is one obvious difference between the two. DeSantis has not yet said he will seek the presidency.

If he does, he would plainly be Trump’s most serious rival.

How do Trump and DeSantis match up in key areas?

Speculation about a possible Trump-DeSantis contest has been building for months.

Polls before the midterms almost always showed the former president leading — often by a wide margin — among Republican voters.

There were exceptions to that pattern but they were so rare as to be noteworthy, as when DeSantis edged ahead of Trump in a poll of likely New Hampshire Republican Primary voters back in June.

The midterms have changed everything — at least for the moment.

DeSantis has been catapulted past Trump in several polls after Trump suffered a poor outcome in the midterms.

The popularity shift from Trump to DeSantis was especially stark in several polls commissioned in early primary states by the conservative Club for Growth.

A poll in Iowa put DeSantis 11 points clear of Trump, a marked turnaround from a similar poll in August when the Florida governor had been behind by 15 points.

In the most recent poll in New Hampshire, DeSantis led by around 15 points, despite the two candidates having been tied in August.

An Economist/YouGov poll this week indicated that 46 percent of Republican voters would prefer DeSantis to be the nominee, compared to 39 percent who would favor Trump.

The Economist poll also exposed Trump’s Achilles’ Heel: the sheer number of people who dislike him.

When respondents in the poll were asked whether they had favorable or unfavorable views of various politicians, both Trump and DeSantis hit exactly the same number of Americans with a favorable view: 41 percent. But whereas 37 percent had an unfavorable view of DeSantis, the number viewing Trump unfavorably was much higher, at 52 percent.

The same pattern held among Republican and conservative voters. Among self-identified conservatives, Trump’s unfavorable number was almost twice as high as DeSantis’s — 25 percent to 14 percent.

It is, of course, possible that DeSantis is at a high-water mark — and Trump at a low ebb — right now.

But based on polling alone, Trump is no longer the favorite.

When it comes to the money race, only one thing seems clear — both Trump and DeSantis will have all the cash they need to be competitive.

Trump’s current total war-chest is estimated at around $100 million. DeSantis is coming off one of the most lavishly funded gubernatorial campaigns in history and has around $90 million to draw on.

Both men have raised money primarily through political action committees (PACs) rather than their actual campaigns.

OpenSecrets, a website that tracks money in politics, noted in mid-September that DeSantis had by then raised $31.4 million directly through his campaign but an additional $146 million in his state-level PAC, Friends of Ron DeSantis.

Trump’s main fundraising vehicle so far has been the Save America PAC.

Trump, having declared his candidacy, is now subject to somewhat tighter limits, including a contribution cap for donors giving directly to his campaign.

In theory, campaign-related activities need to be funded from the campaign account rather than being underwritten by the PAC — but in practice that distinction can be too fuzzy for the liking of many ethical watchdogs.

There’s one other aspect to the money battle — the recent ostentatious show of coldness by some big GOP donors toward Trump.

As a practical matter, though, Trump’s massive popularity with his base likely means he can be assured of a continuing gush of small-dollar donations, reducing any dependence upon mega-donors.

Virtually no-one expects a Trump-DeSantis primary, if it happens, to be contested on the finer points of policy.

Such a race would be very different from the standard template of intraparty fights where a hardliner runs against a moderate. Both Trump and DeSantis are aligned with the populist, culture-war-loving right rather than the old and diminished GOP establishment.

Trump has never been tied to consistency, having been pro-choice on the abortion question before he entered politics and, even while president, doing a 180 on crucial issues like North Korea.

In 2017, Trump derided North Korean leader Kim Jong-Un as “rocket man” and threatened to “totally destroy” the country. The following year Trump would joke that he and Kim “fell in love” after exchanging letters.

DeSantis, for his part, is best known on a national level for the flights of migrants he organized to Martha’s Vineyard, Mass., and for his support for legislation restricting the teaching of sexuality in schools. The latter controversy also led to a feud with the Walt Disney Company.

After winning re-election, DeSantis boasted in his victory speech that Florida was “where woke goes to die” — the kind of phrase Trump might rue he did not coin first.

Conservative writer Jim Geraghty argued this week in the Washington Post that DeSantis has “the policy goals of a traditional conservative Republican, not the cobbled-together agenda that typified the Trump years.”

But on the issues that most animate the Republican primary electorate — vehement opposition to President Biden and the Democrats, immigration, crime and the economy — there is precious little basis for differentiating Trump and DeSantis.

Their primary, if it happens, will likely come down to who can fire up the base more effectively — and who can persuade the GOP they can win in 2024.

Death toll from gas tank explosion in Iraq rises to 15

DOHA, Qatar (AP) Four Uruguay players were charged with offensive behavior by FIFA on Monday for their angry pursuit of...