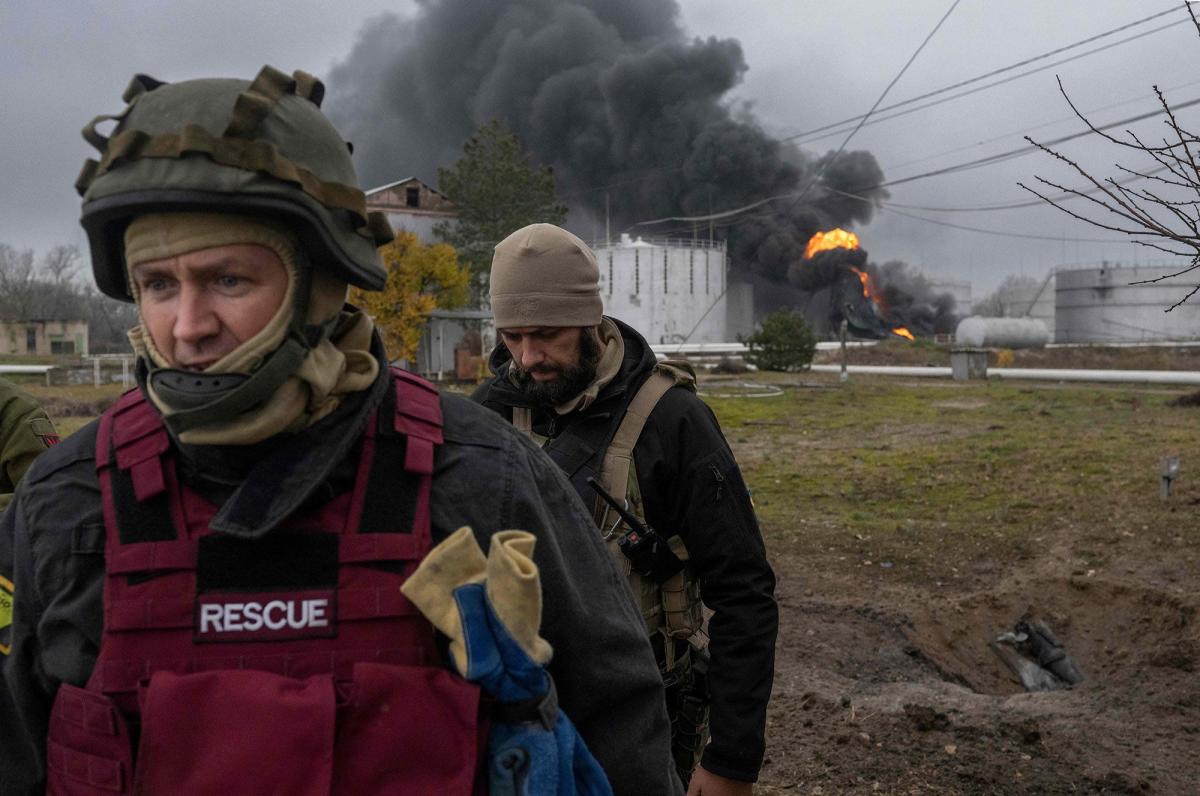 (Bloomberg) — Vladimir Putin’s administration said he remains open to negotiations after President Joe Biden raised the prospect of talks if the Russian leader is committed to ending the war. Putin spoke with Olaf Scholz for an hour on Friday during which the German chancellor pushed for a diplomatic solution. The leaders of Turkey and the UK also talked about ways to re-establish grounds for negotiation between Kyiv and Moscow.

Still, the Kremlin said Putin has no plans to end Moscow’s military campaign in Ukraine. French leader Emmanuel Macron said at a White House news conference with Biden on Thursday that the timing and terms of negotiations to end Russia’s war must be up to Ukraine.

Nuclear monitors are closing in on an agreement between Ukraine and Russia that would set up a security zone around Europe’s largest atomic energy plant, the head of the International Atomic Energy Agency told Bloomberg.

Ukrainian troops continue to stem Russian attacks along the front line in the eastern Luhansk and Donetsk regions, while the main effort of the Kremlin’s troops remains centered on trying to advance in the Bakhmut area, according to Ukraine’s General Staff. Russian forces launched five rocket attacks against civilian infrastructure in the eastern Kharkiv and Donetsk regions over the past 24 hours, as well as 30 air strikes on troop positions and more than 35 assaults with multiple launch rocket systems on populated areas. Russian forces shelled the city of Zaporizhzhia overnight, causing a fire at an industrial facility, regional Governor Oleksandr Starukh said on Telegram.

International monitors getting closer to an agreement between Ukraine and Russia that would set up a security zone around Europe’s largest atomic energy plant, potentially easing concerns about an accident. Rafael Mariano Grossi, director general of the International Atomic Energy Agency, told Bloomberg TV that the sides are nearing a deal.

IAEA monitors are at the Zaporizhzhia nuclear power plant, whose six reactors are shut down after months of attack, while Grossi tries to convince Kyiv and Moscow to cease military activities around the facility.

“We are getting closer to something that could be acceptable,” Grossi said in an interview. The Argentine diplomat said he expects to sit down separately with Ukraine President Volodymyr Zelenskiy and his Russian counterpart, Vladimir Putin, in the near future to push negotiations forward.

The European Union agreed to put a price cap on Russian oil at $60 a barrel, paving the way for a wider Group of Seven deal, according to a Polish diplomat.

The price is higher than where Russia already sells most of its crude. That’s because one of the main aims of the measure is to try to keep Russian oil flowing to global markets. But it’s less generous than an earlier proposal after pressure from Poland and the Baltic countries.

The discussion also touched on the war in Ukraine. Erdogan also said it was in the region’s best interest to re-establish grounds for negotiation between Moscow and Kyiv.

Ukraine’s government is holding special road-shows in Europe and the US to garner support for a special international tribunal for Russia’s crimes of aggression after Kremlin-led forces invaded in February.

Meetings are planned for Berlin, Washington and London and have already taken place in Paris, according to President Volodymyr Zelenskiy’s office. A special working group, led by his chief of staff Andriy Yermak, is doing the groundwork on a legal and political basis for the tribunal.

The International Criminal Court, founded in 2002, lacks the necessary powers and investigates specific war crimes, allowing punishment of direct perpetrators and possibly their direct commanders, but not high officials.

Russia’s flagship crude oil rallied to just above $50 a barrel on Thursday, but remained well below the level at which the European Union may soon try to cap it.

European Union negotiators are closing in on setting a maximum price of $60 a barrel for companies that want to access the bloc’s vital shipping and services including insurance. Urals has been below that level for 10 days.

Putin discussed the situation in Ukraine on Friday with German Chancellor Olaf Scholz, the Kremlin said. Germany said Scholz “pushed for a diplomatic solution” in the hour-long call.

The discussion was initiated by Germany, according to the Kremlin. Putin decried what he termed “the destructive policy” of western countries, including Germany, by supplying weapons to and training the Ukrainian military.

The pair also discussed the Black Sea grain initiative and unblocking exports of food and fertilizers from Russia.

The government is also in talks with defense companies about making more ammunition available for the systems, he said.

Such packages arrived in Ukrainian diplomatic missions in Italy, the Netherlands, Poland, the Czech Republic, Hungary and Croatia. The entrance of the Ukrainian embassy at the Vatican was vandalized, while the embassy in Kazakhstan received a fake bomb threat.

“We have reasons to believe that a well-planned campaign of terror and intimidation against embassies and consulates of Ukraine is under way,” Nikolenko wrote.

Putin Remains Open for Talks With US, Kremlin Says (11 a.m.)

While military operations continue, Putin “was and remains open for contacts for negotiations”, Dmitry Peskov, the Kremlin’s spokesman, said after President Biden’s remarks.

“Of course, the best way to achieve our interests would be through peaceful, diplomatic means,” he told reporters.

Japan is considering setting up a strategic reserve of liquefied natural gas, as the imports-dependent nation ramps up efforts to ensure it has enough of the fuel.

The proposals come as Europe looks for alternatives to Russian gas and as many nations seek to secure supplies of the fuel.

Energy-Poor Japan Could Set Up a Liquefied Natural Gas Reserve

Hungary would oppose the European Union taking out a joint loan for aid to Ukraine, Prime Minister Viktor Orban said. Instead, Hungary backs EU member states channeling the money to the nation on a bilateral basis, Orban told state radio.

Kyiv Heating May Be Disrupted Until Spring, Mayor Says (8:01 a.m.)

Kyiv may remain without heating until spring if more Russian attacks leave the capital without power for more than 24 hours amid freezing temperatures, Mayor Vitali Klitschko said. This will force the city to dump water from heating systems that will be very difficult to pump back into systems during the winter.

There are 3.5 million people in Kyiv and the 430 heating points currently set up in the city won’t be enough in the event of a major prolonged power collapse, Klitschko said at a security forum Thursday.

Oil stands to gain next year amid a broader commodity boom, with Brent likely to move back above $100 a barrel if China reopens, Neil Beveridge, senior oil analyst at Sanford C. Bernstein, told Bloomberg TV.

Russian crude production has been flat, but an EU embargo on seaborne exports and Group of Seven-led price caps are “going to have a very significant impact, potentially, on Russian shipments,” he said.

Ukrainian authorities will take measures to ban religious organizations and their leaders who are affiliated with Russia and help promote the Kremlin’s narratives, according to President Volodymyr Zelenskiy.

The decision was made during a meeting of the National Security and Defense Council on Thursday, he said in his nightly address. Among other measures, authorities will check legal grounds for the Ukrainian branch of the Russian Orthodox Church to control and use property of the Kyiv Pechersk Lavra, a historic monastery located in the center of the nation’s capital.