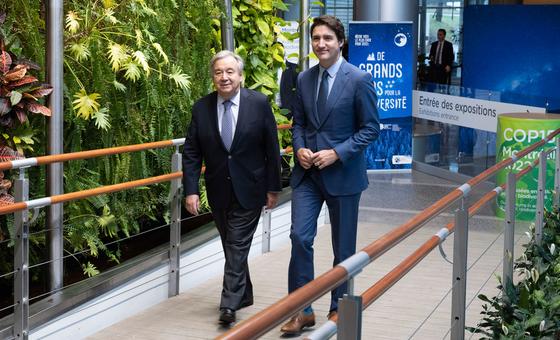 “Humanity’s war on nature is ultimately a war on ourselves.”

The UN chief was speaking on the sidelines of the conference, which is expected to set new goals for nature over the next decade.

He recalled that a million species are at risk of extinction.

“We need governments to develop ambitious national action plans that protect and preserve our natural gifts, and put our planet on a path to healing,” said Mr. Guterres.

“We need businesses and investors to put protection first in their business plans, and invest in sustainable production and extraction methods across every link of their supply chains.”

The Secretary-General stated that “climate action and protection of biodiversity are two sides of the same coin.”

He called for tough regulatory frameworks and disclosure measures that end “greenwashing” and hold the private sector accountable.

“We need developed countries to provide meaningful financial support for the countries of the Global South as custodians of the world’s natural wealth following centuries of exploitation and loss,” he said.

At the UN Biodiversity Conference (COP15) in Montreal, Canada, Secretary-General António Guterres meets with youth representatives to discuss the role of youth in supporting a just and equitable post-2020 global biodiversity framework.

Mr. Guterres also underscored the need to work side-by-side with indigenous peoples, local communities and youth, whom he called “the most effective guardians of biodiversity”.

Earlier on Wednesday, the Secretary-General met some of those guardians and listened to their concerns regarding the loss of biodiversity, as well as related issues, especially human rights.

Their testimonies “were very much in line with the principle that human rights must be at the centre of everything we do in relation to the environment and at the centre of the work of this conference,” he said.

The Secretary-General was asked about government crackdowns on environmental protests.  Expressing concern over the persecution of activists generally, he reiterated his message on the primacy of human rights.

Mr. Guterres reminded journalists that he has previously upheld the importance of guaranteeing civic space and protection of human rights defenders, which includes environmental activists.

Apple: Most iCloud data can now be end-to-end encrypted