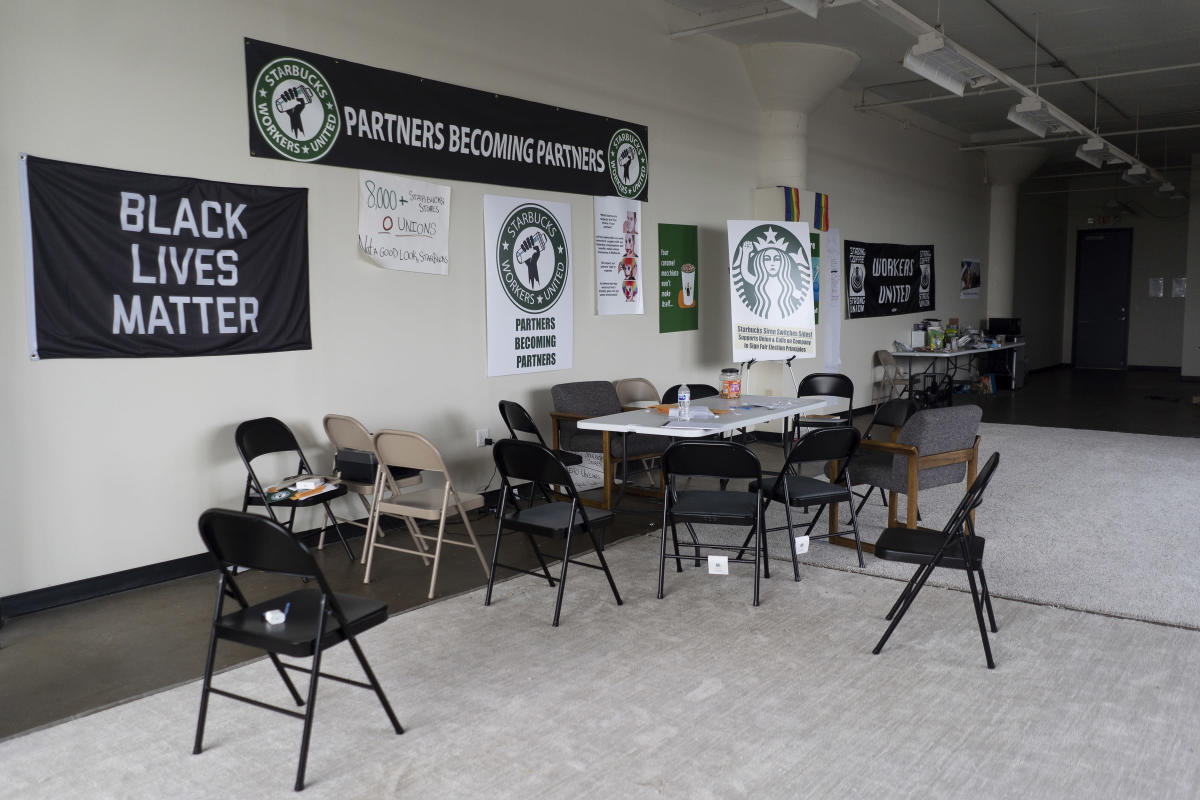 Maggie Carter, a Starbucks barista in Knoxville, Tennessee, is a warm and reassuring presence who says she is keen to “go the extra mile” for customers.

She may also be a nightmare for Starbucks executives.

As a union organizing campaign that began in Buffalo, New York, and produced the company’s only two unionized U.S. stores spreads to other cities, it is being driven by workers such as Carter: young, well educated, politically liberal.

Carter, who began circulating union cards at her store not long after the results of the Buffalo elections were announced last month, studies broadcast journalism at the University of Tennessee. She is passionate about climate change, fighting racism and labor rights. And her political hero is Sen. Bernie Sanders, I-Vt.

“Bernie Sanders is my everything,” Carter said. “I love him more than anything.”

Perhaps more disconcertingly for Starbucks as it tries to contain the union campaign, Carter appears to be representative of the kinds of people the company has hired over the years to reinforce its progressive branding.

Labor experts say that in seeking such employees, Starbucks may have built a workforce that is more inclined to unionize and to be energized by the Buffalo campaign.

“If you think about the kinds of employees they have, the stereotype of people that work there seems to be true — a lot of young people, Bernie supporters, DSA types,” said John Logan, a labor studies professor at San Francisco State University, referring to the Democratic Socialists of America. “These are the kinds of people who can take this and run with it. It could be in Knoxville and Arizona just as easily as in San Francisco and Manhattan.”

A Starbucks spokesperson, Reggie Borges, said that the company was not anti-union but “pro-partner,” as it refers to employees, and that it had historically made changes in response to input from workers, making a union unnecessary.

With more than 230,000 employees at roughly 9,000 company-operated stores across the country, Starbucks employs plenty of older workers, conservative-leaning workers and those with a high school diploma or less. Some who were heavily involved in the Buffalo campaign had never been to college.

But at least compared with other food and retail establishments, Starbucks customers tend to be liberal and well educated, and the company’s hiring appears to reflect those demographics. The company’s annual report plays up its employees as “significant contributors to our success as a global brand that leads with purpose.”

Starbucks allows employees who work at least 20 hours a week to obtain health coverage, more generous than most competitors, and has said it will increase average pay for hourly employees to nearly $17 an hour by this summer, well above the industry norm. The company also offers to pay the tuition of employees admitted to pursue an online bachelor’s degree at Arizona State University, helping it attract workers with college aspirations.

Such people, in turn, tend to be sympathetic to unions and a variety of social activism. A recent Gallup poll found that people younger than 35 or who are liberal are substantially more likely than others to support unions.

Several Starbucks workers seeking to organize unions in Buffalo; Boston; Chicago; Seattle; Knoxville; Tallahassee, Florida; and the Denver area appeared to fit this profile, saying they were either strong supporters of Sanders and other progressive politicians, had attended college or both. Most were younger than 30.

“I’ve been involved in political organizing, the Bernie Sanders campaign,” said Brick Zurek, a leader of a union campaign at a Starbucks in Chicago. “That gave me a lot of skill.” Zurek, who uses gender-neutral courtesy titles and pronouns, also said they had a bachelor’s degree.

Len Harris, who has helped lead a campaign at a Starbucks near Denver, said, “I admire the progressivism, the sense of community” of politicians such as Sanders and Rep. Alexandria Ocasio-Cortez, D-N.Y. She said that she had graduated from college and that she was awaiting admissions decisions for graduate school.

Most union supporters have drawn inspiration from their colleagues in Buffalo. Sydney Durkin and Rachel Ybarra, who are helping to organize a Starbucks in Seattle, said workers at their store discussed the Buffalo campaign almost daily as it unfolded and that one reached out to the union after the National Labor Relations Board announced the initial results of the Buffalo elections in December. (The union’s second victory was announced Monday, after the labor board resolved ballot challenges.)

Ybarra said the victory showed workers it was possible to unionize despite company opposition. “The Buffalo folks became superheroes,” she said. “A lot of us spent so much time being afraid of retaliation — none of us could afford to lose our jobs, have our hours cut.”

Since three Buffalo-area stores filed for union elections in late August, workers have filed for elections in at least 15 Starbucks stores nationwide. At least 10 of the filings came after the union victory in Buffalo. “It was the day Buffalo announced they had a won a union that I said, ‘I’m going to try to unionize my store,’” Harris recalled.

Logan, the labor studies professor, said this pattern might be turning the conventional wisdom about labor organizing on its head. Unions have traditionally preferred to aim at companies with a relatively small number of large workplaces because unionizing these sites creates economic leverage: Striking at one of a dozen large factories can disrupt a company’s operations, while striking at one out of 9,000 stores makes no difference to a company’s bottom line.

But over the past few decades, victories at large, high-profile job sites have been less common — unions have lost elections at Boeing, Nissan, Volkswagen and Amazon facilities, although the labor board later overturned the Amazon result and called a new election. The Starbucks campaign shows that focusing on small workplaces at a high-profile company may be more effective, because a victory can build momentum nationwide.

“In terms of creating a moment for unions, if you organized 100 stores, it would be the biggest thing that happened in 50 years,” Logan said. Even if the direct economic impact on Starbucks is minor, he added, the media attention and political pressure on the company could be enormous.

Richard Bensinger, who oversees Starbucks organizing for the union representing its employees, Workers United, said in an interview that the goal of the campaign was to build support among workers nationally, to rally public opinion and ultimately to pressure the company to stay neutral so that any store whose employees wanted a union could easily get one.

“The real question is getting the country to stand up for David, not Goliath,” Bensinger said. “Every day, we’re getting more people — it’s getting stronger.”

Further benefiting the union are the economics of organizing workers versus the economics of persuading workers not to unionize. The costs of seeking an election at another store — such as legal filings whose arguments the union’s lawyers have already refined — are relatively modest. Starbucks workers themselves are the boots on the ground.

By contrast, if the company were to replicate its Buffalo approach, that could mean bringing in 10 or more out-of-town officials over a period of months.

Starbucks has dispatched a few out-of-town officials and area managers to a store in Mesa, Arizona, the only city beyond Buffalo where the labor board has set an election date. The company said that some officials there were addressing operational issues and that others were educating employees about what unionizing would entail, as in Buffalo. Some workers in both cities said they found the presence of these officials intimidating.

Starbucks has no shortage of cards to play in resisting unionization. Although companies must bargain in good faith with NLRB-certified unions, they are not required to agree to a contract, and negotiations could drag on for years. The company can also afford to spend large sums to discourage union organizing.

But the image-conscious company could eventually decide that risking an anti-union reputation is costlier than a more accommodating posture. “You don’t want to antagonize your customer base,” said Steven Swirsky, a management-side lawyer at Epstein Becker & Green. “They have created a brand with certain mystiques around it. You have to be sensitive to how to maintain that, not undermine it.”

Starbucks may also conclude that what it spends opposing unions is not money well spent. “When you’re making a resource commitment at some point, you have to realize there is a reason this is happening, and it may not be a reason you’re going to be able to fix soon enough to make a difference,” said Brian West Easley, a management-side lawyer at Jones Day.

Complicating the challenge is that the workers involved in organizing appear to be less interested in addressing specific problems such as staffing and pay — although those are certainly concerns — than in having more input at work. David Pryzbylski, a management-side lawyer at Barnes & Thornburg, said that of more than 100 campaigns he has handled, the union typically failed to even qualify for a vote when there was a specific economic issue driving the organizing, but tended to get much further when “employees don’t feel like they have a voice.”

Several Starbucks workers said that unionizing was not merely a means to improve their work lives but a goal in itself and that they supported a union as a matter of principle.

“One of the main things we want to have a union for is to establish the right to have a union — it’s a little circular,” said Ybarra, in Seattle. “They’re trying to discourage folks from creating any communal organization.”