Look for stocks to lose 30% from here, says strategist David Rosenberg. And don’t even think about turning bullish until 2024.

Goldman Sachs ups its near-term S&P 500 target due to brighter economic picture. But that could knock 25% off stocks, strategists say.

'People vote with their feet': Florida just became the fastest-growing state for the first time in 65 years — here are 3 top stocks to capitalize on this historical shift

Canoo Gets Cash and Stock Plunges. It’s Hard Being an EV Startup These Days.

Stock market is basically going nowhere for the rest of the year: Goldman Sachs 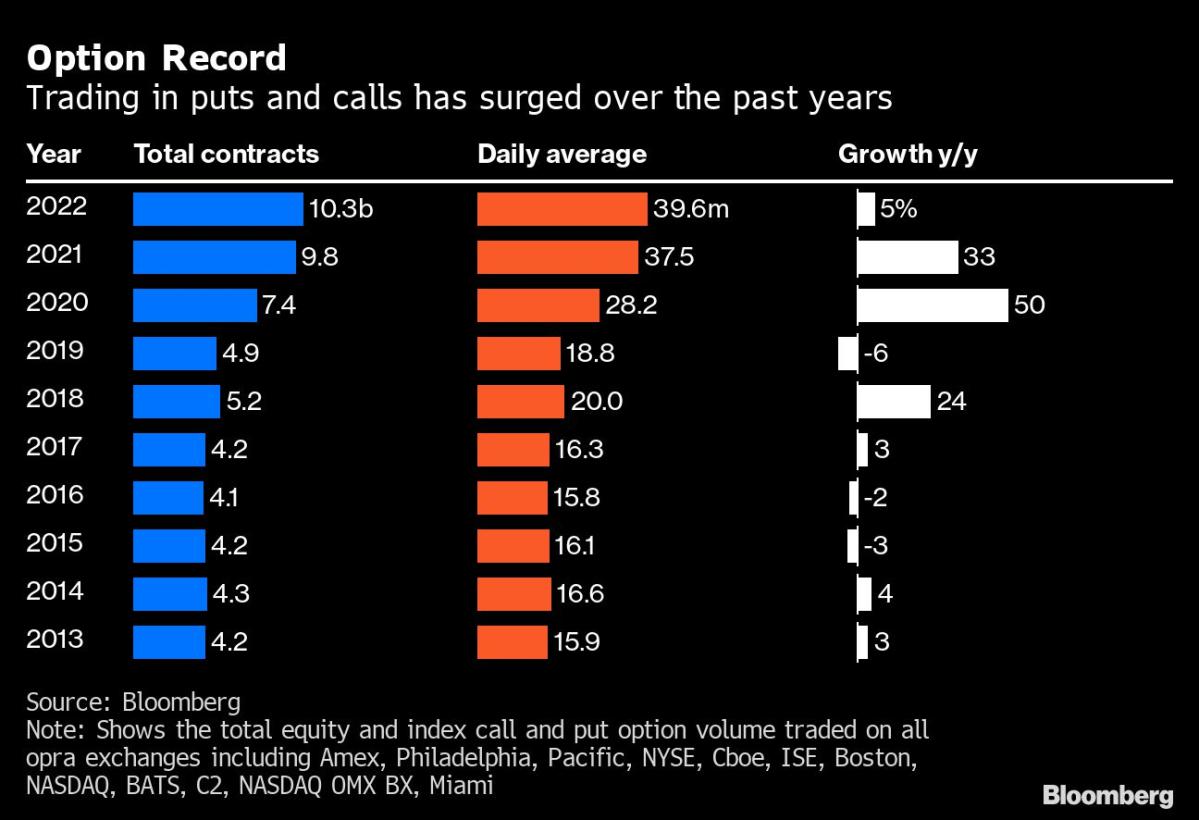 (Bloomberg) — The boom in stock market options shows no sign of let up, as the number of traded US contracts surpassed the 10-billion mark in 2022 for the first time ever, playing a role in the biggest equity rout in over a decade

For the third straight year, contracts in US single-stock and index options set a record, more than doubling from the level three years ago.

As the mood soured, trading in “puts” — contracts allowing holders to sell — soared by more than 30% compared to 2021, while that in bullish “call” options declined 12%.

Another feature was the explosive growth in very short-term contracts, sometimes maturing within 24 hours. Pinpointing exact volumes can be tricky but S&P 500 options expiring within one day comprised more than 40% of total volume over the third quarter, almost doubling from six months before, Goldman Sachs estimated.

This short-dated option market is increasingly drawing professional traders and algorithmic-powered institutions, especially around crucial data releases or central bank press conferences. With holders going in and out in a flash, such options are seen by many as contributing to volatility.

However, despite the overall record, year-on-year growth in options trading slowed, after rising by a third in 2021 and by a whopping 50% the year before.

The outsize increases of 2021 and 2020 are attributed to small-fry retail traders whose interest in tech shares and so-called meme stocks such as GameStop Corp. sparked huge demand for leveraged investments such as options and other derivatives. But during a year of steep equity losses, many of those participants were likely put to flight.

I retired at 50, went back to work at 53, and then a medical issue left me jobless: ‘There’s no such thing as a safe amount of money’

Betting on a Crypto Comeback; Analysts Bullish on These 3 Bitcoin Stocks

The State Attorney for Florida’s First Judicial Circuit, Ginger Bowden Madden, announced Monday that her office will seek the death...

Blinken tells Turkey to ‘let us know’ what U.S. can do after earthquake

By Humeyra Pamuk WASHINGTON (Reuters) – U.S. Secretary of State Antony Blinken told his Turkish counterpart to “pick up the...

Mets’ Steve Cohen fires back at other MLB owners who are mad at his spending: ‘They need to look more at themselves’

Steve Cohen stressed that he's playing within the rules set by other MLB owners.

Queen Letizia and King Felipe of Spain jet off to Angola

Queen Letizia and King Felipe IV of Spain looked harmonious as they wrapped up in matching black coats to jet...

UNITED NATIONS (AP) — The United Nations chief warned Monday that the world is facing a convergence of challenges “unlike...

Salma Hayek says she was ‘typecast’ for years: ‘You’re sexy, so you’re not allowed to have a sense of humor’

Tom Brady Poses in Just His Underwear to Complete a Bet: ‘Did I Do It Right?’

Harry Styles said ‘this doesn’t happen to people like me very often’ while accepting his Grammy for album of the year, an award that white men have won 32 times

Harry Styles won album of the year for “Harry’s House” at the 2023 Grammys on Sunday. “This doesn’t happen to...

When you have Billions, you might as well shoot for Trillions. Showtime is going all in on Billions as the...

The It List: Joe is back for more mischief in a new season of ‘You,’ Gina Rodriguez sees dead people in ‘Not Dead Yet,’ the stage is set for Puppy Bowl XIX on Super Bowl Sunday, and all the best in pop culture the week of Feb. 6, 2023

The It List is Yahoo’s weekly look at the best in pop culture, including movies, music, TV, streaming, games, books,...

Matthew McConaughey. As Elvis. As a secret agent. That’s the show.

Austin Butler is still chasing Oscars gold for the voice, but nipping at his heels is Matthew McConaughey, who’s slated...

Bubba Wallace said his back and neck hurt following the bumping and banging of NASCAR’s first event of the new...

Strip Manchester City of their titles? This is what I would do if they are guilty

If – and it must be remembered that it remains a very big if at present – Manchester City are...

The Super Bowl is back in Arizona, the site of two classic games. But which host city has had the...

Last-minute scrambling has been taking place all week to get into the richest WM Phoenix Open, with eight pre-qualifiers and...

Jesse Marsch gets sacked by Leeds, and becomes a fascinating USMNT coaching candidate

Jesse Marsch, the most high-profile American coach in European soccer, is out at Leeds United after less than a year...

Signs continue to point toward 49ers quarterback Brock Purdy undergoing elbow surgery that involves a six-month build-up toward returning to...

Tom Brady Sr. shares insight into why his son retired ‘for good’

Few know Tom Brady better than his father, Tom Brady Sr., who admitted he saw some pretty clear signs that...

A couple of basketball pundits believe the Warriors moving Jonathan Kuminga at the trade deadline would prove costly down the...