= Volvo Group unveils vehicle made with 3,000 kilos of ‘fossil-free’ steel
Skip to content
You are Here 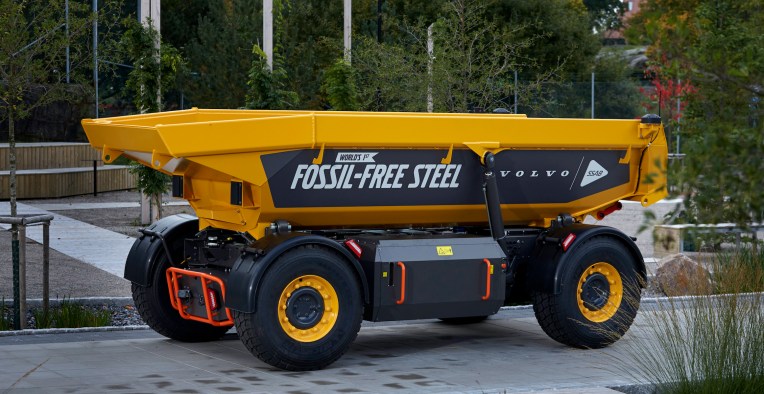 AB Volvo, the construction truck arm of Sweden’s Volvo Group, unveiled a new vehicle Wednesday made with a majority of “fossil-free” steel, plus plans to begin smaller-scale series production using the new material as early as 2022.

“Our intention is to start to build these vehicles, these relatively small-load carriers, utilizing this fossil-free steel,” Lars Stenqvist, executive VP of trucks technology at AB Volvo, told TechCrunch in a recent interview. “It’s important to say it’s not a research and development project or some kind of demonstration project to show up for politicians. This is serial production.”

The prototype vehicle, a fully electric and autonomous load carrier for use in mining and quarries, is composed of over 3,000 kilograms (6,600 pounds) of the new steel. Volvo said it targeted construction trucks first because, on average, around 70% of the vehicle weight comes from steel and cast iron.

The steel was manufactured by SSAB, a Swedish steelmaker with whom Volvo entered into a partnership earlier this year. Conventional steel manufacturing uses coal to extract oxygen out of the iron ore, but SSAB has developed a process to make steel using hydrogen. The hydrogen is produced via electrolysis, a process that uses renewable energy to split water into hydrogen and oxygen.

The load carrier unveiled today is not composed of 100% fossil-free steel, because SSAB doesn’t have access to certain geometries yet, like those needed to produce cylindrical shafts, Stenqvist said. He added that the majority of the components and particularly the large bucket on the back of the vehicle are fossil-free.

The steel from SSAB is identical in all ways to conventional steel, which means it can be used in all of Volvo’s existing manufacturing facilities. “This is a very, very important input to us, because that means that we are agnostic from a production and manufacturing perspective,” Stenqvist said.

Volvo, which has set a target of zero-emissions across its operations by 2040, is aiming to scale its use of the steel throughout the rest of the decade. Volvo Cars, owned by China’s Zhejiang Geely Holding, also plans to produce a concept car using the steel as soon as 2025.