Let’s talk about strapping guns to the backs of robots. I’m not a fan (how’s that for taking a stand?). When MSCHF did it with Spot back in February, it was a thought experiment, art exhibit and a statement about where society might be headed with autonomous robotics. And most importantly, of course, it was a paintball gun. Boston Dynamics clearly wasn’t thrilled with the message it was sending, noting:

Today we learned that an art group is planning a spectacle to draw attention to a provocative use of our industrial robot, Spot. To be clear, we condemn the portrayal of our technology in any way that promotes violence, harm, or intimidation.

It’s precisely the sort of thing the company tries to get out in front of. After decades of killer-robot science-fiction, it doesn’t take much to make people jump any time an advanced robot enters the picture. It’s the automaton version of Rule 34 (in staunch defiance of Asimov’s First Law of Robotics): If a robot exists, someone has tried to weaponize it.

As I’ve said in this very column, I’m glad we’re having these conversations now, and I’m happy people are skeptical when the NYPD trots out a branded version of Spot. I also think it’s important to note, for example, that police departments have been using robots for years to perform dangerous tasks like bomb detection. A majority of us would probably agree that saving people from exploding is a good use for a robot.

I’m glad Boston Dynamics continues to vocalize its opposition toward using the robot for harm (what constitutes intimidation, when it comes to headless quadrupedal robots, is another conversation altogether). Spot’s makers — along with a wide swath of the robotics industry — cut their teeth on DARPA-funded projects. I’d say there’s a pretty big gulf between building a robotic pack mule and a mobile weapon, but these are precisely the sorts of things you need to bake into a mission statement.

Don’t forget to sign up to get the upcoming free newsletter version of Actuator delivered to your inbox.

For this Ghost Robotics dog on display at the Association of the U.S. Army convention in D.C. this week, I’d say intimidation is probably the best-case scenario. I’ll let the rifle’s maker, SWORD Defense Systems, speak for themselves here:

The SWORD Defense Systems Special Purpose Unmanned Rifle (SPUR) was specifically designed to offer precision fire from unmanned platforms such as the Ghost Robotics Vision-60 quadruped. Featuring safe, chamber, clear, and fire capabilities that allows for safe and reliable deployment of the weapon system – providing the operator an ability to load and safe the weapon at a distance.

If that doesn’t send a cold shiver down your spine, I don’t know what to tell you. Is it ethically that far removed from the attack drones the military has been using for bombing campaigns for decades now? Potentially not. But I’m not a fan of drone strikes, either.

Ghost Robotics certainly can’t be accused to obfuscating its military connection. A solider walking around with the Ghost Vision system is the first thing you see when you visit the company’s site. However you feel about the DoD’s budget, defense funding has historically been a huge part of keeping robotics companies afloat, long before VCs were pumping money into the category. Ghost’s site breaks things down accordingly into defense, homeland and enterprise. A recent highly publicized 5G deal with Verizon falls into the latter.

Recent coverage has highlighted the robotic dogs’ use for patrolling warzones — not dissimilar from Spot’s functionality in that case. But mounting a gun on the robot changes the math considerably here. There are a lot of questions — I’ve reached out to Ghost Robotics with some preliminary ones. But this surely isn’t the last we’ll be hearing about this setup.

In non-unmanned-rifle news, Dexterity continues to make waves with another large raise. Just over a year after coming out of stealth with $56.2 million, the Bay Area-based firm is clearly striking while the iron is hot, as interest in automated fulfillment has spiked during the pandemic. Four years after launch, it just raised another $140 million at a $1.4 billion valuation.

The company has been running its systems in the real world for two years now, moving a wide range of different objects, including, “loosely packed deformable polybags, to delicate hot-dog buns, to floppy tortillas, to poorly sealed cardboard boxes, to bags of earthworms, to trays and crates of consumer food, to even a molten birthday cake.” Dexterity plans to use the money to continue the deployment of its first thousand robots. 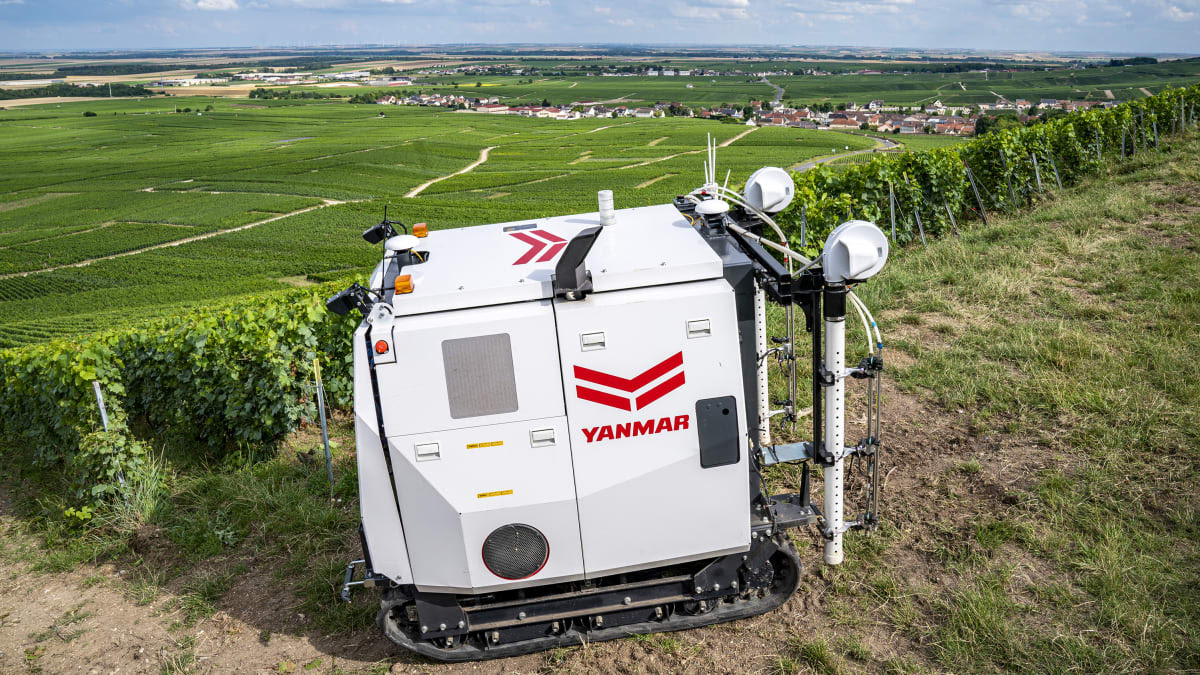 Closing us out this week is the Yanmar YV01, an autonomous spraying robot designed specifically for vineyards.

“YV01 offers cutting-edge autonomous technology and is flexible, lightweight and environmentally-friendly as it ensures highly accurate spraying on vines,” Yanmar Europe President Peter Aarsen said in a release. “It can be safely and simply operated by a nearby supervisor and it is ideally suited for vineyards which have narrow pathways and where the vines are not tall.”

Currently being tested in (where else) Champagne-producing Épernay, France, the system will go on sale next year.