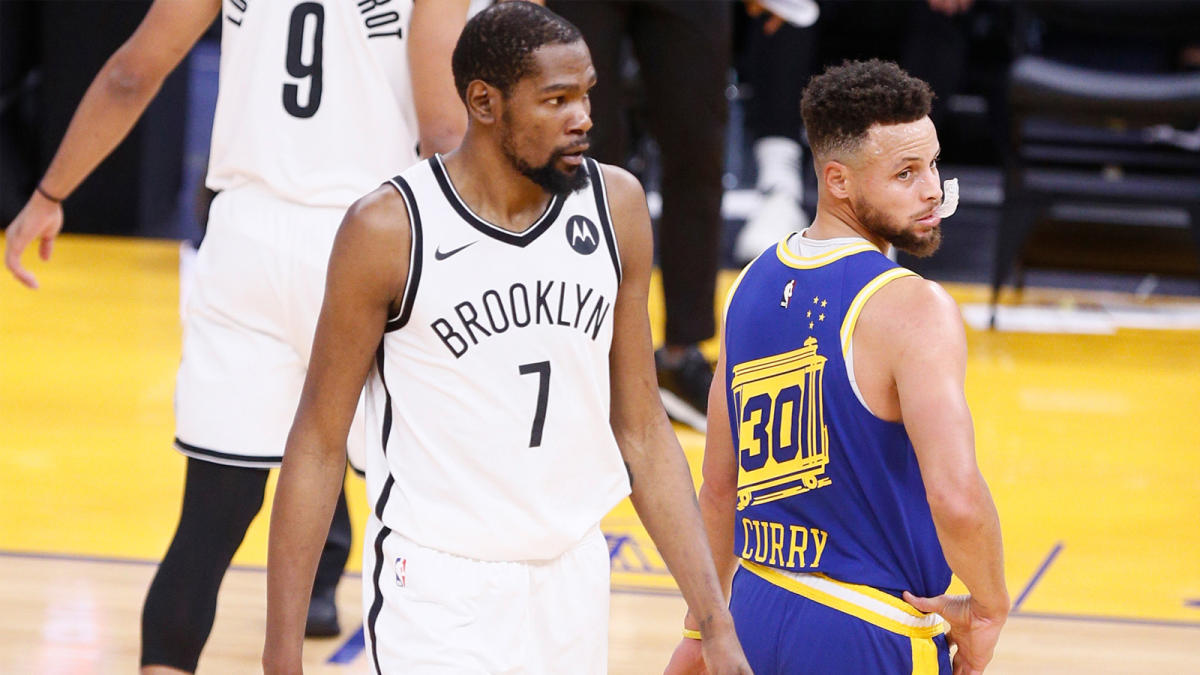 With the defense frequently inattentive and the offense beyond Stephen Curry often devolving into hoops anarchy, the Warriors’ front office is obligated to explore every possible avenue that could lead to solutions.

Kevin Durant, even though simultaneously happy and frustrated in Brooklyn, is looking pretty good, eh?

It’s a long shot, to be sure, for various reasons, including a roster overhaul that would nullify three years of draft strategy, the natural anxieties that come with having two players over 30 with Achilles tendon repair histories, and the fact that the Nets would have to embrace the large salary not attached to Curry or Andrew Wiggins. Curry won’t be traded ever, and Wiggins, having signed a four-year contract extension in October, can’t be traded before October 2023.

To put a fine point on it, one of the big contracts going out would have to belong to Draymond Green — who could opt out in July — or Klay Thompson. Each has the maximum 15 percent trade kicker.

The Warriors briefly pondered the notion of a Durant reunion during the summer, after he requested a trade from the Nets, but stayed on the course drawn up after the 2019 NBA Finals. With Durant gone to Brooklyn and Thompson sure to miss the 2019-20 season, Golden State’s front office chose to steer away from the past and toward the future, even at the risk of disrespecting the present.

They drafted Jordan Poole one day after his 20th birthday in 2019, hoping he could develop into a reasonable replacement for Curry. They drafted James Wiseman, who was 19, in 2020 as protection against quality young centers in the Western Conference. And then, in the summer of 2021, the Warriors revamped their player development program — even importing a coach from Serbia — and drafted two more teenagers, Jonathan Kuminga and Moses Moody, in 2021.

Rather than invest in the present, meaning adding quality veterans, the Warriors took the cheaper but reasonable option of investing in those who could cultivate the young into the future.

Then came an unexpected development: The Warriors won the 2022 NBA championship — and did it mostly behind the veterans. Wiggins and Poole were major contributors, but the postseason aptitudes of Curry, Green and Thompson carried the team to the top.

Well, now, Golden State’s “present” was, stubbornly, still good enough for it to be the last team standing. Curry, in particular, was tremendous in the postseason. Wiseman, rehabbing in the wake of knee surgery, watched from the sideline. Neither Kuminga nor Moody was consistently in the playoff rotation.

So now the Warriors — with a 6-9 record and losses to the bottom three teams in the Eastern Conference — are forced to consider the value of their present core versus the prospects of their future core.

And those prospects aren’t showing enough to make it an easy decision. Wiseman is in the G League. Rotation minutes for Kuminga and Moody depend on the team’s general health and the opponent. Curry spent the first month of the season proving he is better than ever, scoring and rebounding at career-best levels, posting his highest assist average in six seasons and his lowest turnover rate since his third season.

And there is this: Lacob still aches from Durant’s departure and has said no one else will wear KD’s No. 35. Speaking in 2019, a few weeks after Durant signed with Brooklyn, Lacob was puzzled by decision and came up empty in his search for the logic behind it.

“I don’t understand it,” Lacob said. “I don’t know if I’ll ever understand it. He had everything he wanted right here. Why would he want to leave?”

Though Lacob never wanted Durant to leave, others in the organization were more ambivalent, having experienced the day-to-day turmoil and unrest that existed in the 2018-19 season. But now, well, all minds have good reason to be wide open.

Particularly when Durant, in an interview with Bleacher Report’s Chris Haynes this week, expressed his frustrations with the Nets. It was evident that KD wants the Nets to be more like, yes, the Warriors.

“I want us to be respected out here in the basketball world,” Durant said.

The Warriors during the KD years were hated by some outsiders, feared by others but respected for their ability to dominate games at both ends. The Nets, with a healthy and available Kyrie Irving, gained respect on paper but lost a lot when he and Durant — good friends who engineered their way to being teammates — were swept from the playoffs in the first round last April.

“I don’t want players to look at us and say, ‘Oh, man, these [expletive] are full of s–t.’ That’s not the type of team I want to be on,” Durant told Haynes. “So, when you’re playing like s–t, you know the one person they’re going to look at. That’s why I requested a trade.”

The trade request was rescinded, but Durant was candid in his assessment that the Nets, with a 7-9 record after their win Thursday in Portland, are relying on a starting lineup that’s nowhere near the NBA elite.

RELATED: Stephen A believes KD trade could save Steph

What if the losses keep coming?

Durant, 34, probably would like to re-enter that cone of stability and professional environment provided by the Warriors, who deftly sprinkle humor with their businesslike approach.

Even though it would mean losing a big-ticket vet, some youth and future considerations, the Warriors are too smart to totally dismiss the possibility of a lineup that includes Curry and Durant.

Especially if the losses keep coming.

World Cup 2022: Inside the USMNT’s ‘unbelievable’ Qatar hotel on a $15B man-made island