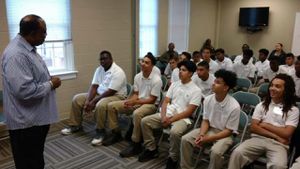 A Gwinnett County nonprofit diversion program that celebrated the graduation of a group of teens considered at-risk on Saturday is hoping to expand amid an increase in violence in area schools.

Seeking the Right Amendable Path, also known as STRAP, was founded by Gwinnett County Sheriff’s Deputy Steve Cooley and Gwinnett County Juvenile Court Judge Rodney Harris in 2012. Saturday, they graduated more than 850 teens that have typically joined the program as a condition of their juvenile court case.

“If I were to keep continuing the bad lifestyle I had, I would probably be maybe in prison, maybe somewhere bad,” Andrew Altamirano, 15, who graduated the STRAP program Saturday along with 13 others told Channel 2′s Matt Johnson.

Altamirano was in middle school when he says an altercation with another student landed him in serious trouble.

“I really thought I would be labeled as like a criminal or a bad person,” he said.

As part of his case, he was ordered to attend the six month diversion program offered through STRAP. It involves weekly meetings that feature classes that touch on topics from money management to accountability. If a student can’t attend or cooperate, the student must go back to court and meet with their probation officer.

Cooley says he wanted to make a difference 10 years ago after seeing so many juveniles enter the court system while accused of crimes.

“I started wondering what was possible to help their situation,” he said. “When kids finally find out that there are choices and consequences, they start to make better decisions.”

On Saturday, STRAP held a virtual graduation for 14 young men and women considered at risk – with some having been previously arrested. Gwinnett County’s District Attorney Patsy Austin-Gatson, among other prominent attorneys and law enforcement personnel congratulated the graduates for completing the six month program.

There are two field trips that the students take that are eye-openers and life-changers every year, according to Judge Harris.

“The trip to the jail gives them a different perspective than the one they heard from their buddy,” he said. “Sometimes during the tour there’s a 16-year-old or a 17-year-old over there, and they’re looking like, ‘Whoa.’”

Harris and Cooley also take the teens to the morgue to show the potential consequences for following down a path of violence.

“I wasn’t really thinking about the consequences of my actions,” said 17-year-old STRAP graduate Grant Ellenburg. “This has definitely given me more motivation in school and I believe it’ll help me become a better adult.”

“I think it’ll be an asset to the community because the more kids you get in touch with the better off you’re going to be,” he said.

For some recent graduates, they say they’re looking toward a future they didn’t have before.

“I’m going to start going to class on time, not hanging around people I used to,” said Altamirano, “and just doing stuff to better your day and better yourself.”